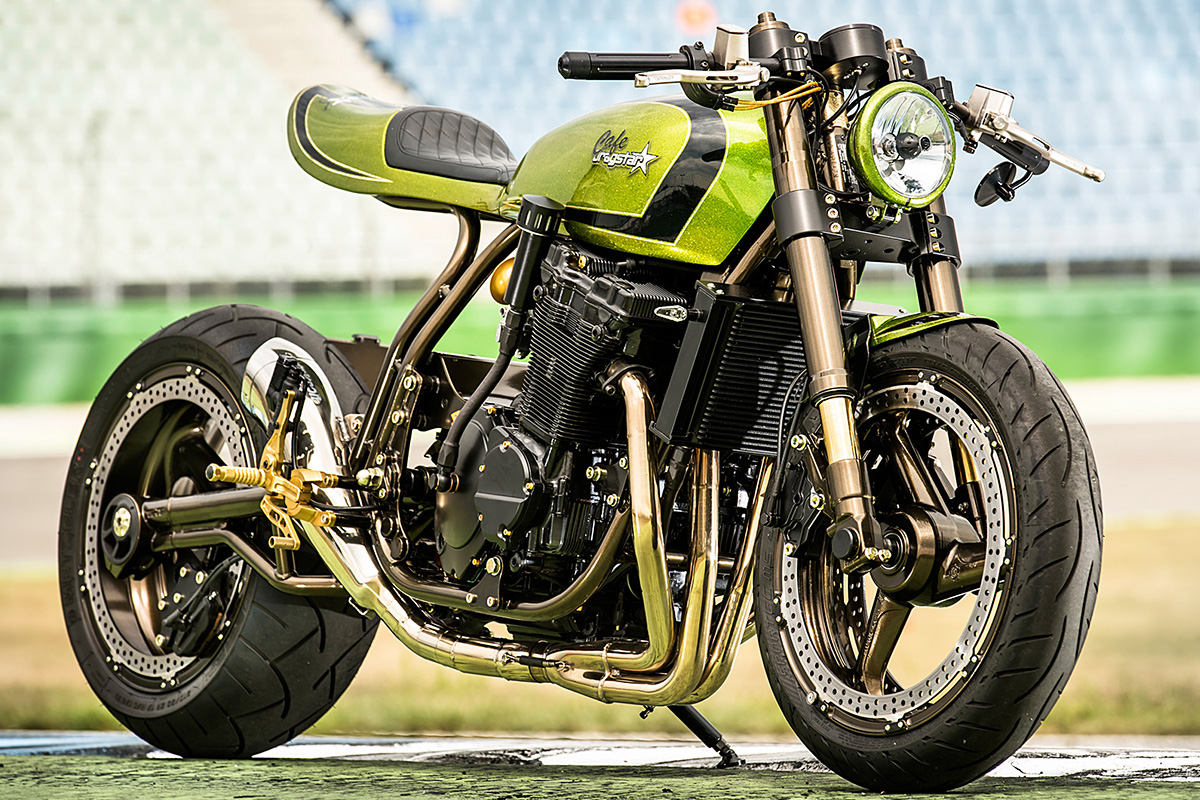 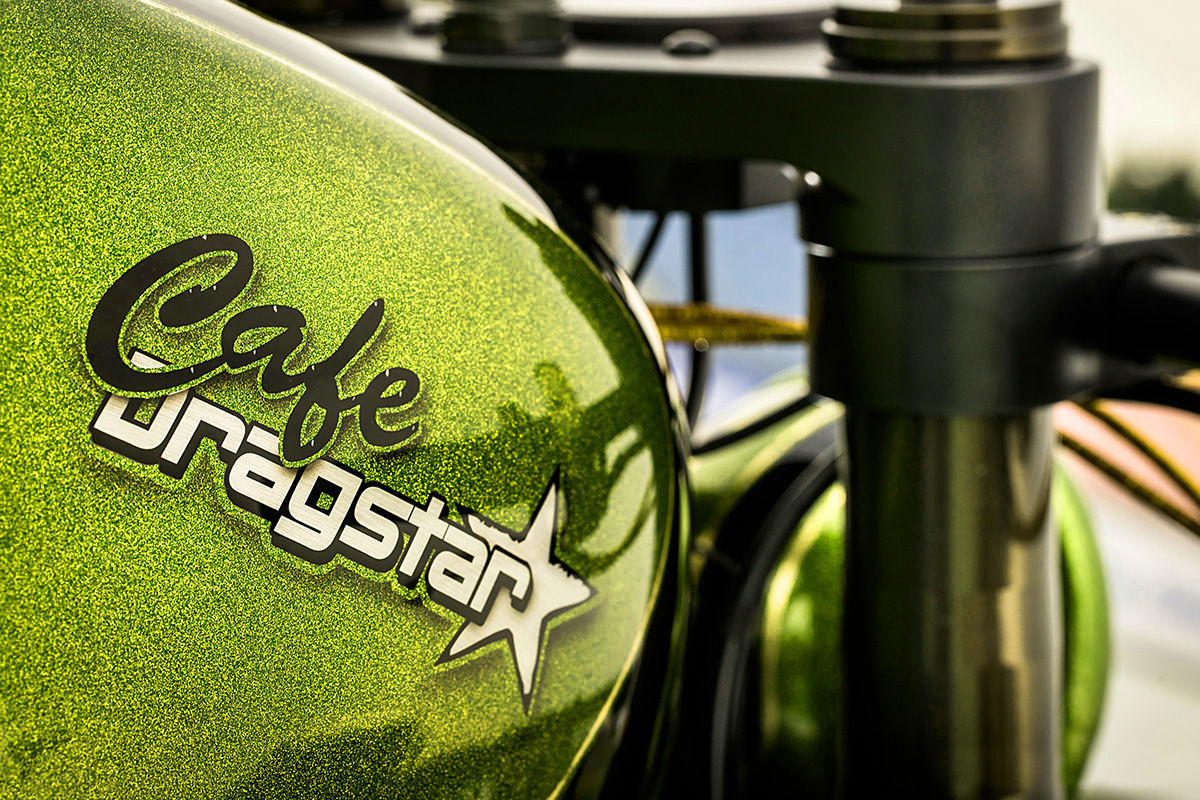 Using a traditional cafe racer build approach Wolfgang built the Dragstar by transplanting an engine into an alternate frame. The frame he chose for the task was that of a 1982 Kawasaki Z1000 ST. The ST was Kawasaki’s first shaft driven motorcycle and it featured a larger cradle frame with extra gussets in the rear and around the headstock to cope with the stresses of the shaft drive. While Wolfgang had no interest in running a shaft on this bike, he was planning on transplanting a high powered engine into it, so the extra strength was a plus. 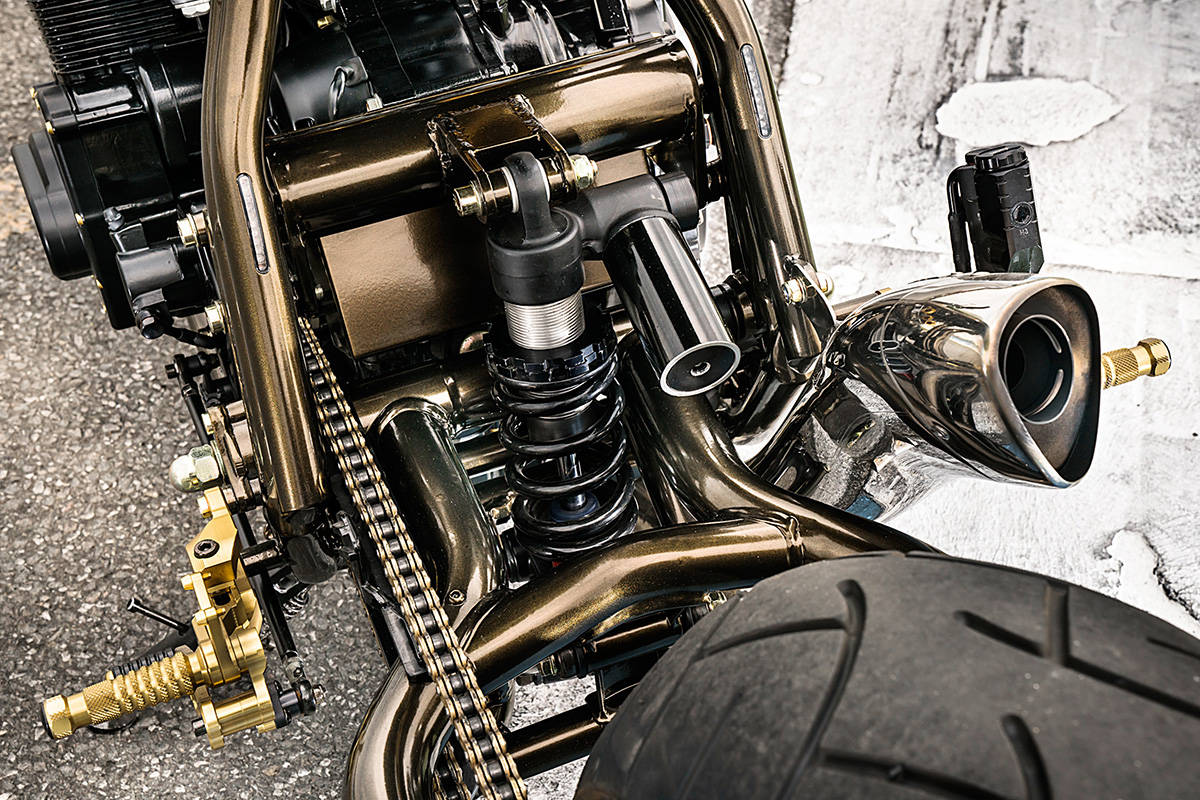 While the ST frame may have been the ideal choice for the project it didn’t go untouched during the build. Wolfgang cut away the rear subframe and replaced it with a revised design that could carry his new tail end and allow the fitment of a different swingarm. The swingarm, which is 7cm longer than stock, is from a Benelli TNT and is attached to the bike via a Benelli Tornado mono-shock. To complete the suspension package a Suzuki TL 1000R set of forks was then mated to the front end using custom made triple clamps. The Dragstar rolls on 17-inchwheels with 3.5 inches of rubber at the front and an ample 7 inches at the rear. The rims themselves were custom items designed by Wolfgang and have been finished in the same BMW X5-esque ‘sparkling brown’ paint as the swingarm and frame. 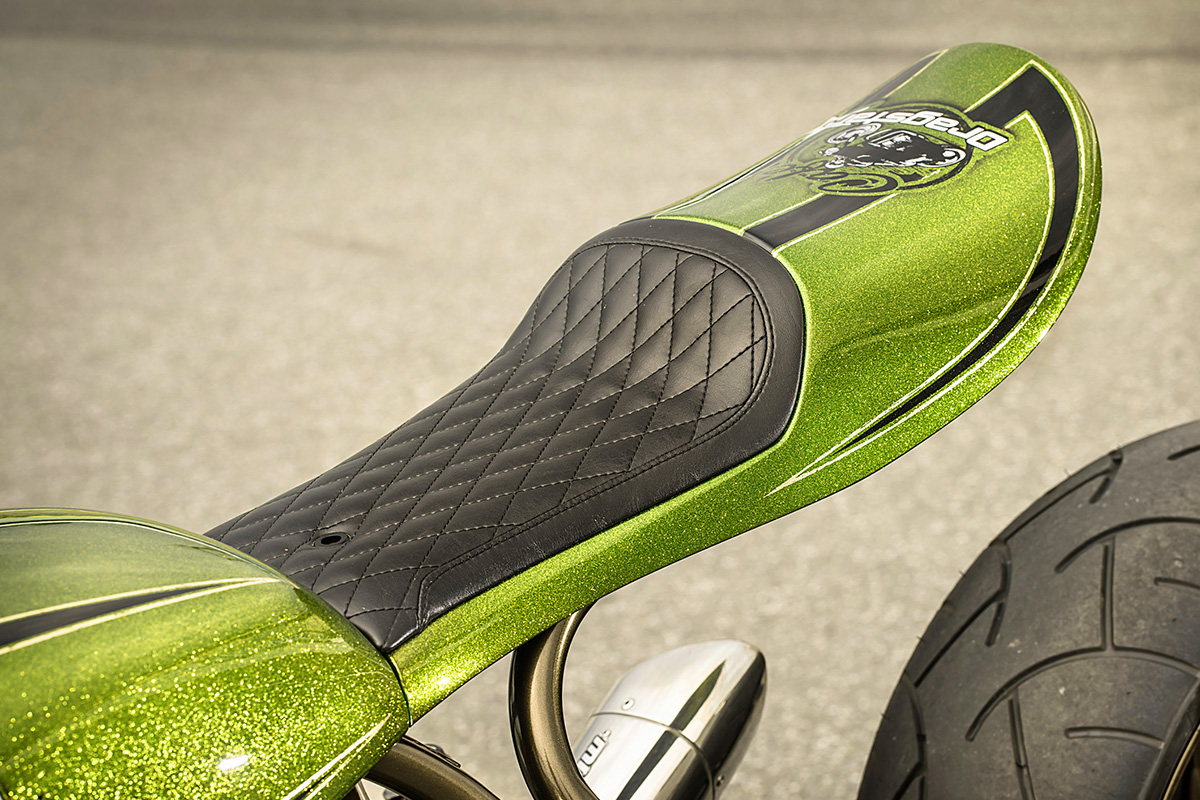 The engine Wolfgang selected for the bike was sourced from a Suzuki GSXR 1000. While in its standard configuration the engine provided decent performance, but it wasn’t enough to satisfy Wolfgang’s “high powered cafe racer” goal. To get the engine up to spec it was sent to local performance experts ‘Racers Warehouse’ for a big horsepower makeover. During the rebuild, capacity was increased to 1280cc and a Setrab oil cooler was installed to keep internal temperatures in check. A foursome of 36mm Mikuni TMR carbs were been mated to the inlet ports and tuned to compliment the custom stainless exhaust and Micron muffler that Wolfgang pieced together. After its final tune and installation, the engine produced a whopping 160bhp at the rear wheel, making every inch of the 7 at the rear have to work extra hard to maintain traction. 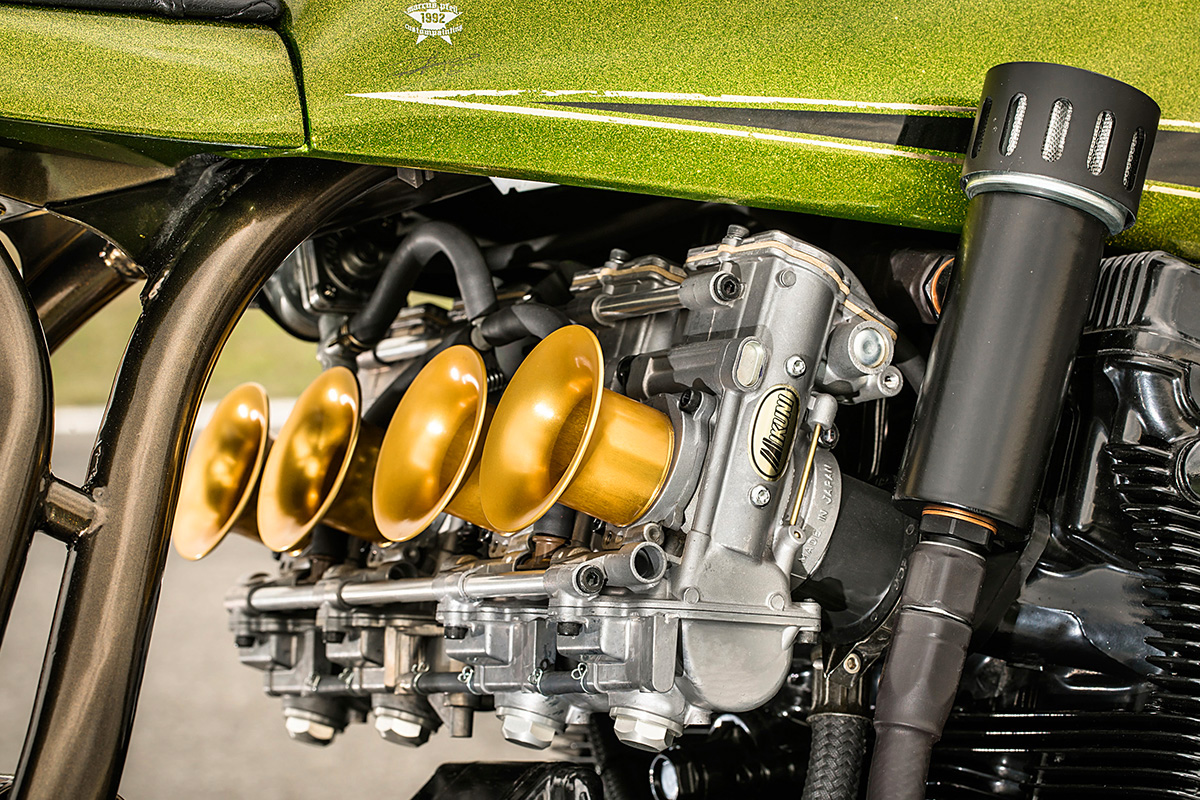 With all that power on tap, the bike required a robust braking system. Rather than filling each rim with huge discs Wolfgang opted for a radical looking perimeter disc set up, running two 420mm discs on the front and one at the rear. Each caliper is held in place using custom made bracketry and are actuated by Beringer levers and reservoirs. 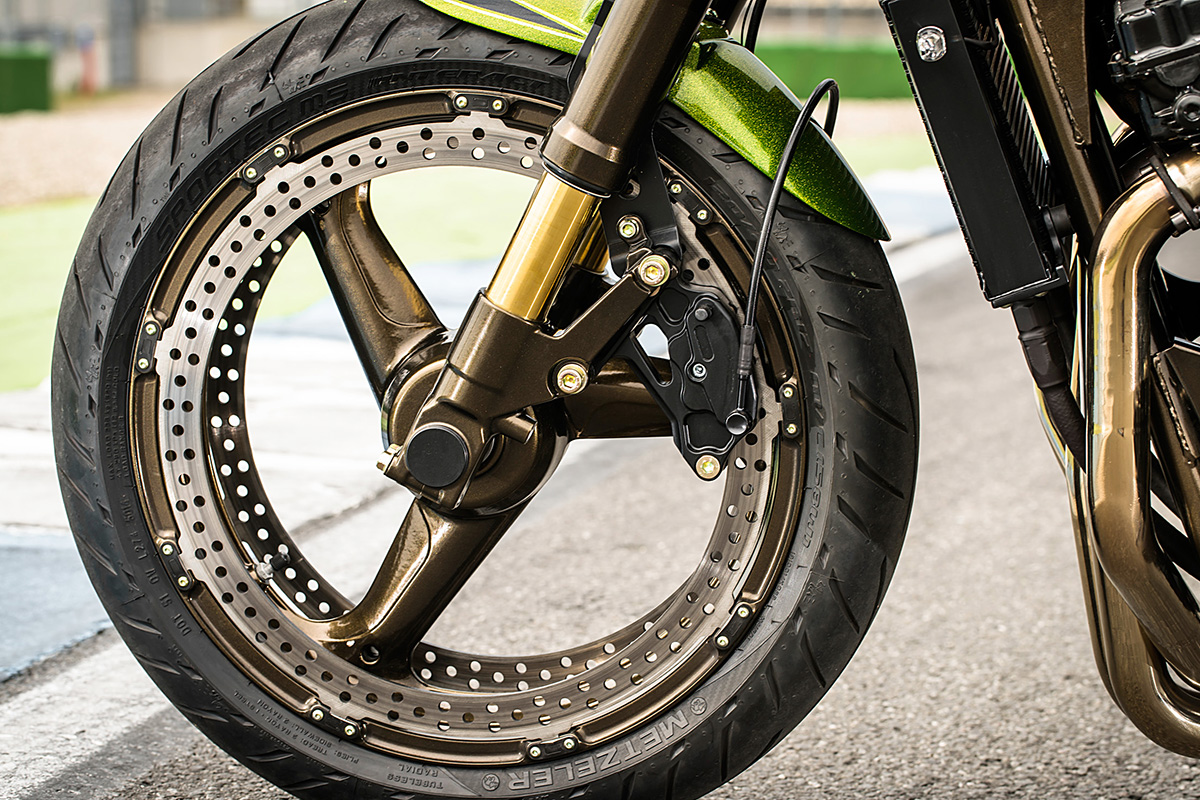 Wolfgang built many of the custom parts found on the Dragstar himself. Along with the parts already mentioned he also fabricated the bikes clip on handlebars and it’s svelte, upswept tail from scratch. The fuel tank was taken from a Kawasaki Z650 that he modified to fit the frame and the headlight is a Harley Davidson item. A single Motogadget Chronoclassic gauge sits snuggly into his custom triple clamp and a pair of gold-plated Gilles VCR footpegs position the riders feet appropriately. 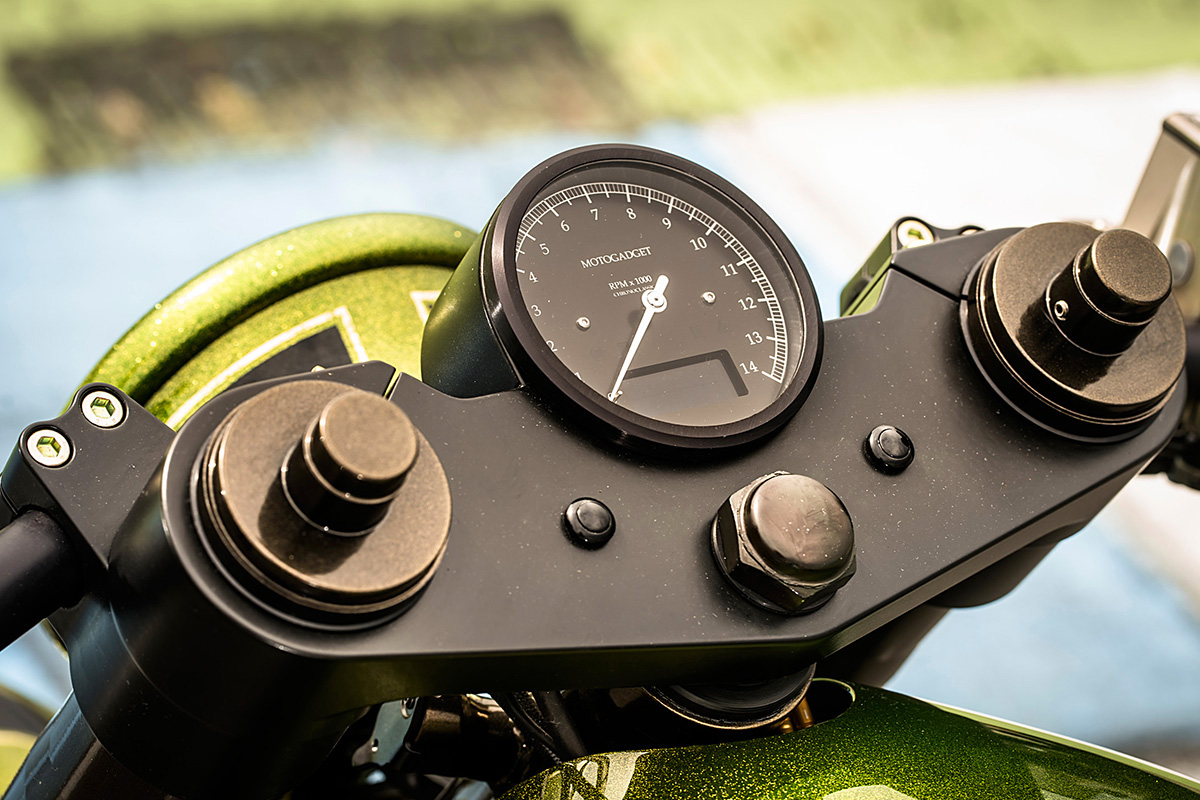 When it came to painting the Dragstar Wolfgang decided on a colour scheme that was common to both Kawasaki and Suzuki. The flaked green and black paint was laid by his good friend Marcus Pfiel along with the custom decals sporting the bikes name. Gold details such as the footpegs, engine bolts, chain and velocity stacks compliment the tubes of the forks and tie in nicely with the gold flecks on the frame. The final outsourced component of the build was the seat upholstery which was the work of local upholstery pros, Ledermania. 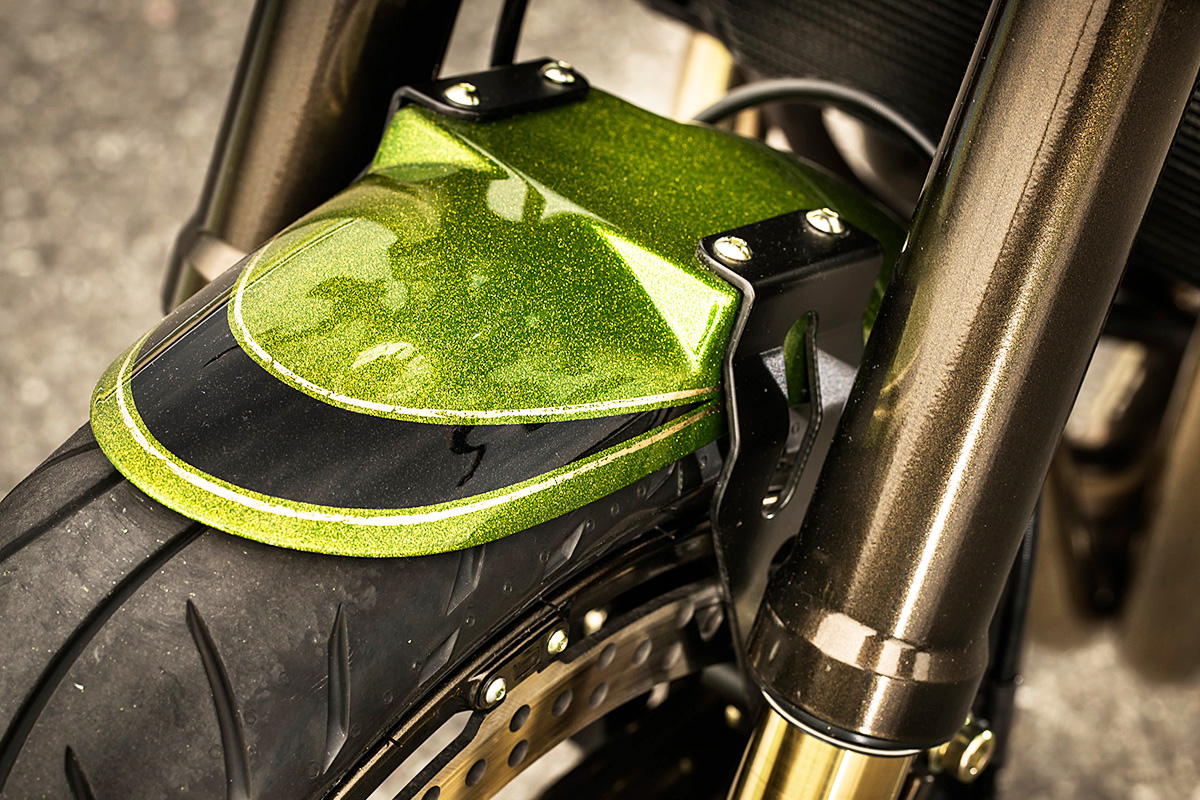 Of all the work done putting the Cafe Dragstar together the stage of the build Wolfgang is most proud of getting the Dragstar approved by the German Association for Technical Inspection, making riding it on the road legal. So if you’re ever speeding along a German motorway and you’re overtaken by a glittery green streak you’ve probably just been passed by a Custom Wolf creation. 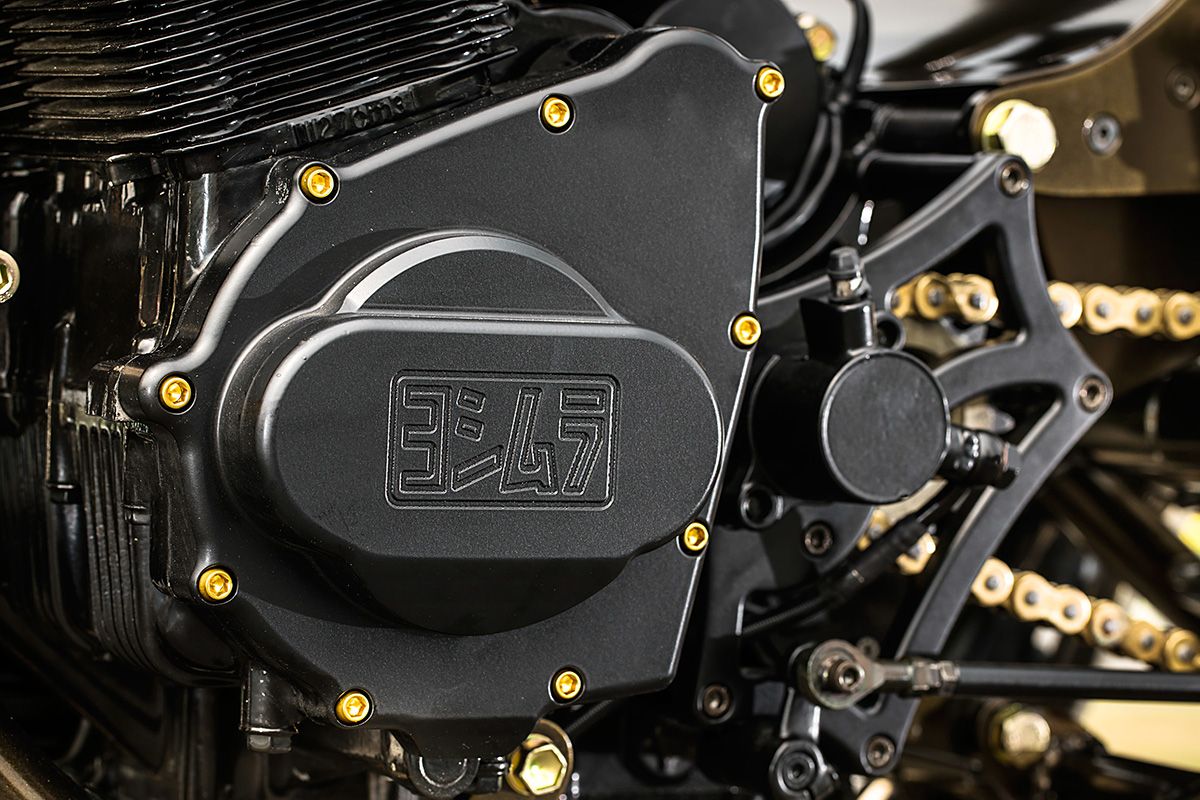 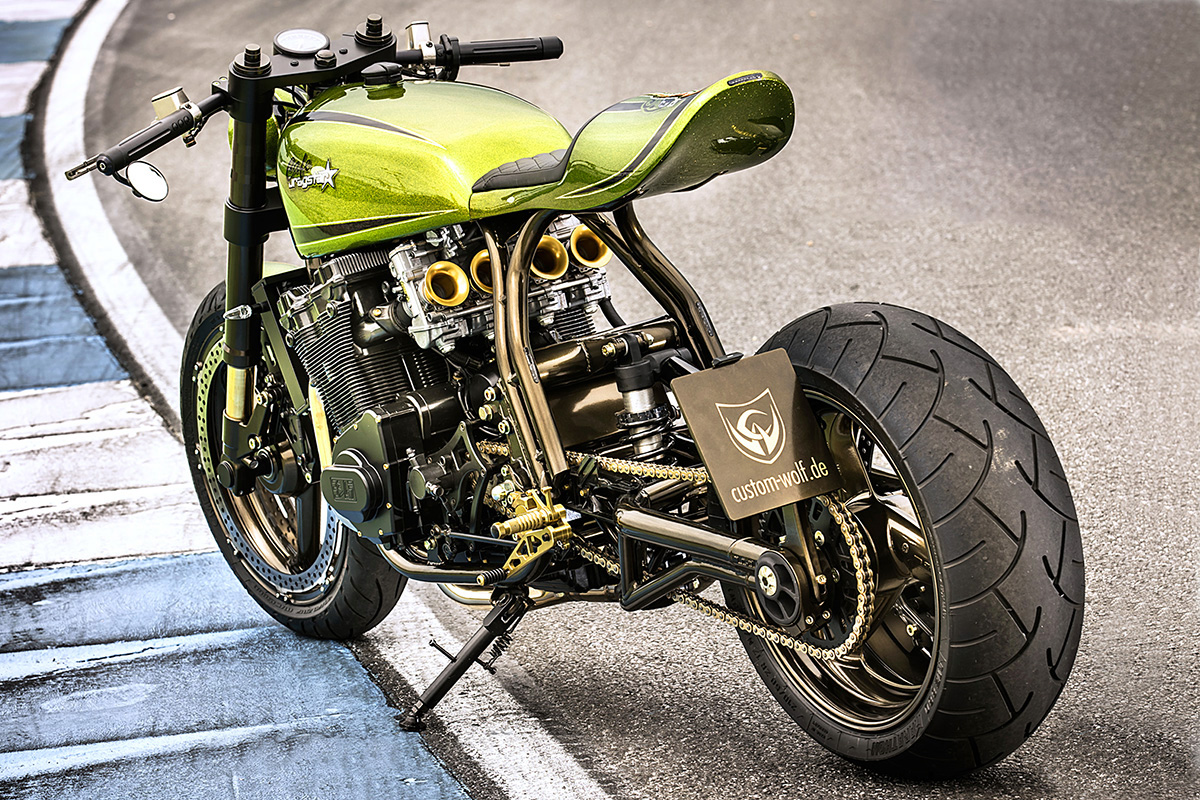 With 30 years of custom motorcycle building under his belt, Wolfgang Batz isn’t about to be influenced by other people’s ideals. As a graphic and industrial designer, he’s developed his own aesthetic and has the skills to conceptualize and fabricate his own components. His latest work is by no means your average, run of the mill cafe racer, much like the other bikes he builds at his ‘Custom Wolf’ workshop. The bike started out as a personal project giving him the freedom to do whatever he wanted with it. When he was asked to sell it mid-build it was the customer’s willingness to allow Wolfgang to finish it his way rather than the wad of cash he was waving that sealed the deal. After 2 years of hard work the result is a one of a kind, high powered cafe racer that Wolfgang has named his ‘Cafe Dragstar’.