Growing up in India the Sinroja brothers, Rahul and Birju, developed an out of the ordinary love for motorcycles. In a country where the motorcycle is generally regarded as nothing more than a form of transport, the brothers enjoyed performing basic custom work on their own bikes. Their family’s manufacturing business offered the brothers the chance to learn how to operate workshop machinery so they would fabricate their own parts to realise their custom creations. When the Sinroja family relocated to England Rahul’s passion for motorcycles and mechanics lead to him studying mechanical engineering. Then in 2015 when the time was right he purchased his first project bike and launched his Sinroja Motorcycles workshop with his brother Birju.

Their first bike, the R1, was a BMW R80 based Scrambler that helped put them on the map. The bike featured extensively online and in print, eventually catching the attention of a customer in Dubai where the bike now lives. The R2 and this bike the R3 are also based on airheads, which have become a favourite platform for the brothers, but this bike moves away from the scrambler styling of the previous 2 to have a more cafe racer inspired design. 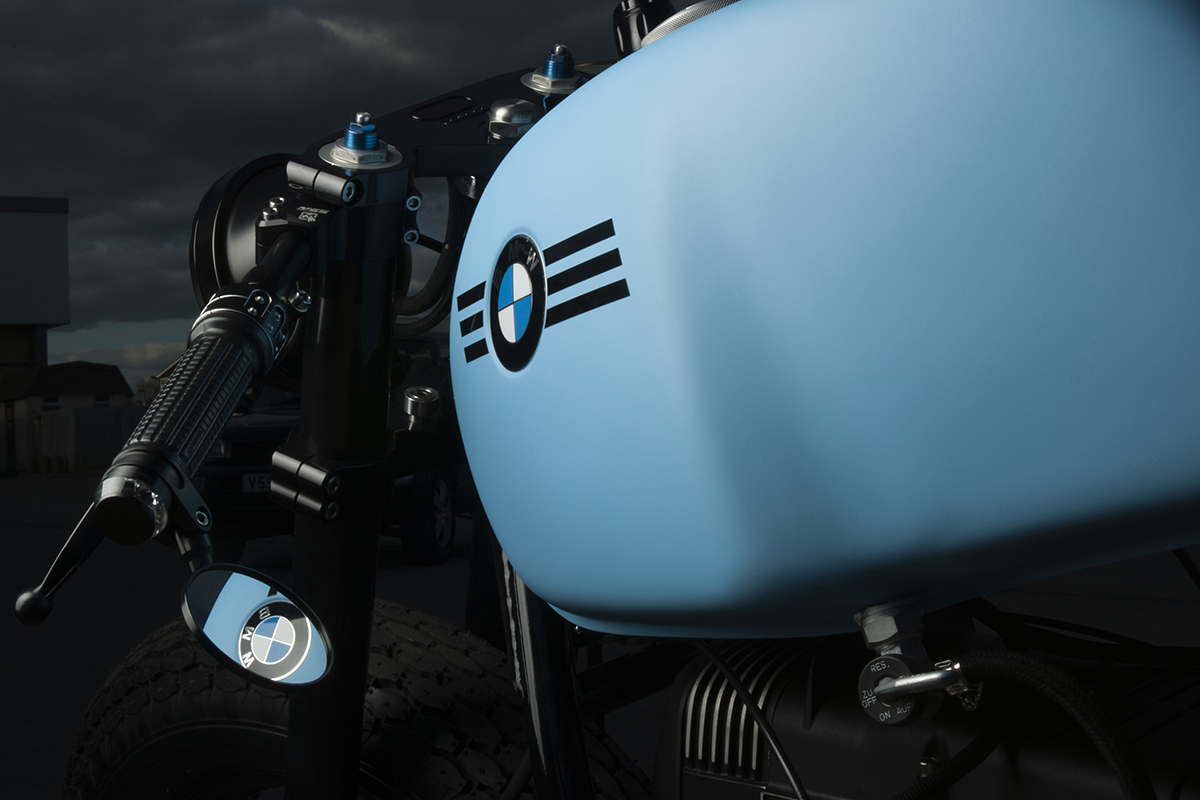 After making the decision to present the R1 at The Bike Shed show in London an eager show-goer by the name of James approached the brothers. Infatuated by the level of detail they’d put into the bike James was keen to get a Sinroja project of his own underway. A few days after the show James paid Rahul a visit to discuss the build. “We decided the bike was going to have a cafe racer stance with custom welded subframe, clip ons, fat tyres, wire wheels, a crazy exhaust, Motogadget electrics and a dark theme with contrasting flat babyblue paint.” says Rahul. “With these few things in mind we started shopping for the donor. We found a nice ex-police BMW R80 which ticked the spoked wheels box”. 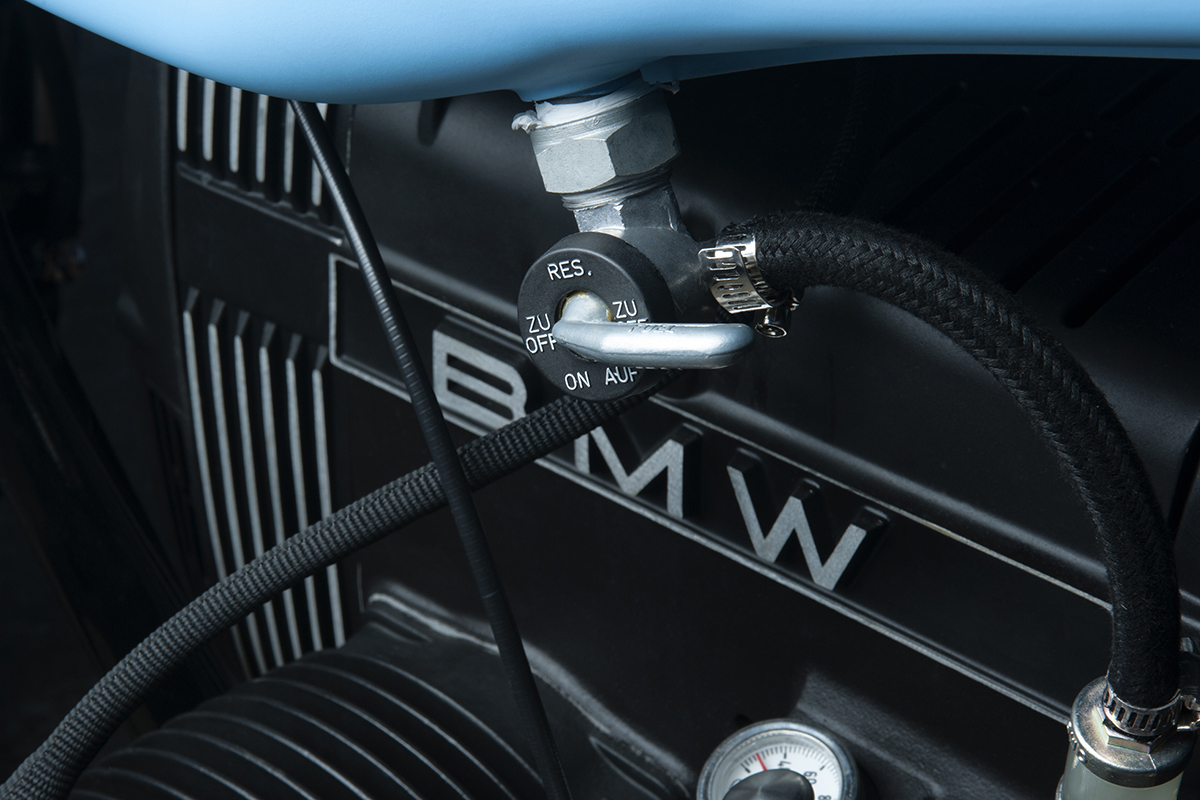 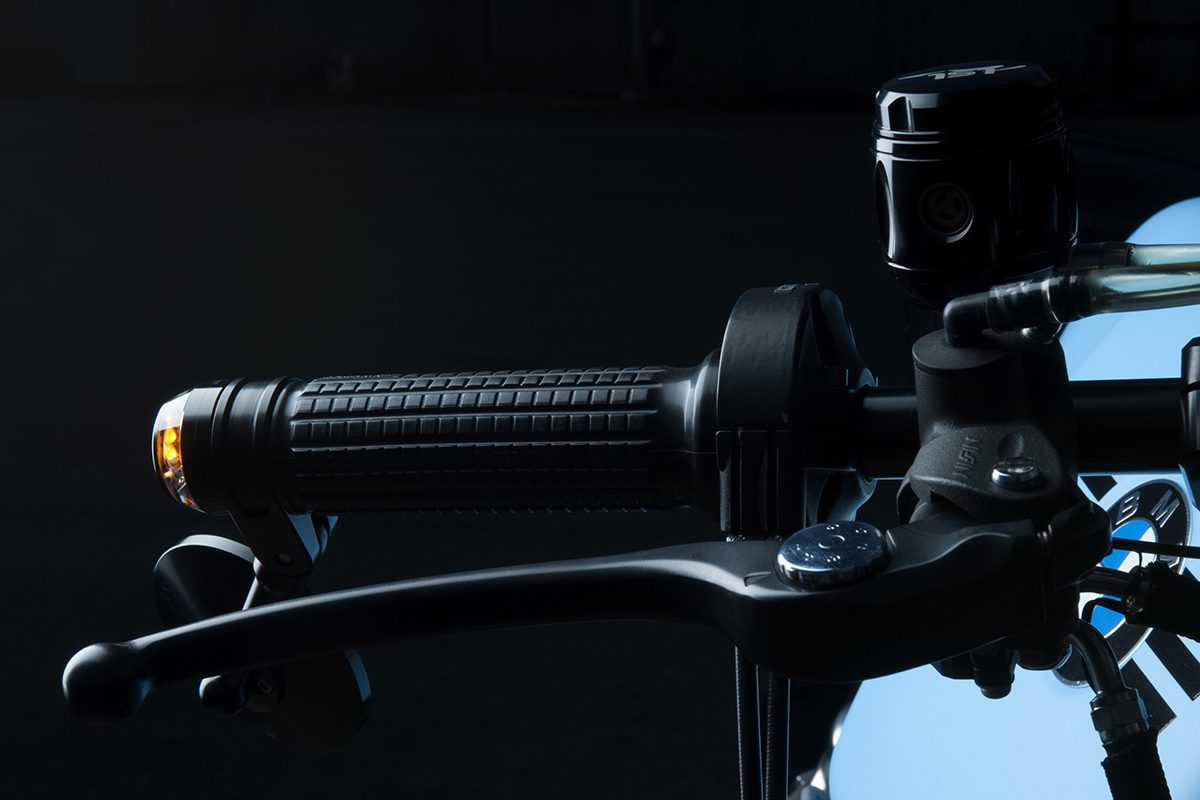 Around 6 weeks into the build with the R80 now in pieces James met up with Rahul once again. Although the wheels were right he expressed concern that the R80’s engine wouldn’t provide the riding experience he was after. After considering installing expensive upgrade kits Rahul made the huge decision to move away from the R80 to ensure his customers satisfaction.

“So we were back to square one, but a friend came to the rescue” says Rahul.  “He sold us his 1993 BMW R100 R Monolever. This new platform meant we could fit even bigger tires without much modification, still have wired wheels, a 1000cc engine and carb set up and a monoshock, which James also preferred.” With the new donor ready to go Rahul was confident that it was smooth sailing ahead, until the local council came knocking. Unfortunately a disgruntled neighbour had taken it upon themselves to ruin all the fun and report Rahul for operating his workshop out of his residential property. This devastating blow resulted in a further 2 month delay while the boys searched for a new workshop. It was a disappointing turn of events, but one that ultimately put them in a better position and the build of the R3 could finally continue. 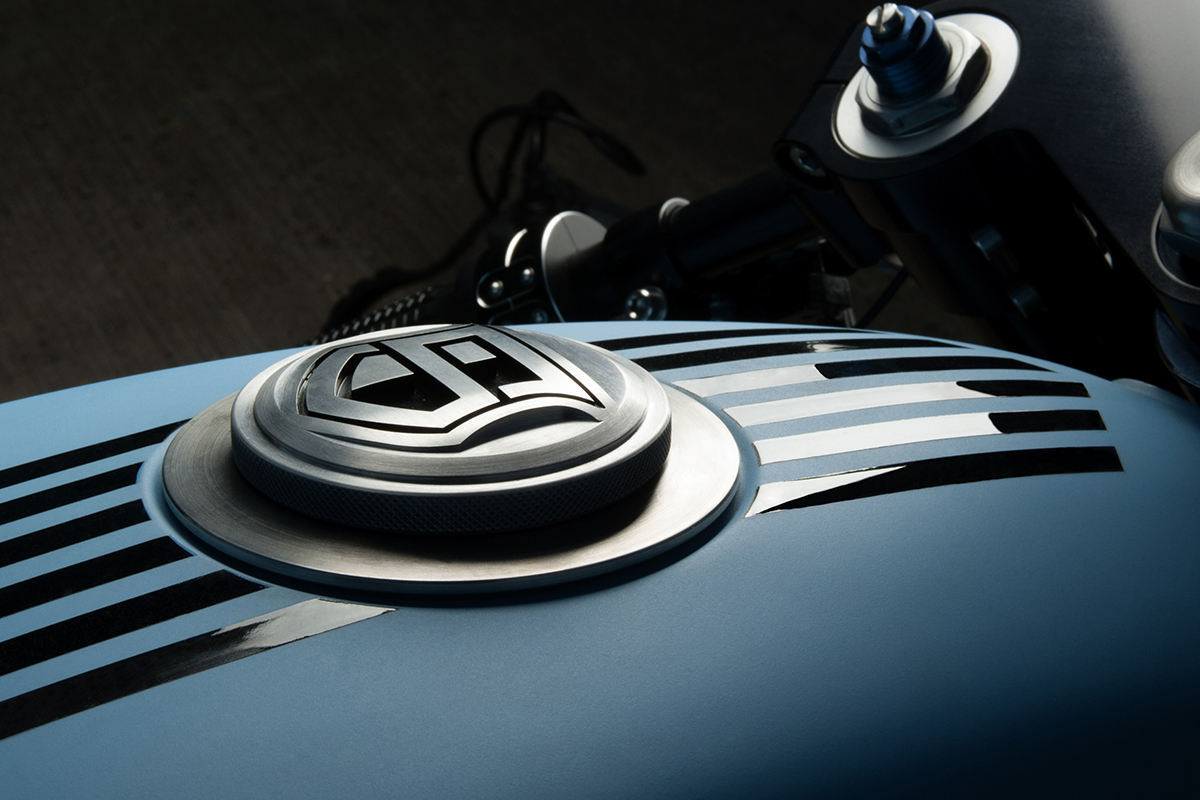 Once they’d settled into their new digs the nut and bolt rebuild of the R100 R began. During this process the bikes engine was paid special attention. All of its seals, inlet/outlet valves, piston rings, gaskets, etc were replaced with new better performing parts. According to Rahul it’s now “basically a zero hour engine”, which has helped to get back some of the power the BMW lost with age. To get the engines exterior looking as fresh as its interior the cases were all then aqua blasted before being treated to a fresh coat of black engine paint, leaving a selection of fins and BMW emblems bare for silver highlights. 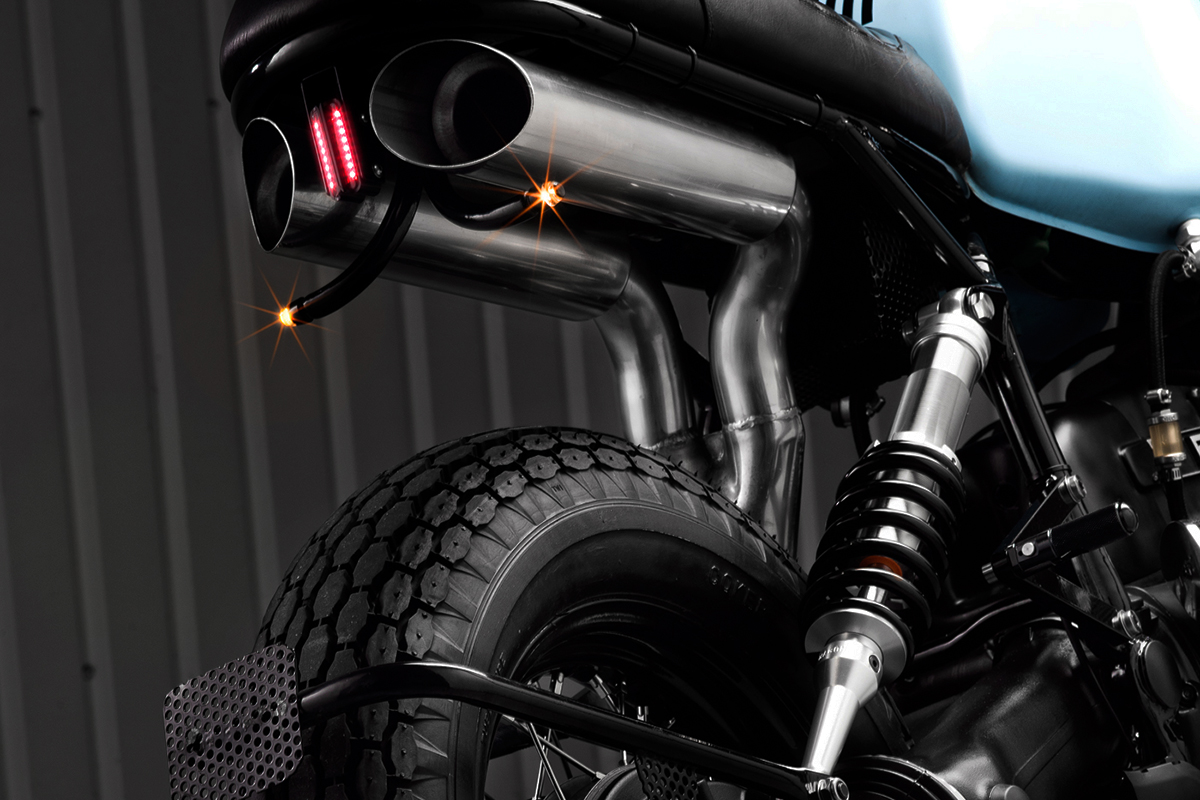 It was around about this time that Rahul purchased a set of secondhand Yamaha R1 forks with the intention of using them on a future personal project. However, when he returned to the workshop with them in hand and saw the R3 sitting on the stand he recalled one of James’ requests. “Mean was the word James used in his first sentence to me about how he wanted the bike to look. I saw it on the bench and thought it was still missing something to get that ‘mean’ look. I realised straight away that this front end has to go on that bike. I did a quick mock up, took a picture, sent it to James and he couldn’t agree more.”

Although the adaption of the Yamaha forks was going to incur additional costs James knew he had to have them, so he committed some more funds and the process was underway. Danny at Fastec Custom Racing was commissioned to perform the bespoke machining. After discussing some design ideas the new yokes were milled. Finished in black to match their paint scheme Rahul also had the Sinjora Motorcycles logo laser etched into the front of the top clamp and had a recess added to accommodate the Motogadget speedo and warning lights. Before everything went together the forks themselves were also given an internal freshen up and were anodised in black. To complete the handling package Rahul then mounted a custom made Hagon shock, designed specially to match James’ proportions. With a pair of wavy EBC performance brakes held in place using custom mounting gear the bike also stop better than any R100 R that ever rolled out of BMWs’ factory.

When it came time to discuss the exhaust system both parties agree a set of standard headers simply wouldn’t do. Wanting to continue that “mean”, sportier look, Rahul designed a system that would that would run under the belly of the bike and exit beneath the tail, similar to many modern sportsbikes. Constructed from brushed stainless steel by Zorstec, the pipes flow along the same lines as the bike’s frame and by all accounts “sound the business”.

The frame itself underwent a cleanup and detab prior to a fresh powdercoat. The revised subframe was constructed using matching diameter pipe and the seat that mounts to it was finished by local upholsterer Glenn Moger. With the larger parts of the job done it was on to the details starting with a custom machined alloy fuel cap bearing the Sinroja emblem. The hubs were painted and fins polished to match the engine details and a set of removable passenger pegs machined so the option to take a pillion remains. On the clip on bars are Suzuki Hayabusa controls and wrapped around the rear wheel is a hugger style plate holder. When it came to painting the tank the guys stuck to their initial idea of flat powder blue, but to help break up the colour shiny metallic black pinstripes were added. 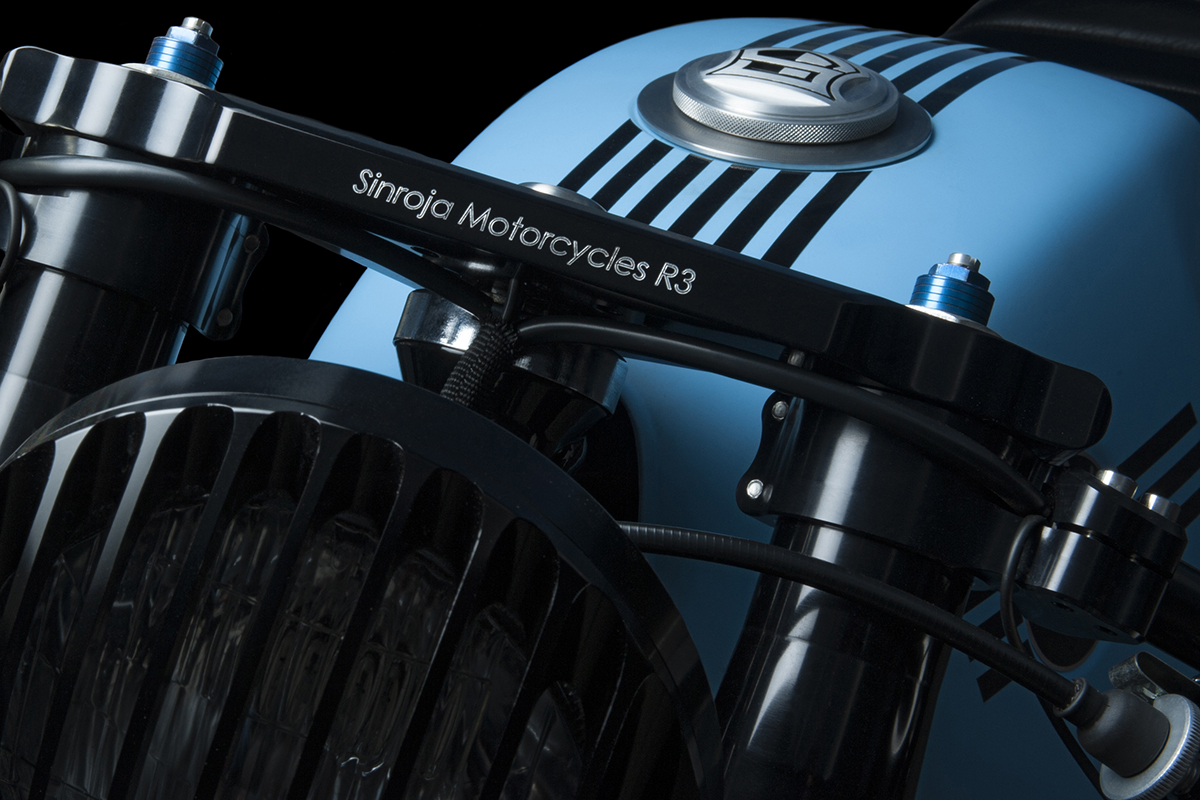 For the electrics, the bike runs a complete custom Towza Tronic loom that relays all the signals through a Motogadget ignition unit. Up front, a Bates style headlight wearing a vertical grill lights up the road ahead while in the rear, LED lights slung between and either side of the mufflers let everyone behind the bike know its next move.

According to Rahul “This bike has really helped us learn a lot and also helped us see outside the box, which is essential in this business. Everyone loved the bike at this year’s Bike Shed show, including James whom we promised ‘The ride of a lifetime, every time‘. James has ridden the R3 so much since taking delivery of it in March that it’s already time for its first service, which comes as a part of what we offer with every bike we build.”

The future is now looking bright for the Sinroja brothers. After only a few short months they’ve already outgrown their first workshop and have received orders that will take them up to their R7 build. Some of these projects will see them tackling other platforms such as Honda fours and we’re definitely excited to see how they all turn out. 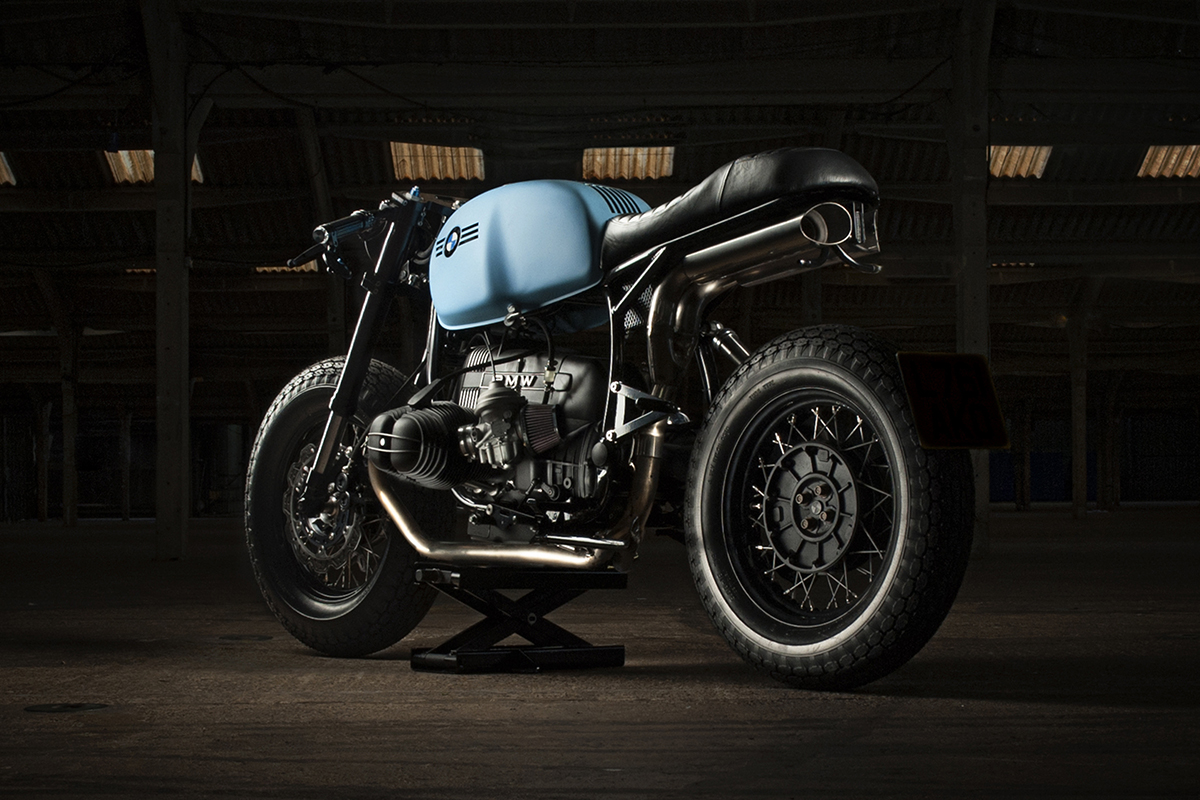