Nostalgia can be a powerful motivator. For Joe Loss of Fremantle, Western Australia it started in his teenage years when his brother brought home a 1972 BMW R60/5. Since that day Joe has been unable to shake the allure of the venerable airhead boxer. Now with multiple custom builds under his belt, Joe found himself in the right place at the right time to start another when a 1981 R100RT found its way into his garage. Despite only showing 55,000kms since new it was in poor shape. The RT had been stored outside under a tarp for quite some time. This meant a complete strip-down was required to get the bike ready for registration. Once the bike was legally back on the road and running smoothly the real work on this slick BMW R100RT cafe racer build began. 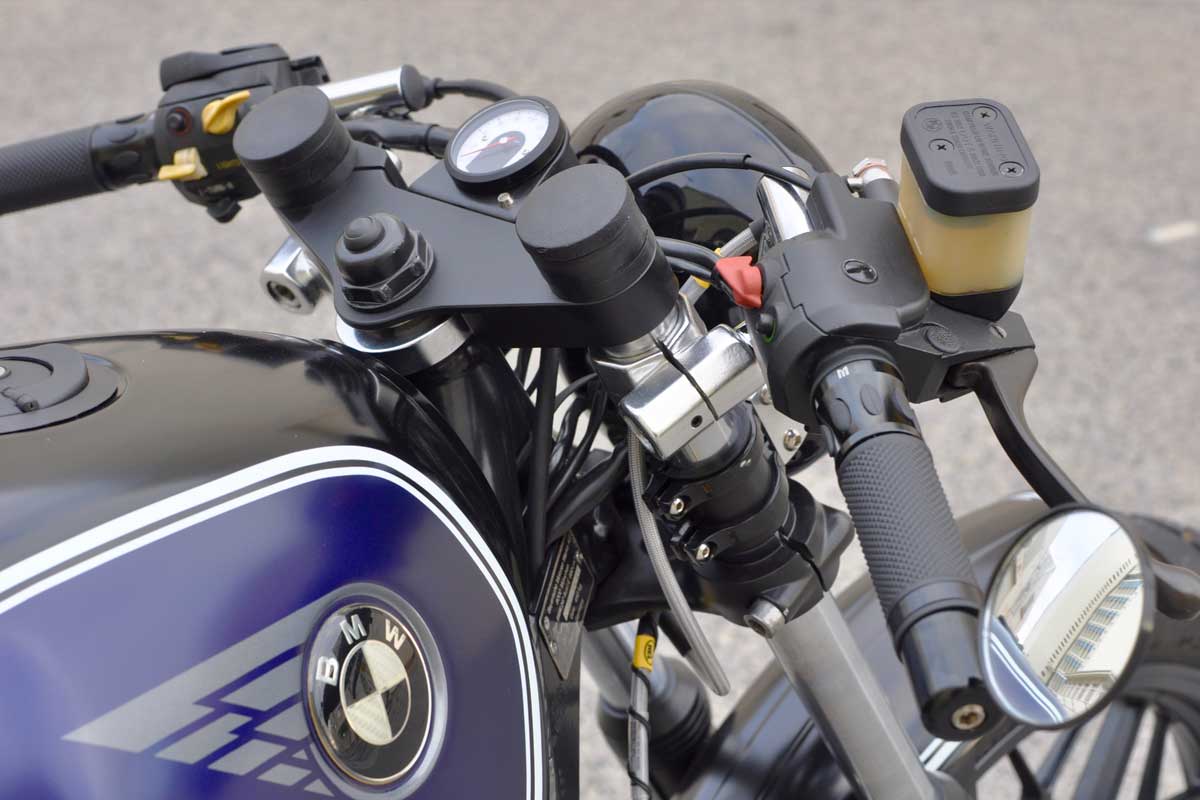 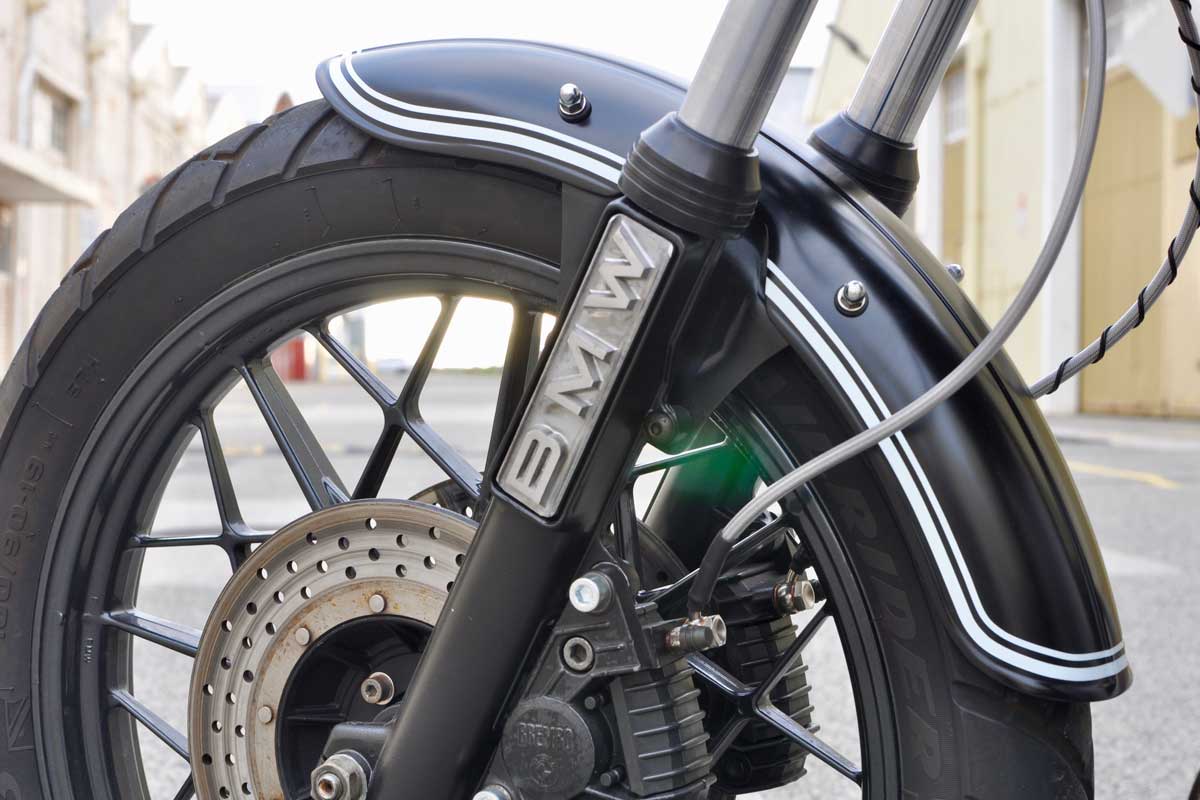 The fairings and most of the R100RT bulk were dispensed with during the refurb. This made stripping the bike down further easy. A feature I really like about BMW airheads is the factory bolt-on subframe. Aesthetically they’re challenged but you can’t argue with the ease of maintenance and customization they offer. Joe took full advantage of this, designing and building his own tubular steel subframe from scratch. “I wanted to have the shocks inclined over and connected directly to the main body of the frame rather than to the subframe,” Joe says. “This required modifying the frame and fitting extra-long Hagon shocks.” 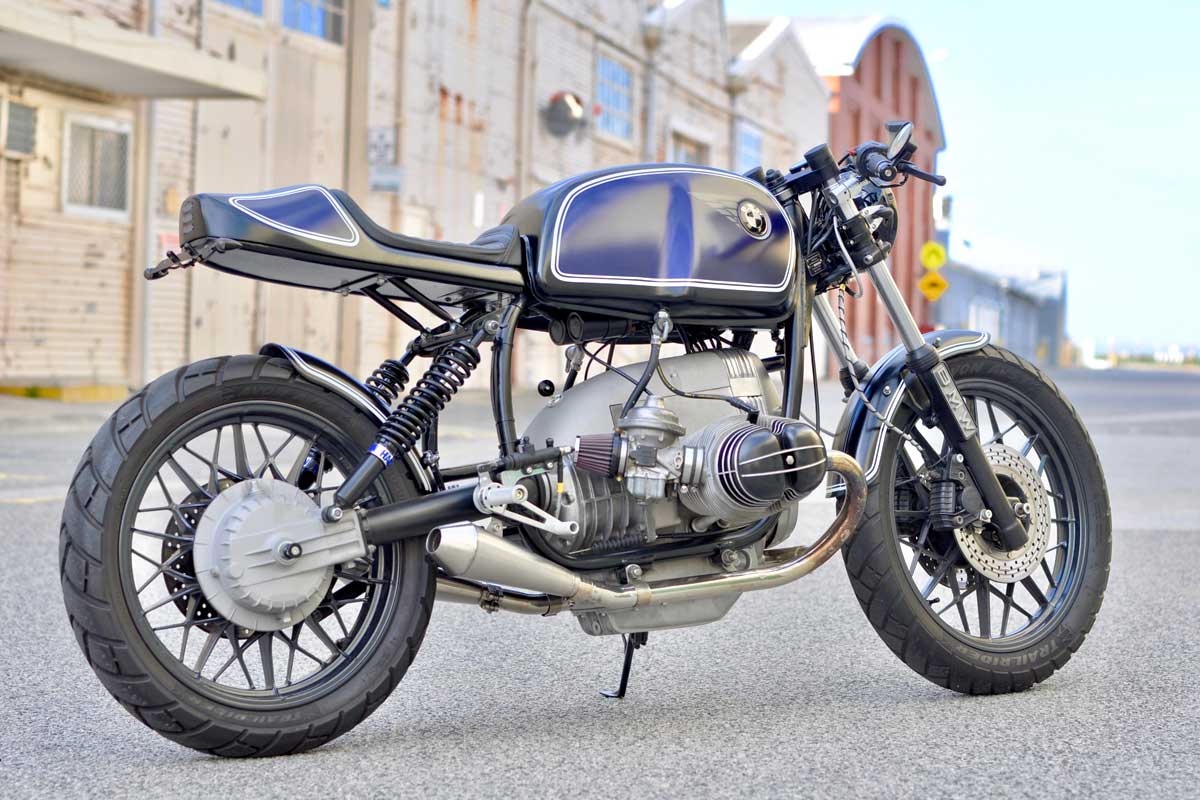 The custom seat unit has a bit of an interesting story so we’ll leave Joe to expand on that: “The seat shape was inspired by, of all things, the handle of a teaspoon. It was hand made out of fiberglass and has 3 rows of LEDs in the back functioning as the tail/brake lights. The seat pan is glass and carbon fiber. The upholstery by Andrew from Beyond Trim is Brahman leather with silver and blue stitching.”

And what a seat unit it is. Perfectly proportioned and one hell of an upgrade in the looks department compared to the Bavarian’s best efforts. The next aesthetic upgrade was how Joe got rid of the chunky airbox. An aftermarket top cover for the engine was sourced and K&N pod filters adorn each of the Bing carburetors. The ignition switch was then relocated into the new engine top cover, the first of many discrete features on this bike. 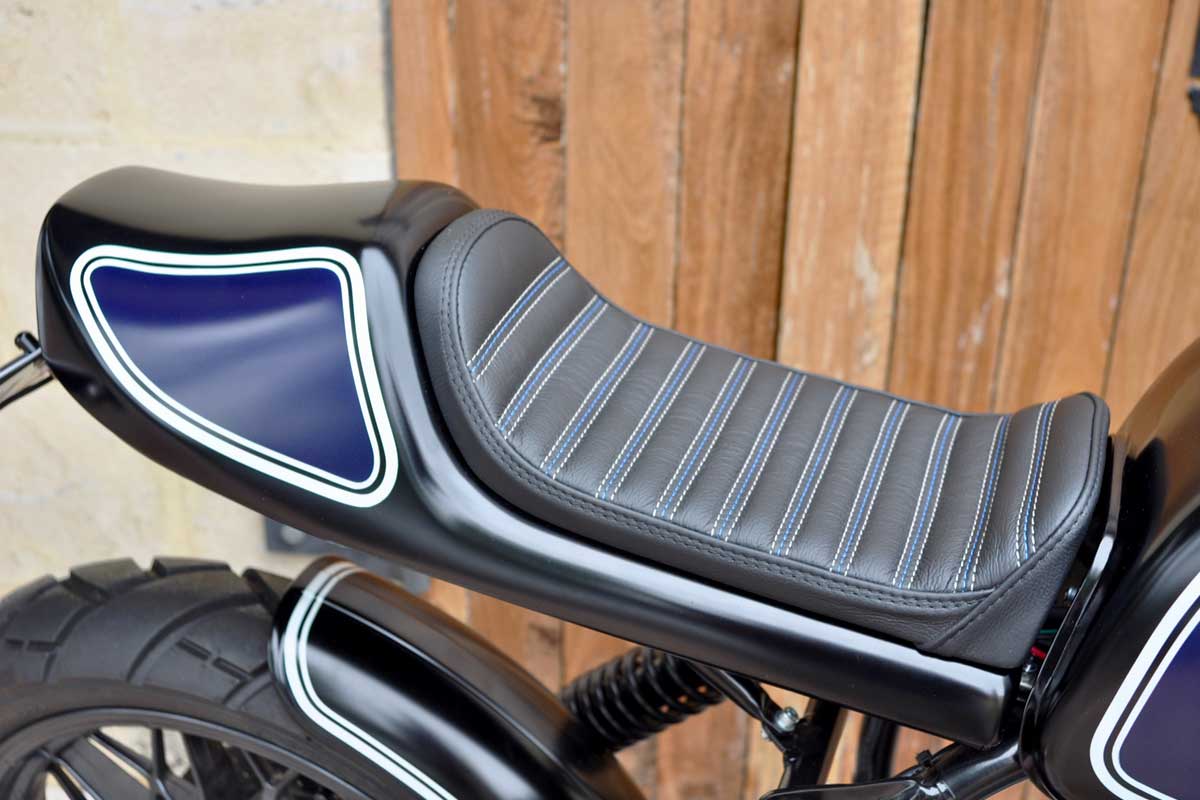 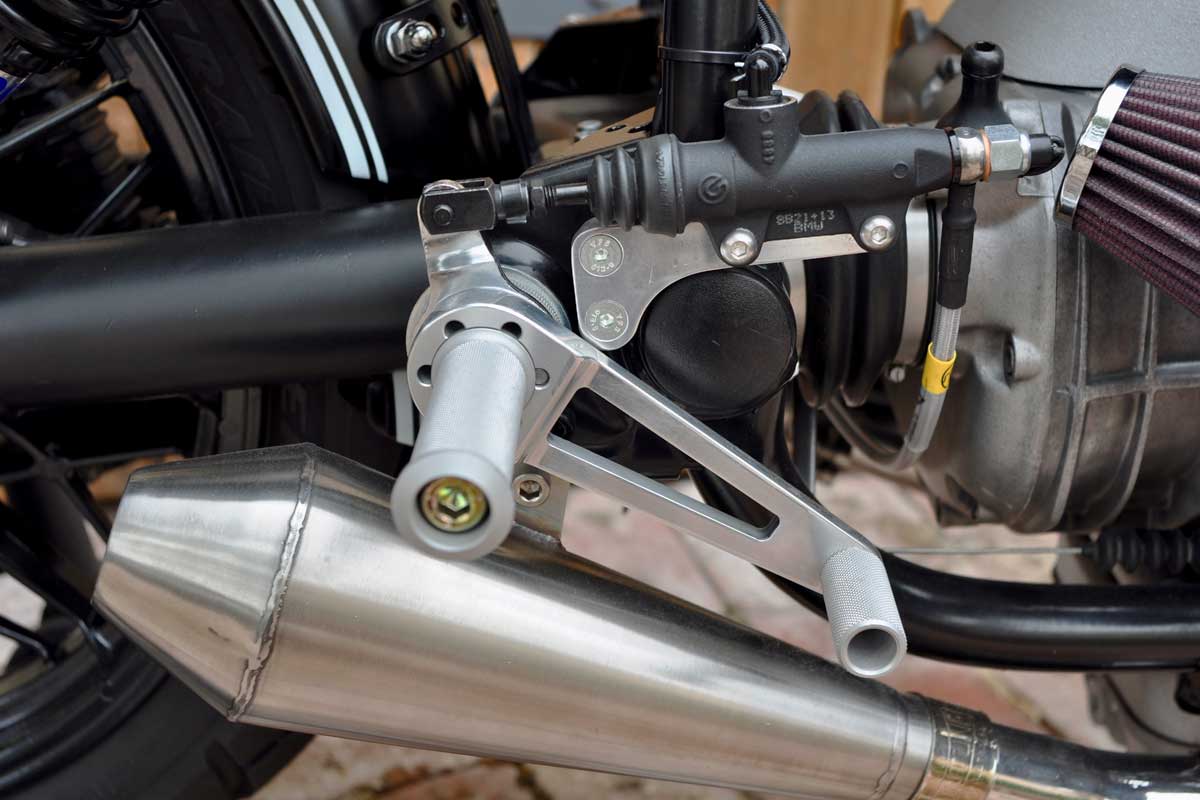 A front end overhauled overhaul came next with new suspension, a short aftermarket mudguard, and stainless braided brake lines. The original front guard was chopped and repurposed as the rear wheel hugger; a smart way to keep that fresh engine from getting covered in dirt. BMWs of this era had a flimsy top clamp that doesn’t exactly inspire confidence so Joe replaced it with a solid alloy unit from ACC Billet Engineering.

The clip ons are Tommaselli and a Motogadget Tiny speedometer keeps the dash looking svelte. Joe has also cleverly drilled the control button for the speedo into the steering head nut. Just like the cockpit, the remaining electrics on the bike were stripped down and simplified. Everything is tucked neatly away under the seat, including a tiny Antigravity lithium battery. 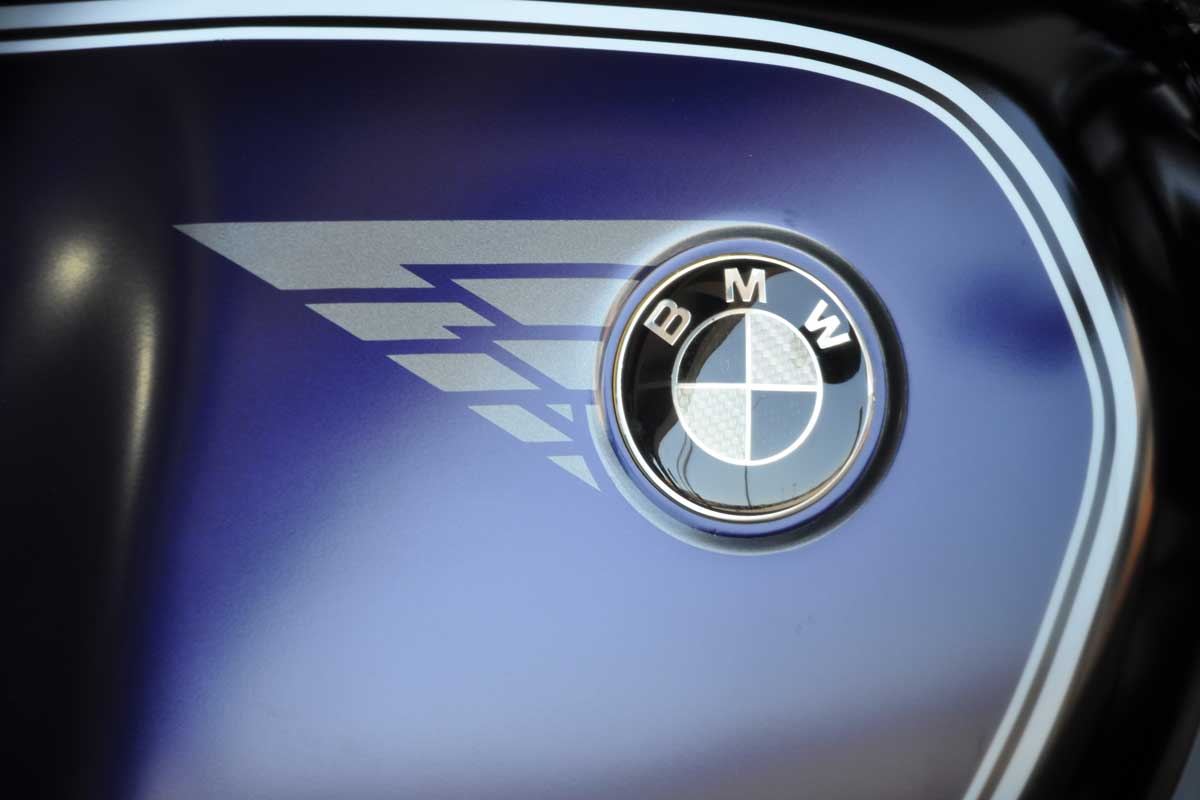 Early style round rocker covers replaced the angular R100RT items and Tarozzi rear sets were installed to complete the trademark cafe racer riding position. The rear brakes got the same treatment as the front with a Brembo master cylinder and a stainless braided line. Sitting just below the new rearsets are some stainless steel header pipes. These are aftermarket units that Joe cut and re-welded to get a more aggressive upsweep. The headers were then capped with purposeful 12-inch reverse cone mufflers from Cone Engineering.

With all the fabrication work complete, the bike was stripped down once again and the frame liberated of all superfluous tabs and brackets. It was refinished in a satin black powder coat. The BMW snowflake wheels remain, treated to black powder coat and modern Avon Trailrider tires. Like Donald Trump, the engine and final drive received a media blasting. They were left unpainted, a nice highlight that contrasts against the dark color scheme. Speaking of colors, the amazing work by Mike at Diablo Moto Custom Paint really is something else. Joe is especially pleased with how it came out. 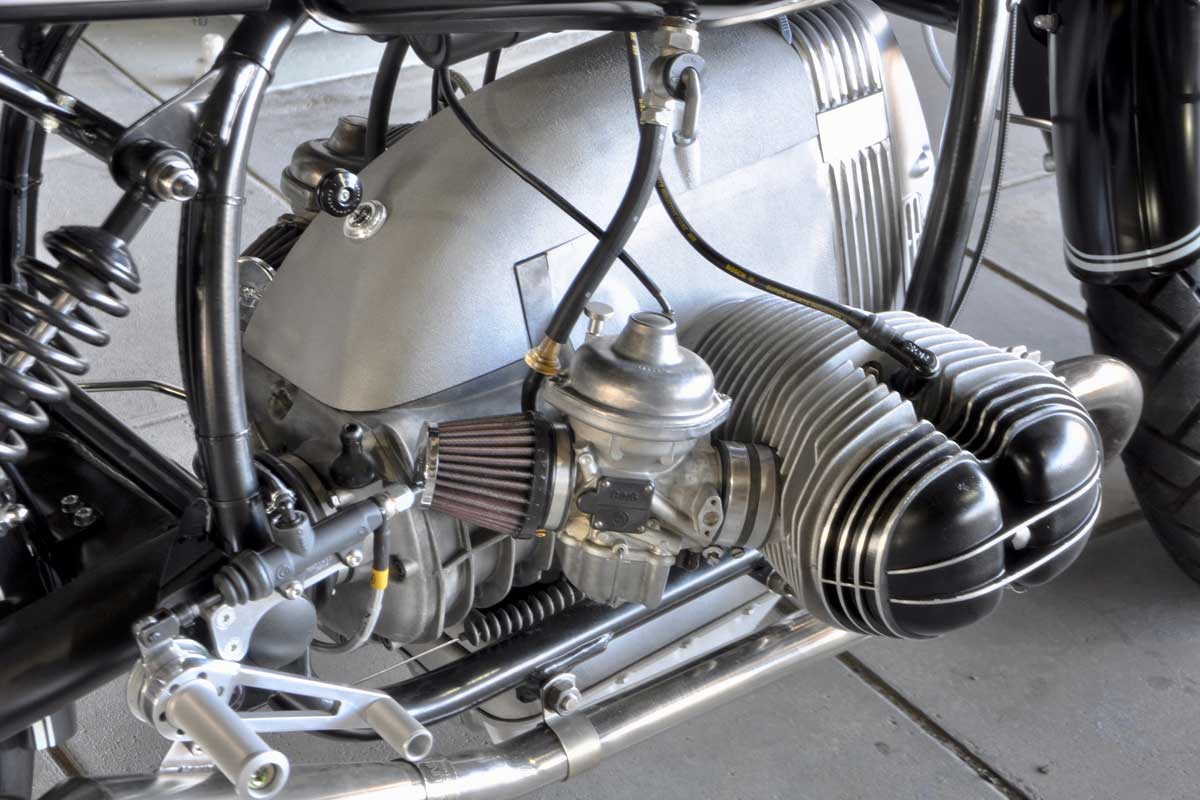 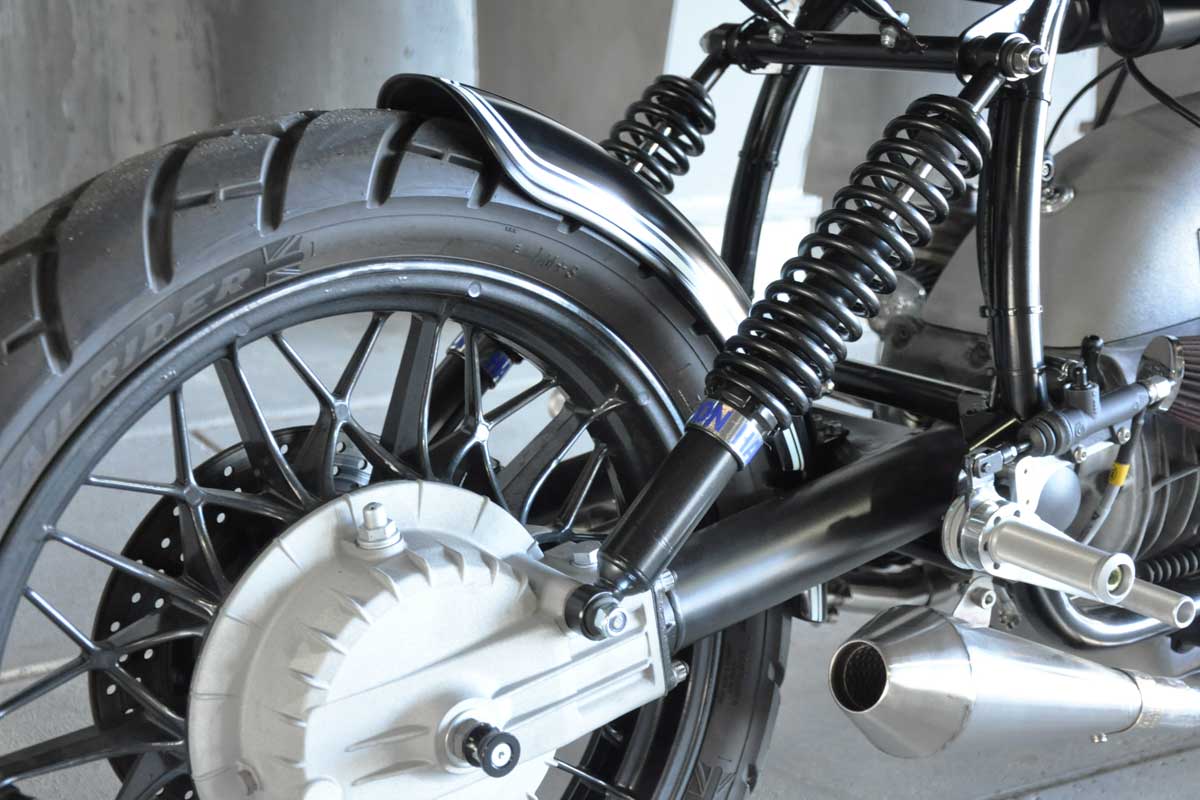 “I wanted the paint to pay homage to classic BMW paint schemes but also be unique. So I decided to go with black and double cream pinstripes but using a satin finish with a dark blue infill. At acute angles and in shadows the blue looks black. In daylight it shifts between blue and slightly purple,” explains Joe. “I also designed the dark silver wing motif to go with the BMW roundel. This was inspired by an art deco set of wings I had seen. This is the second paint job I have had done by Mike at Diablo Moto Custom Paint and this one is even better than the first.”

From the ignition switch and key to the way Joe has repurposed the old BMW engine emblems on the front forks, the list of things I like about Joe’s BMW R100RT cafe racer is a mile long. This may well be his best work to date. Luckily for us, history proves that Joe will undoubtedly be back again with another addition to his already impressive collection. We are eagerly awaiting. 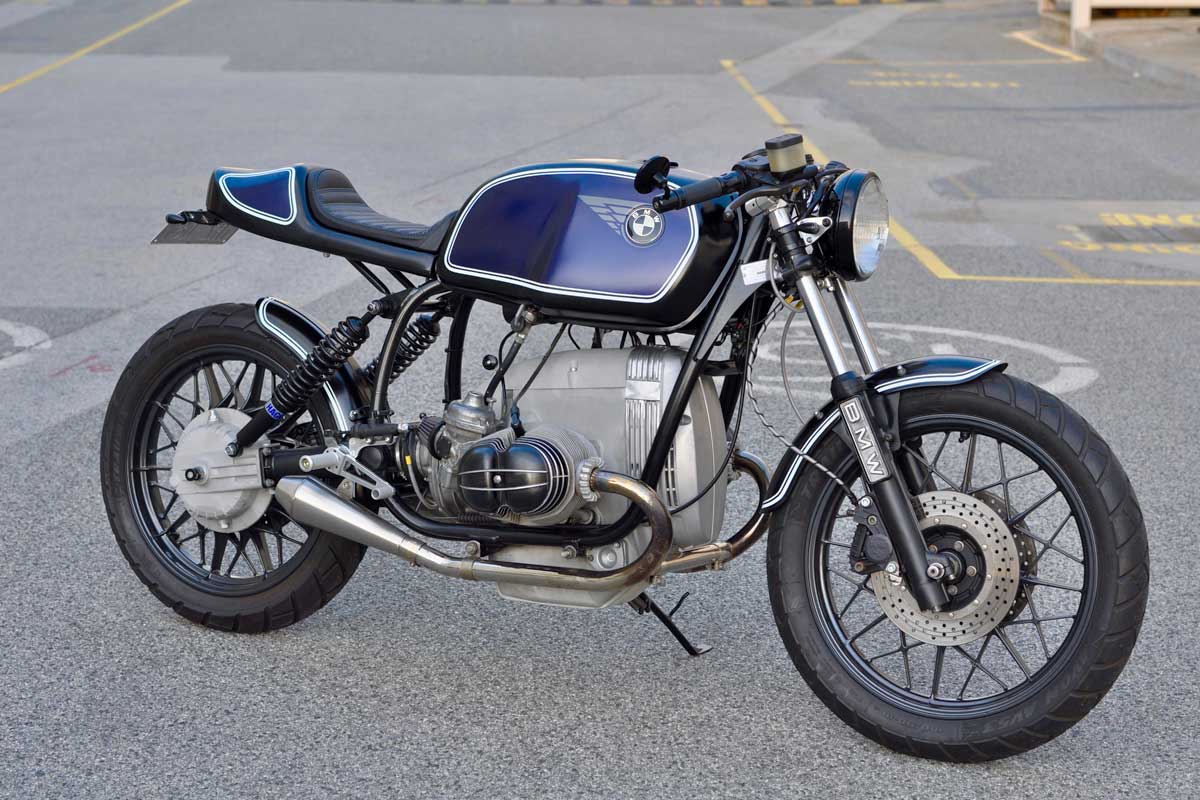