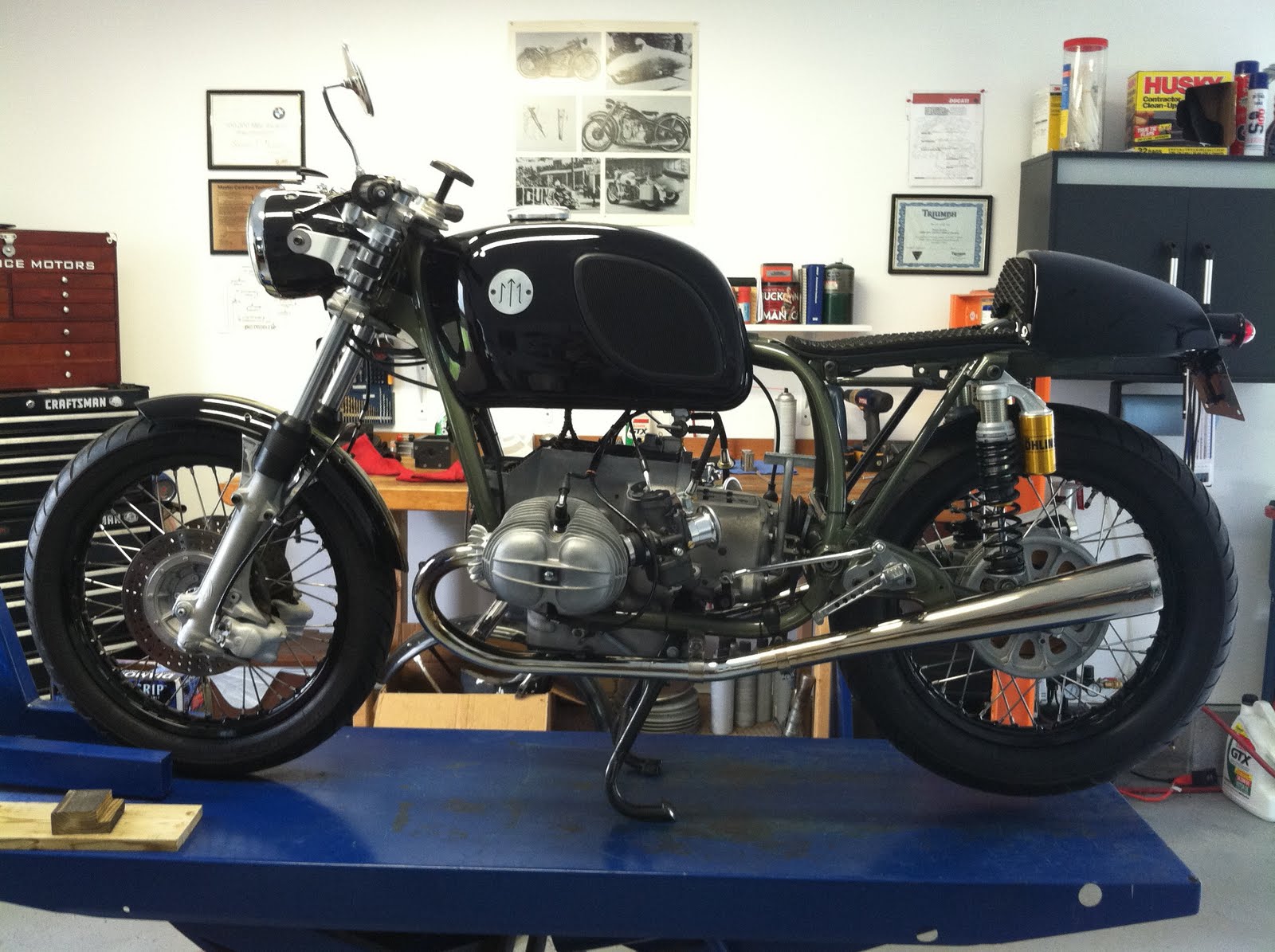 The quality of the home built Cafe Racers being submitted by our readers continues to astound us. This exceptional bike sent in by Shawn is based on a 1971 BMW R75/5 short wheel base that took around 10 months to complete. Here’s the story behind the build…

“I wanted to build a Cafe Racer style bike that only had what it needed to go and stop.”

“I wanted to keep some of the basics of the bike, but I also wanted to make some improvements.

Originally it had a 750cc motor. I installed BMW 900 cc pistons and cylinders to increase overall displacement. With the smaller 750 heads, compression is slightly increased. I also installed the BMW 336 cam (sport cam available for this vintage BMW) that has both increased lift and duration. The flywheel has been lightened and balanced by Cycle Works.”

“This bike is kick start only for a couple reasons. 1) Electric start is for pussies 2) If I could lose the starter, then I could also lose the weight of the big battery and associated heavy wiring.”

“I milled away portions of the front cover and timing cover. The diod board (rectifier) was moved to the position that the electric starter normally occupies and the current smaller battery is in the tail section.

The bike originally had a front drum brake and I wanted to improve the stopping performance. I installed the front end from a mid-late 70’s BMW that had a dual disc setup, ditched the normal master cylinder and installed a Brembo master cylinder with Speigler SS brake lines.” 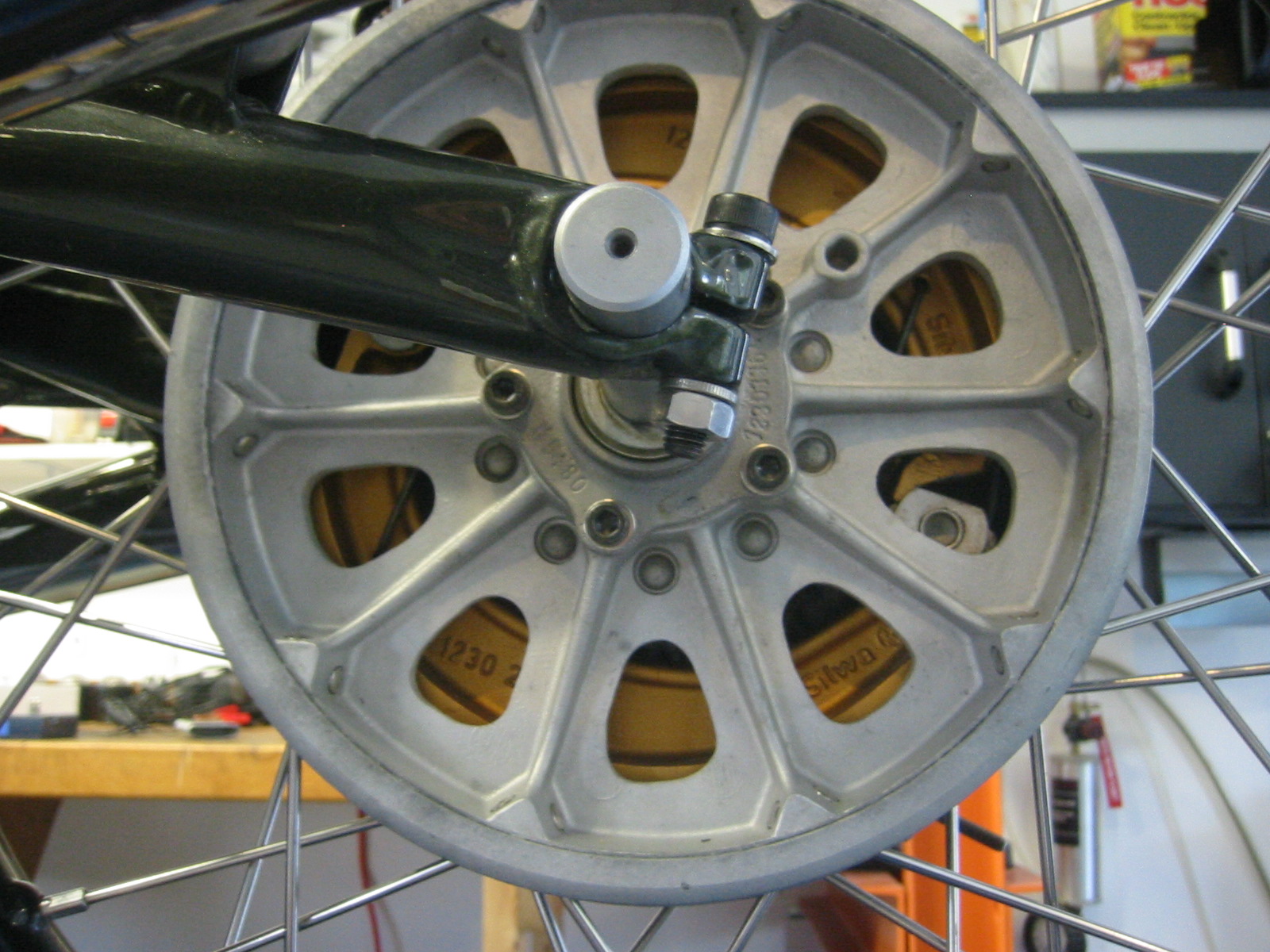 “The powder coated rims are original and new stainless spokes have been fitted.

To stiffen up the front end, I took a normal bottom triple clamp and used it in place of the original top triple clamp. By doing this I could accomplish two things. 1) I could now move the forks up into the triple clamps further to quicken the steering and 2) now both the bottom and top triple clamps would actually clamp the forks-adding extra stiffness. The internals of the forks also have BMW heavy duty springs with heavier than normal fork oil. The front end is now tranformed from a soft and floppy feeling front end to one that actually provides a decent amount of feedback while performing like a reasonably set up sport bike.” 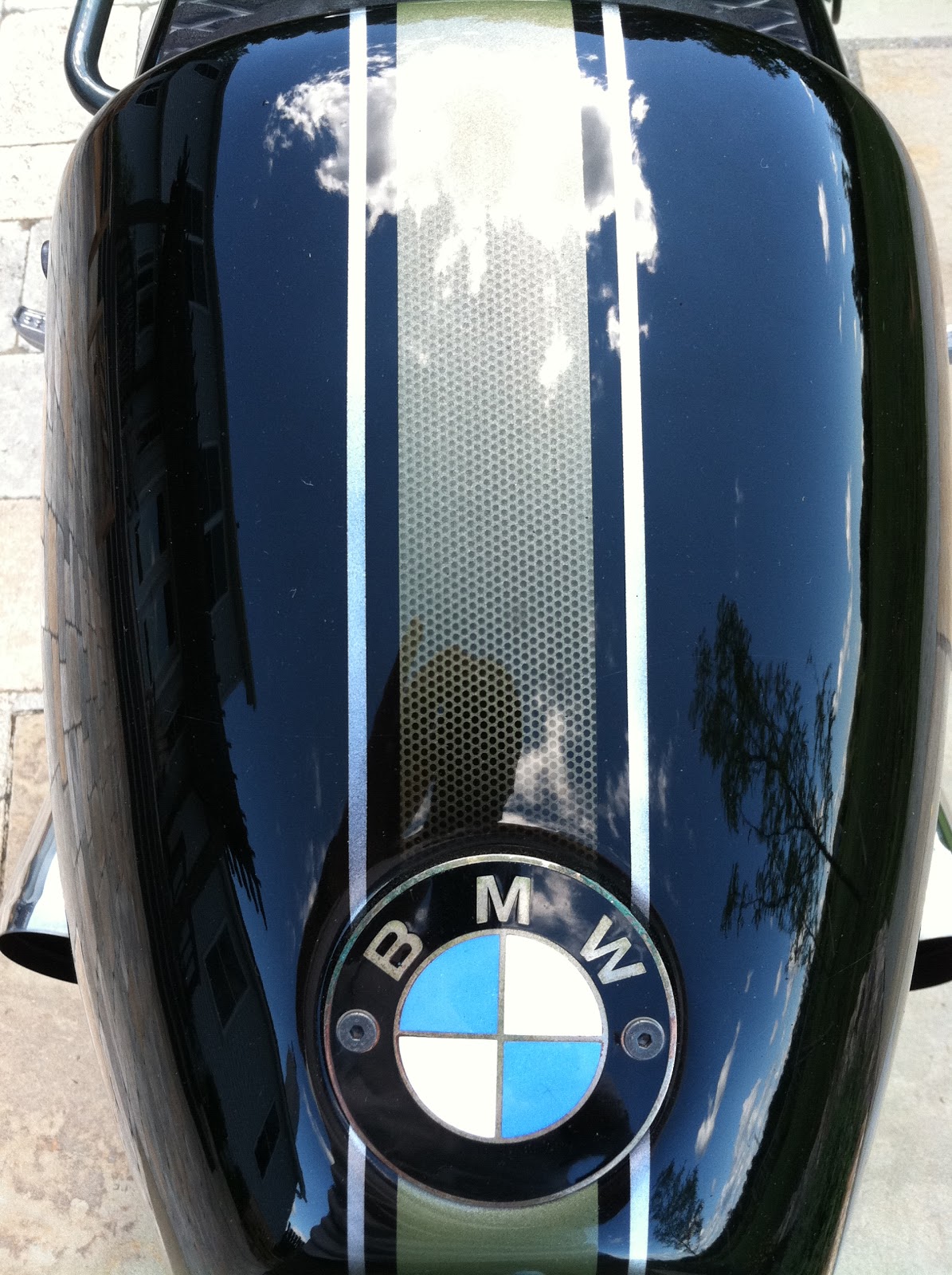 “The final drive gearing has been shortened to a 4.25 ratio, the shortest I could find. Yes, the bike may now only have a top speed at redline of about 80 mph, but it gets there fast. I don’t ride the bike on the track. It’s for the street and 80 mph is fast enough for most circumstances. I wanted acceleration. The speedo has been calibrated to match the final drive gearing.”

“I milled out the rear wheel hub for both looks and to lose some unneeded weight and fitted Ohlins rear suspension. “I wanted something obnoxious, and it is”

“Carbs are now 36mm Dellortos with velocity stacks (changed from the stock 36mm CV Bings). The headers are stock BMW, but the mufflers are open megaphones. The bike is very loud, I wanted something obnoxious, and it is.

The seat pad is cut from stock I got from HT Moto. The fuel tank is stock but the emblems on the fuel tank are my own design and signify McLean Motorcycles.
The ignition is Boyer Bransden with dual plugged heads.

The taillight is something I had laying around waiting for the right project, it’s from a Knucklehead era Harley Davidson. I did not perform the work on the dual plugging of the heads or lightening of the flywheel but all other mechanical work I can honestly say I did myself.” 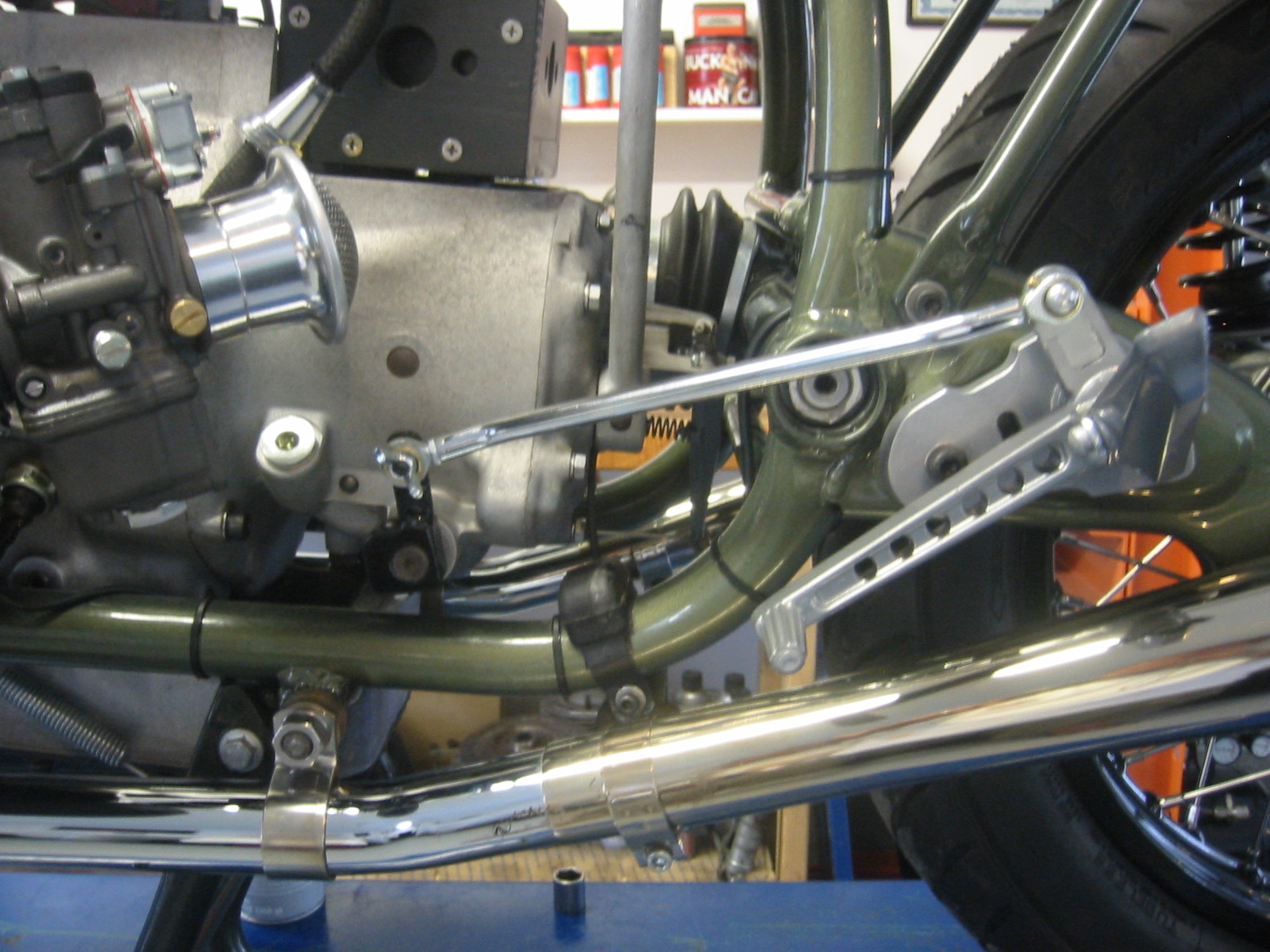 “The frame and wheel rims are powder coated by Extreme Powder Coating in Newburgh, NY-Tom is great. The fuel tank, front fender and seat / tail section were painted by Fleming Tegada. Fleming lives in Queens, NY and works for Moto Insanity. Fleming is amazing and I can trust him to do what he feels best.

I’m sure there are faster BMW “airheads” out there, but I can honestly say, this is the fastest and best handling one I’ve ever ridden.” 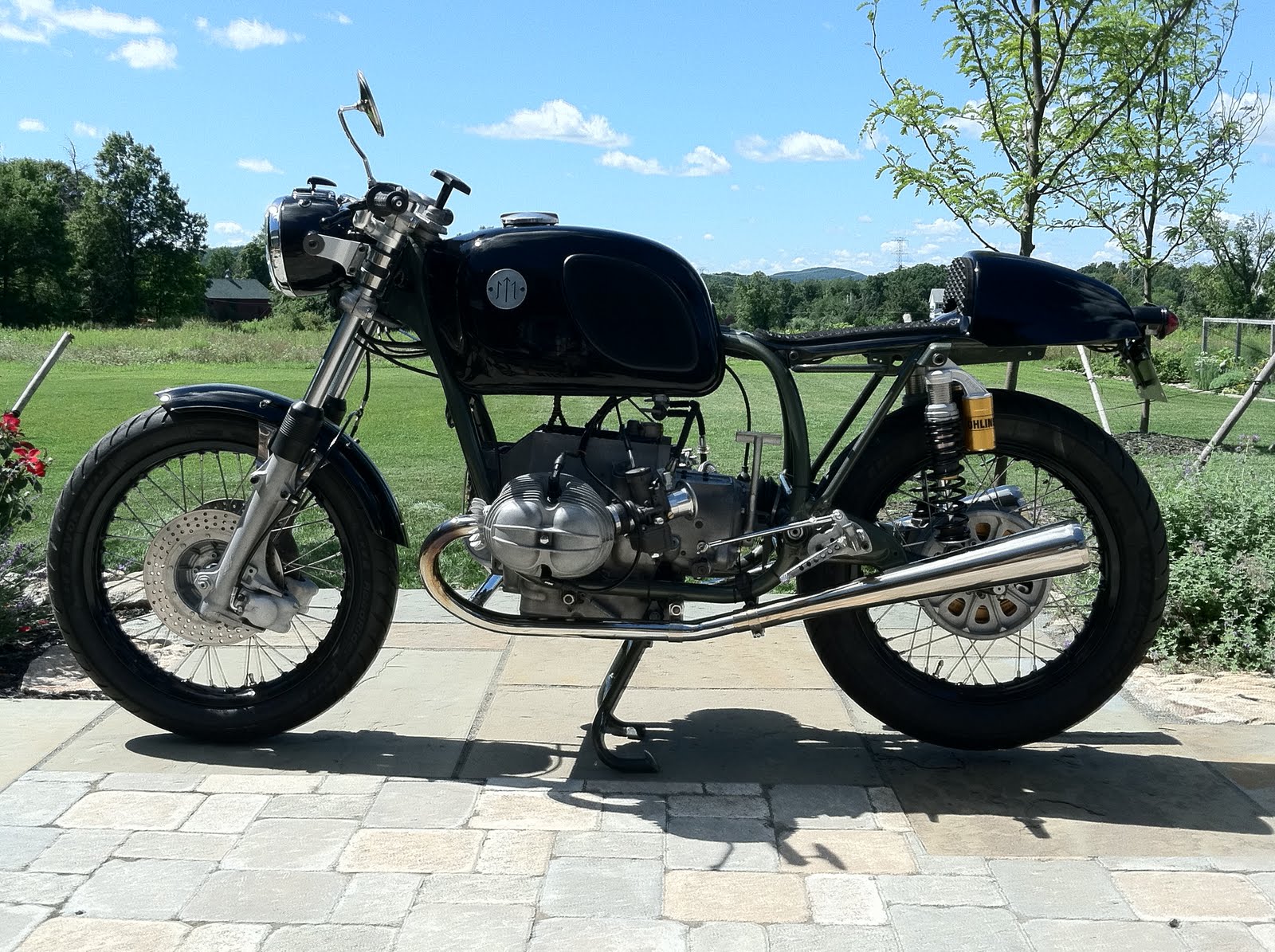 Big thanks to Shawn for sharing his BMW Cafe Racer with us. I’m everyone appreciates the planning and hard work that went in to piecing this awesome machine together. If you’re in NY keep an eye out for him…you’re sure to hear him coming!

If you’ve got a Cafe Racer you’d like to see posted here complete the form on our “Submit a Cafe racer” page.