Suicide Club: Cafe Racers and Motorcycles in the Media

Fake news is a term that’s taken on new meaning in the last few years. But you’d be mistaken to think that the idea itself was of a similar age. Ever since the news became entertainment off the back of crime, celebrity gossip and human tragedy in the early 20th Century, photographers and writers have realised that it’s far more interesting – and easier – to make the news for themselves than to search it out.

From moviestar gossip and tidbits from ‘sources close to the royal family’ to far more common pieces on regular people that were written dripping with shock and outrage, tabloid journos dispensed with uncovering the truth over 100 years ago and just cut straight to the chase. So when they turned their keen eyes to motorcycles, you can bet all kinds of fun and games followed.

Motorcycling’s first big tabloid feature was the now legendary Hollister ‘Riots’ that took place in the California town on that July 4th summer weekend in 1947. If you believe what was written in the San Francisco Chronicle and LIFE magazine a few weeks later, you’d be entirely certain that those bikers present were eating babies and single-handedly bringing about the demise of the entire United States of America.

There’s no doubt that it was one hell of a party, but less tabloid reporting subsequently detailed that it was little more than a few dozen drunk and disorderly arrests, some street racing and a whole bunch of empty beer bottles. The fact that many of those present had also saved the country from the dual existential threats of Nazi Germany and Imperial Japan a few short years earlier wasn’t deemed to be relevant. And while I won’t delve too deeply into the irony of outlaw motorcycle gangs using this very same tabloid myth to fuel their own rebellious needs, this balmy California night was ground zero for a biker versus tabloid battle that continues to this day.

Just over a decade later, and it was the turn of England’s bikers to cop the brunt of the grubby tabloid press. And as we all know by now, no one does tabloid beat-ups quite as well as London’s Fleet Street. The fact that North London’s burgeoning cafe racer scene – all happening a mere handful of miles to the north of the daily newspapers’ headquarters – avoided their steely gaze for almost five years is probably more a testament to the fact that it was mostly working and middle-class white kids doing the racing than anything else. 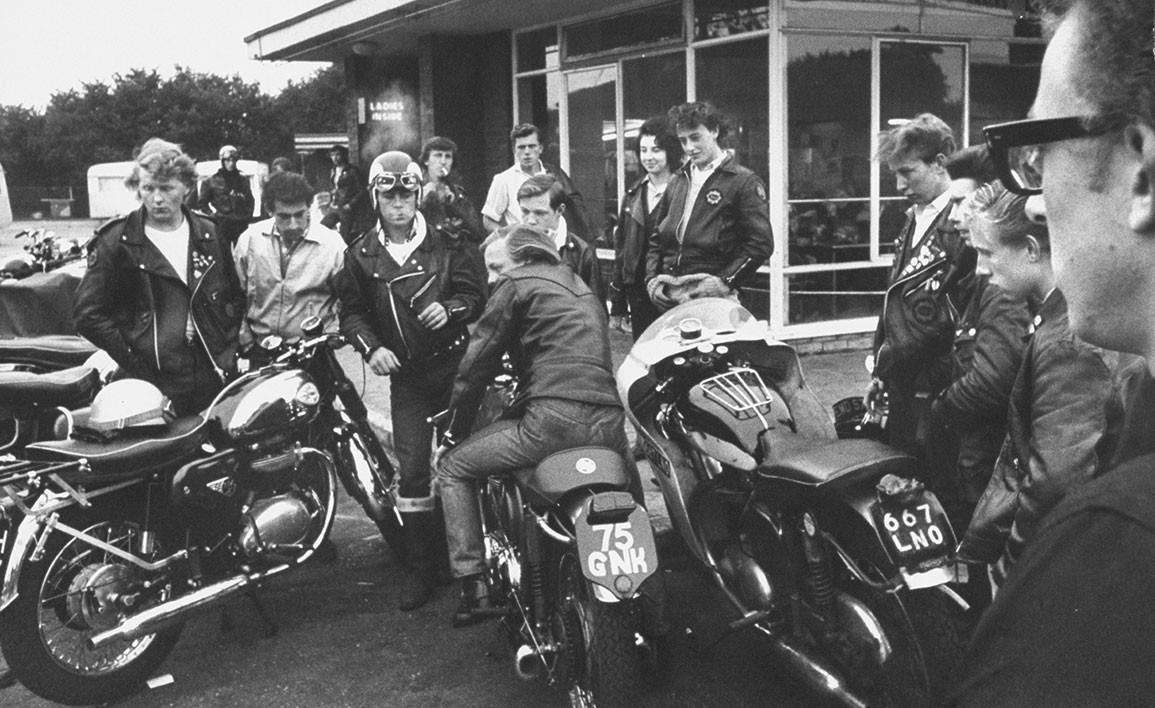 But when they did tweak to the fact that young ‘hoodlums’ were using public roads to race motorcycles and that – horror of horrors – some of them were getting hurt, all hell (and an army of Imperial typewriters) broke loose. Soon the Daily Mirror along with a raft of copycat papers managed to beat the general public into such a frenzy, the police were forced to act and clamp down on any poor sod that dared to ride a motorcycle under the age of 30.

One can only imagine what the poor Reverend Bill Shergold, founder of the ‘59 motorcycle club, was thinking when his attempts to set young bikers on the straight and narrow were shown in a light like this. To see such good work flushed down the toilet overnight should break any true biker’s heart.

Now while the immediate effects of all this fake news and hype was undoubtedly negative, I’m glad to tell you all that there were some positive outcomes. Both in the short and long terms. The Hollister riots not only gave motorcyclists a bad name to this day, but the event became firmly lodged into the pop culture psyche. Directed by Laslo Benedek, 1953’s The Wild One starring Marlon Brando as ‘Johnny Strabler’, the leader of the Black Rebels Motorcycle Club that ‘cause a ruckus using intimidation wherever they go, with their actions bordering on the unlawful.’

Undoubtedly there were little real world connections between the Hollister ‘riots’ and Benedek’s really rather camp film, but as bikers I guess we should be grateful that historical, archival motorcycle movies like this were even made in the first place. The film’s success also had an interesting knock-on effect for motorcycle films in general. The public’s taste for all that leather and petrol sooned crossed the ditch and British film makers began turning their hand to stories of bikers.

Director Sidney J. Furie was behind the 1964 movie, ‘The Leather Boys’. Now while that title might raise a few eyebrows in modern times, back then it was a direct reference to the leather jackets these rebellious new cafe racers were getting around in. A world away from the Brando film and full of real life warts-and-all England, the motorcycles here form more of a backdrop for a love story that still feels relevant and even a little surprising in 2021.

By the 1970s, the ‘rebels and petrol’ genre had evolved into an artform that had long forgotten its tabloid roots and morphed into more cutting critiques on society, consumerism, the environment and even the cold war.

I wear my heart on my Aussie sleeve when I saw that the first Mad Max film is one of the all-time greatest biker films ever made. Yes, there are wall-to-wall V8s in there as well, but if you’ve never seen the ‘bridge scene’ stunt where a rider gets hit in the head by and tumbling Kawasaki, you’ve really never lived. Ever.

And if you can’t see how there’s a big, black, rubber and fuel-soaked line between the Hollister riots and the suicide club all the way to Mad Max and beyond, then you’re probably just not looking hard enough.

WHO’S YOUR DADDY? How the Yamaha SR Changed The World