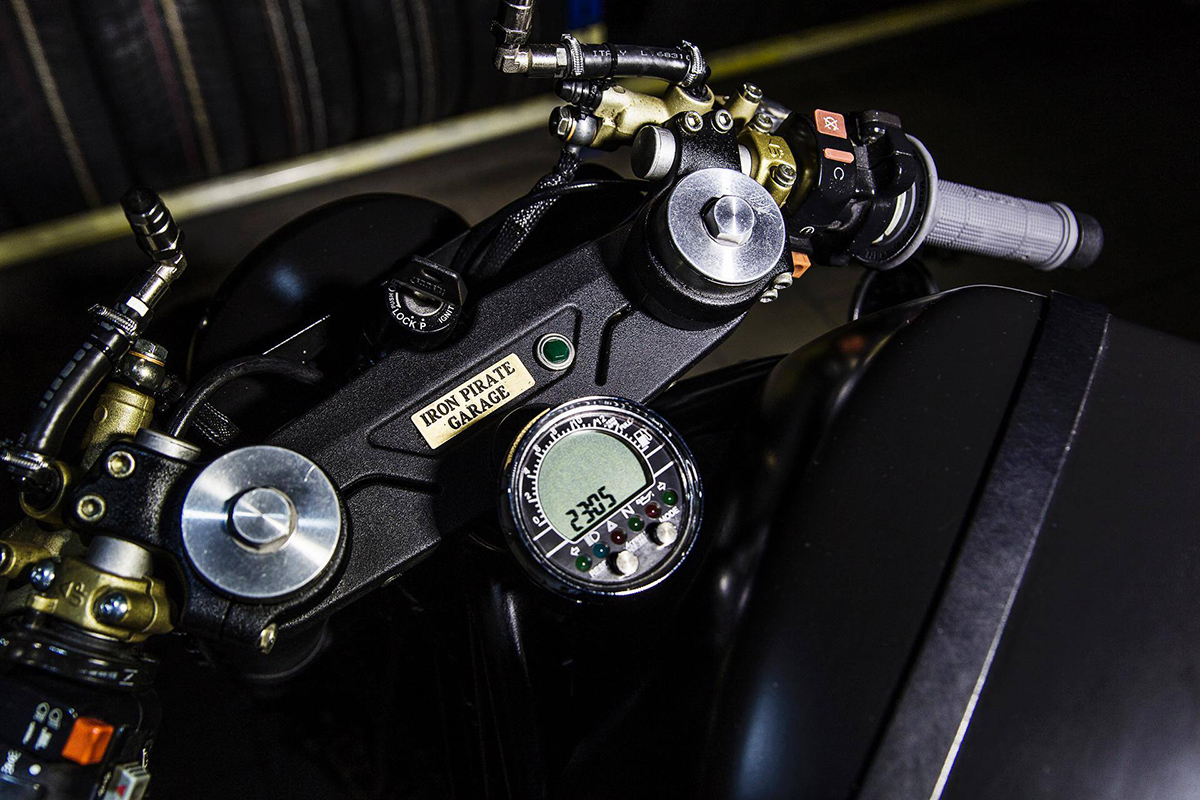 A quick glance over the build portfolio of Iron Pirate Garage will reveal that they’re not afraid to make a statement. Their build style tends to be a mix of street fighter and cafe racer styling and are almost always based on performance focused motorcycles. The Kraken is no exception. 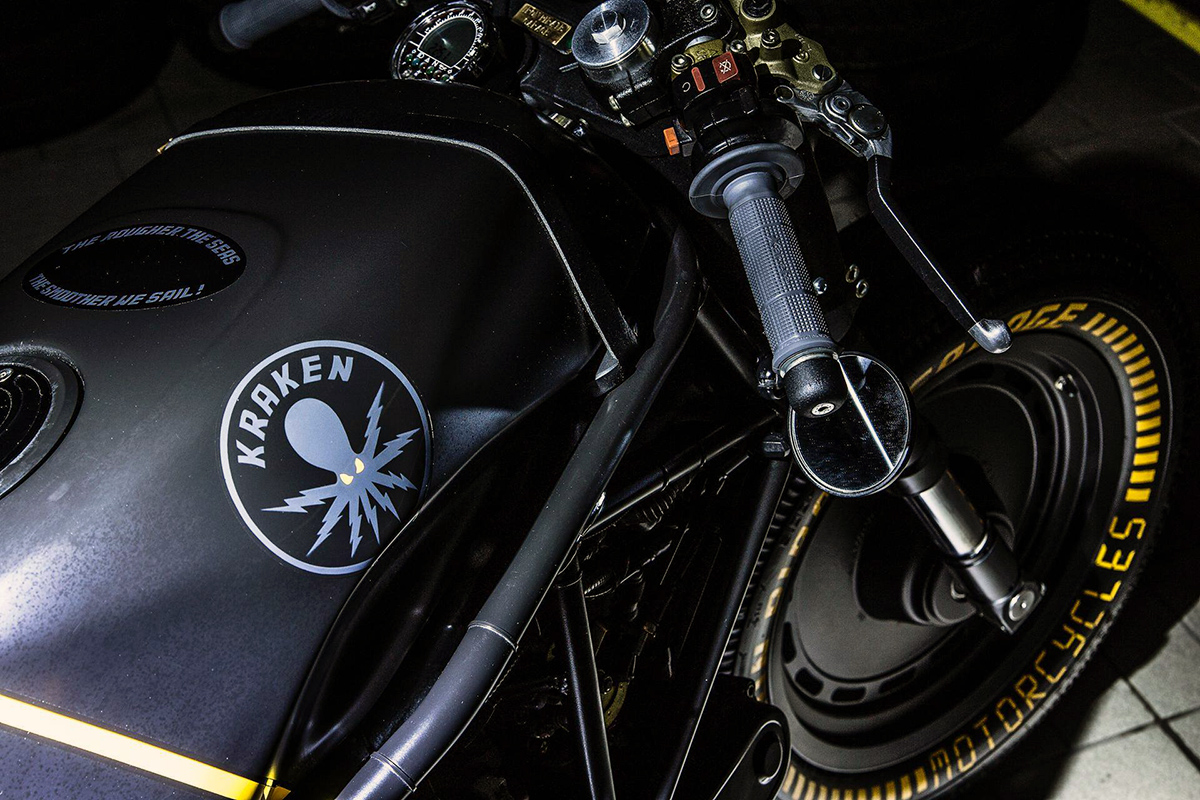 After the plastics were stripped away the Iron Pirate team continued to reduce the size of the Ducati down by cutting away the rear of the frame. In its place they constructed a revised trellis subframe using a pattern or their own design, adding rigidity and a platform on which to mount the bikes custom saddle. 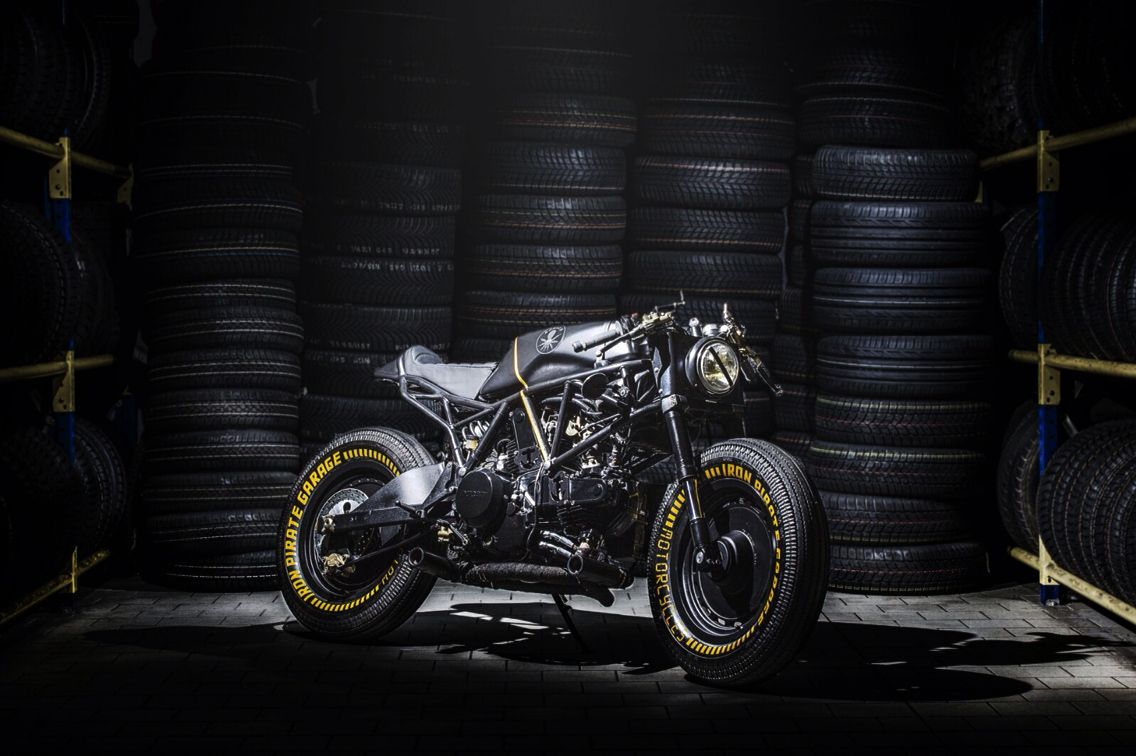 In the place of the original tank is a custom item that lowers the bikes highest point to sit inline with the triple trees. Clip on bars adorn the fork sleeves and an Acewell speedometer sits integrated into the top clamp. The Kraken rolls on Harley Davidson solid mag wheels wrapped in Shinko 270 Super Classic rubber and there’s not a mudguard in sight. When it came to building the bikes exhaust they knew it would have to be loud, and they look to have satisfied that requirement. The two pipes of the underslung system wind around themselves before venting out of the same side of the bike and there’s a distinct lack of mufflers to quieten things down. 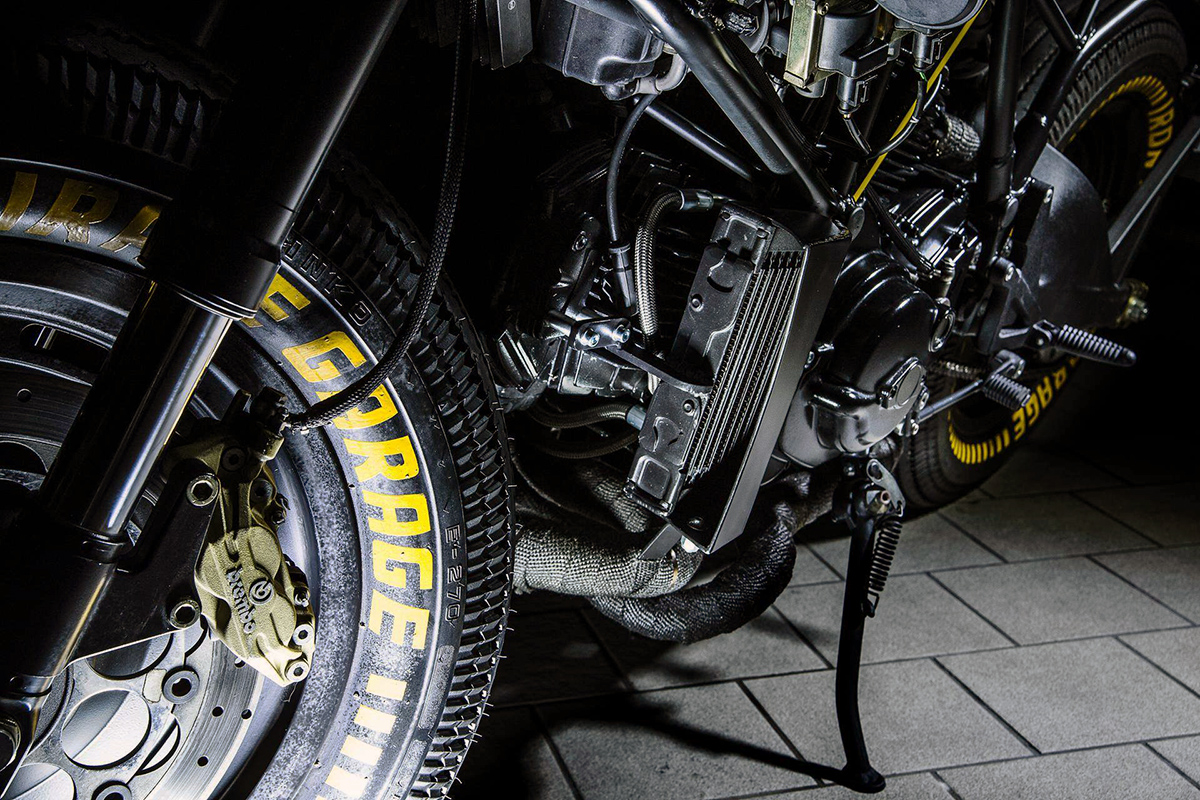 The Kraken’s black and yellow paint scheme has an air of caution signage to it, which is undoubtedly a deliberate similarity. A single yellow line partitions the front of the bike from the rear and the branding on the tires uses dashed lines like those of a caution barrier. The rest of the bike is painted almost entirely black. Satin and matte black finishes across the bodywork, frame and engine give the bike its menacing demeanour and it’s been paired with a black leather seat and pipes wound in a graphite heat wrap. Custom Kraken emblems and the words “The rougher the seas, the smoother we sail” on the fuel tank complete the build.

If ever you’re out on the streets at night and catch a glimpse of something dark lurking in the shadows, don’t be surprised if its the Kraken waiting to take apart its next victim. 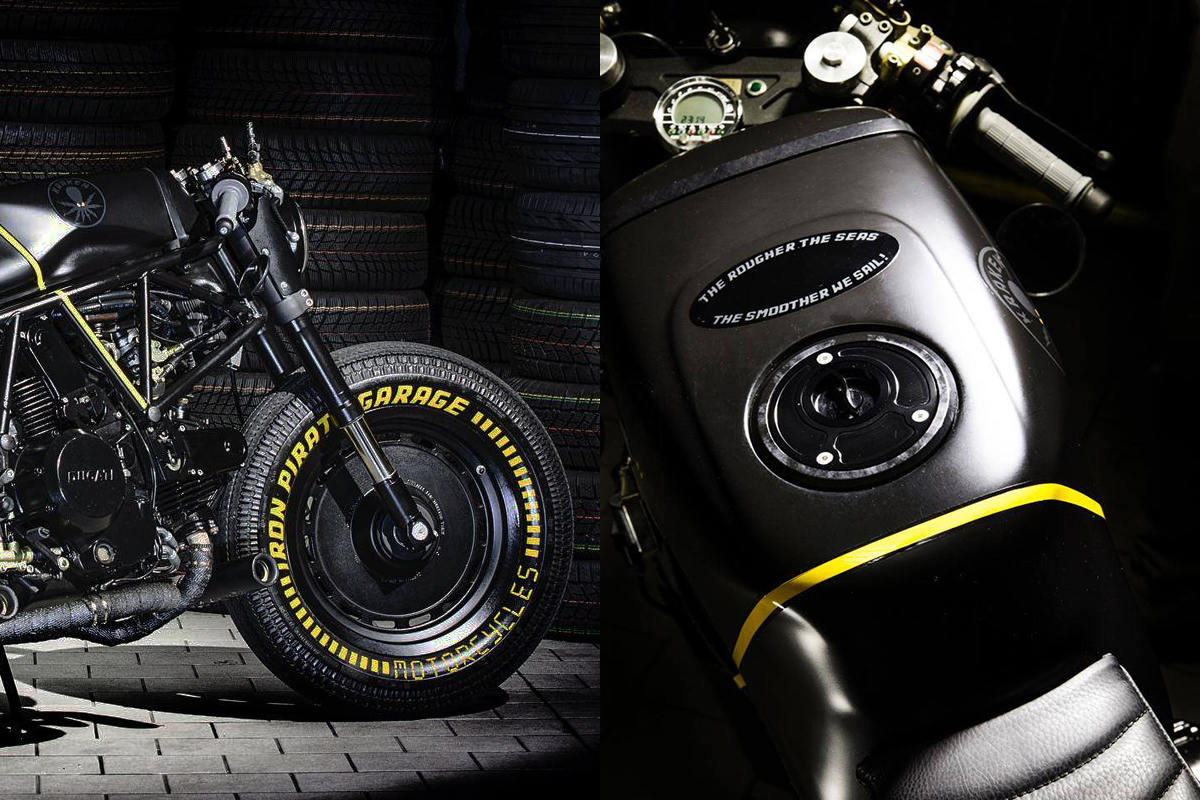 *Eds note: I know, I know… Hades did not create the Kraken. The quote I have used is from the 2010 film ‘Clash of the Titans’.The Kraken is in fact from from Norwegian folklore. 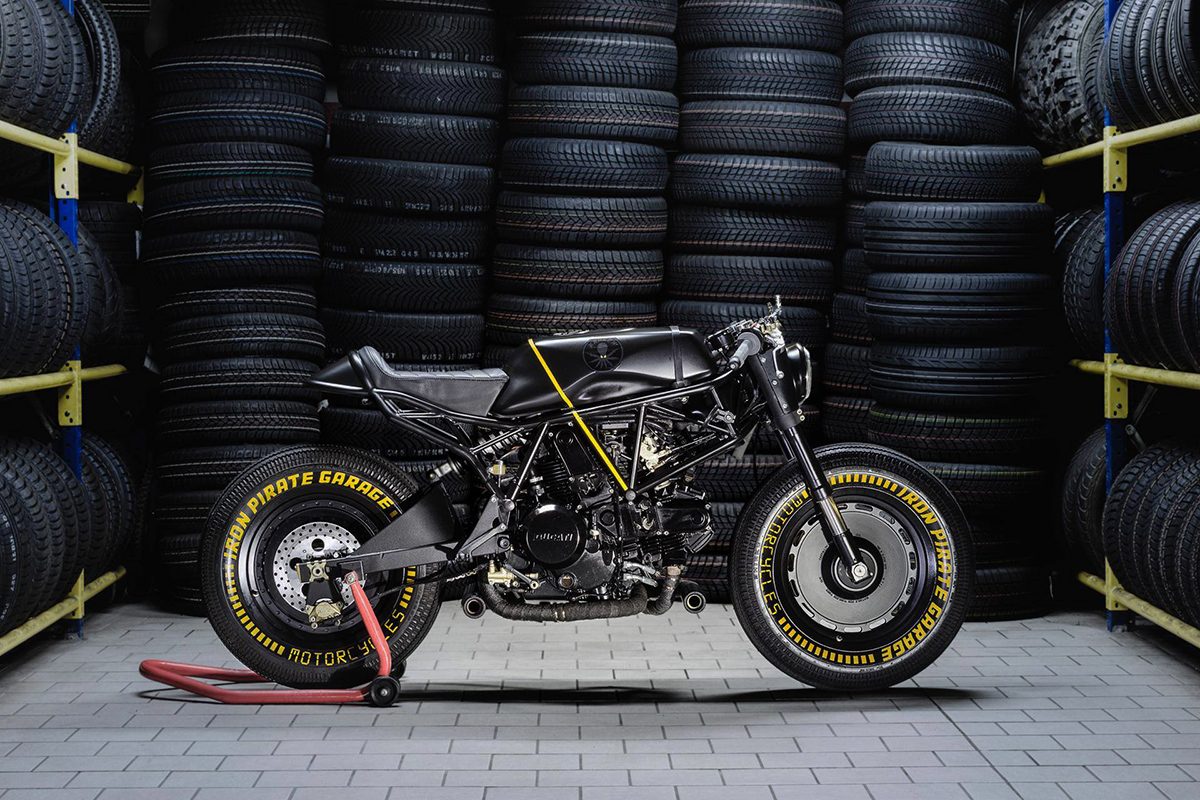 “Zeus convinced his brother Hades to create a beast so strong it could defeat their parents. And from his own flesh, Hades gave birth to an unspeakable horror… the Kraken.”

Just as Hades extracted the Kraken from his own flesh* Italian workshop ‘Iron Pirate Garage’ have freed this beast from beneath the plastic cowls of a Ducati 750SS. The ‘Kraken, as they have so aptly named it, is almost unrecognisable when compared to its former self and takes black paint schemes to a whole new level.