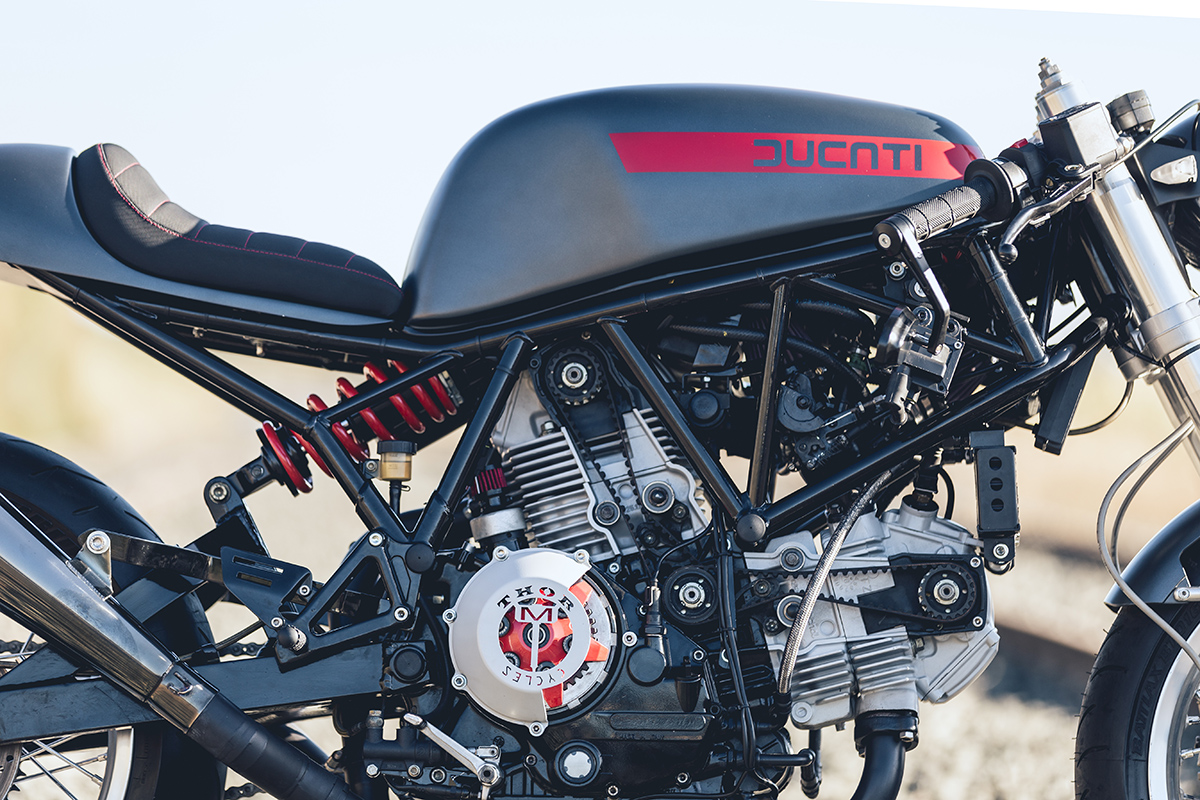 At this point, you might be thinking that we’re going to delve into the story of some OCC styled large-capacity monstrosity that would align with a Thor’s Hammer-type analogy. Incorrect! This carefully sculpted cafe racer is much more akin to a scalpel than a blunt object…

The owner of this surgical tool is Jose Antonio and he handed Miguel his stock 1999 Ducati SS900 with one single prerequisite at the start of the build. That request was that the final product be a unique, unrepeatable design and from that very short meeting, Project SAGA was underway. 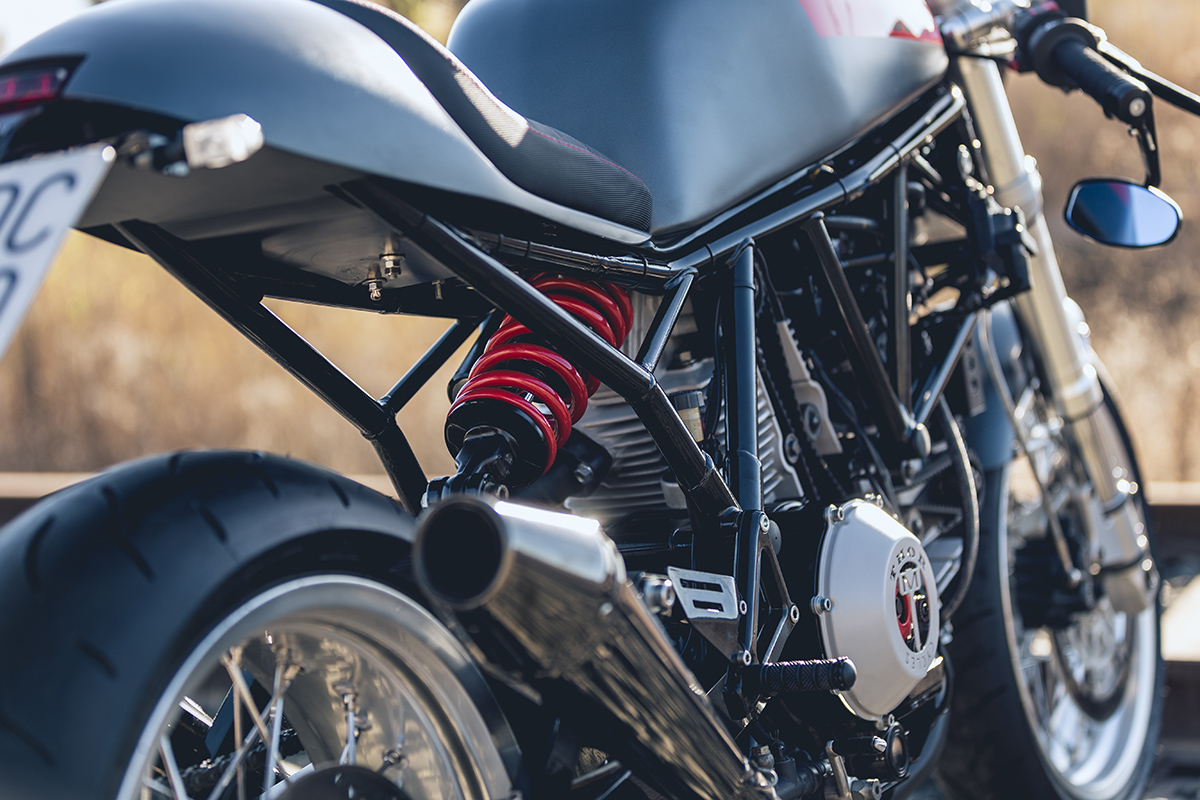 For Project SAGA Miguel and his team at Thor Cycles started things off by revising the Ducati’s rear subframe. If you’re familiar with the design of the SS900 motorcycle you’d know that any sort of chassis work would be quite difficult, and it was. Regardless, the guys got stuck into it and after many hours on the workbench, they had created a new subframe that would accept the single seat unit they envisaged. Once the frame was finished it was sent off for blasting and fresh powder coating. 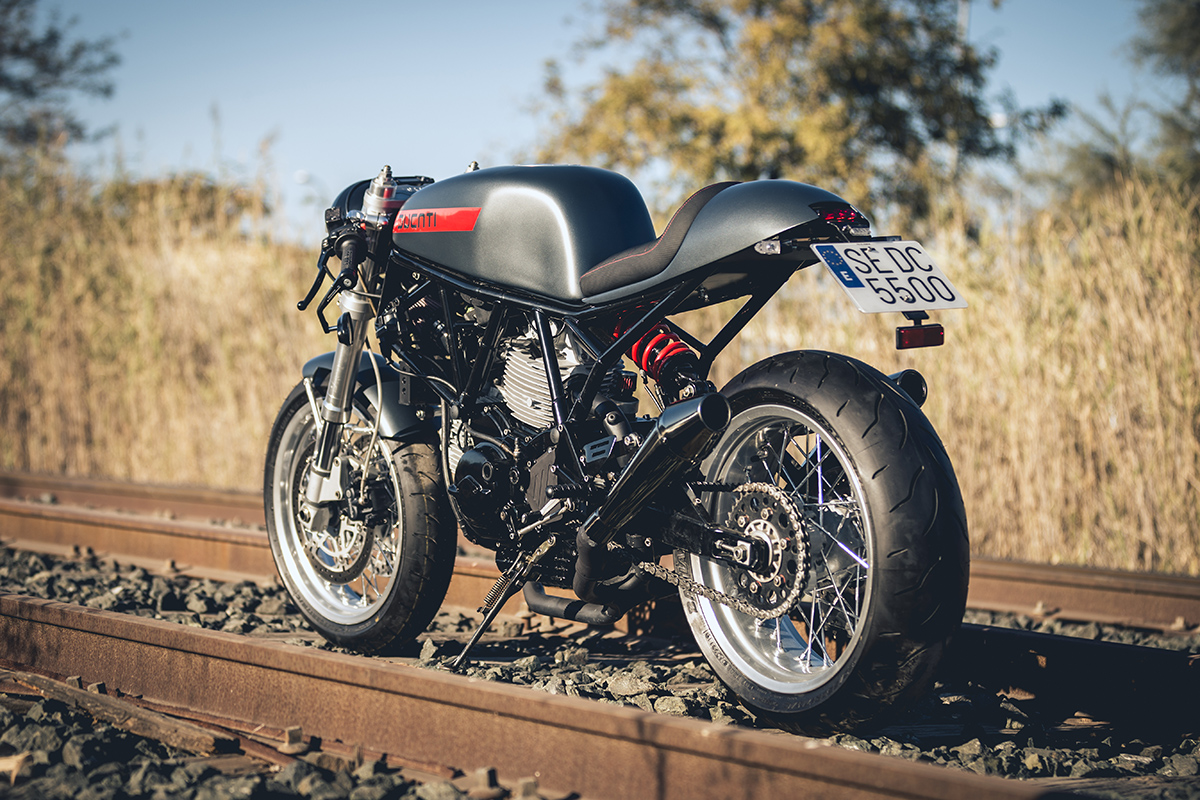 While it was up on the bench the engine had its internals freshened up with new bearings, seals, a new clutch and a custom, laser cut Thor Cycles cover. Since the airbox was removed the engine now breathes through conical K&N filters that were mounted using silicone intake hoses to fit them beneath the tank where space is at a premium. The engine also received a fresh coat of gloss black with the cylinders done in a light satin grey. The spoked wheels were transplanted from a Ducati GT1000 with the front rim requiring only new bearing seals and sleeves to fit. Fitment of the rear rim proved far more challenging. Miguel needed to find a mere 6mm with a new sprocket carrier and brake stay but once it was done the rims were polished to a high shine and fit with Bridgestone Battlax rubber. The brakes were yet another challenge. The stock Brembo calipers fouled on the new spoked wheels so new 2-piston Brembos and 300mm discs were fit both in the front and rear. The GT1000’s front fender also found its way onto the build where it was cut down for a slimmer profile and shorter length. 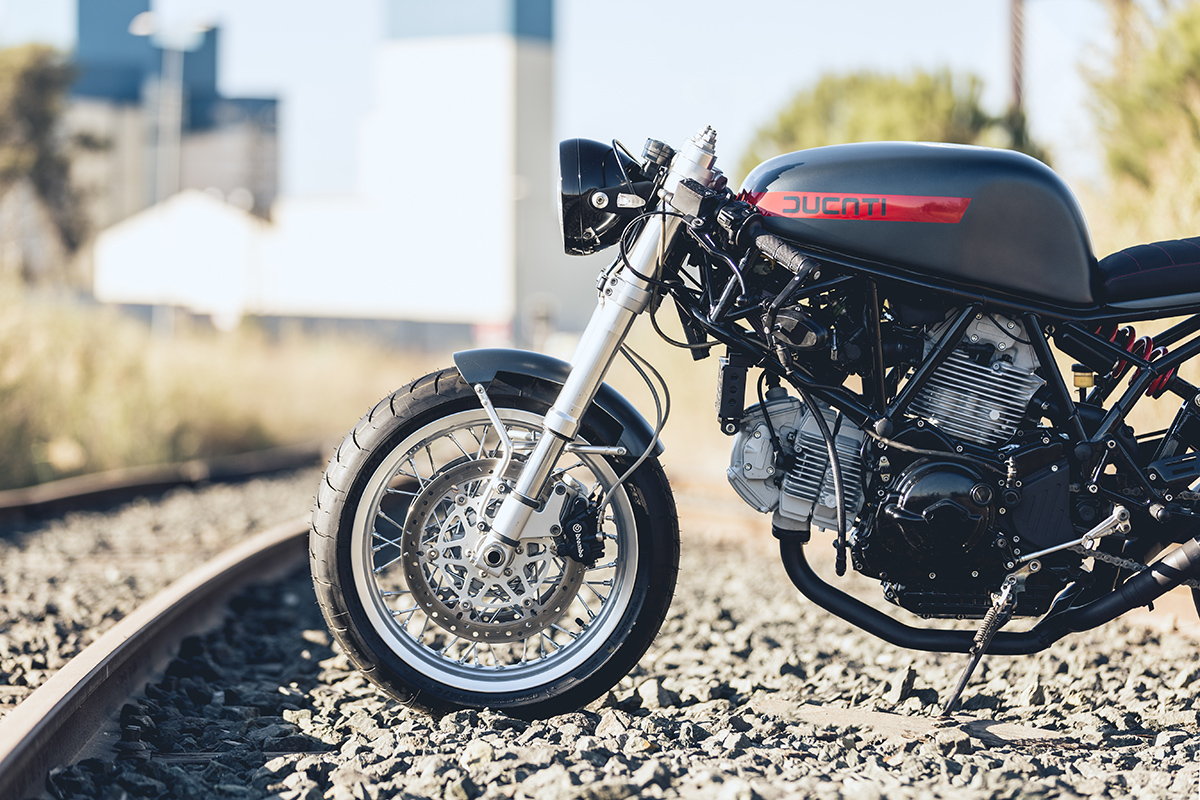 The levers and headlight are Monster components with the headlight positioned lower thanks to a bracket cleverly hidden behind the unit to leave a clear view of the forks and the Tomaselli clip ons.

The stock tank is gone and in its place sits a Ducati 750 Sport unit. The 750 Sport was never available in Spain so Miguel went the extra mile sourcing one in the US. Remarkably it fit well straight out of the box. Just a few small alterations to the front and rear mounting points were made to make it sit flush and center. 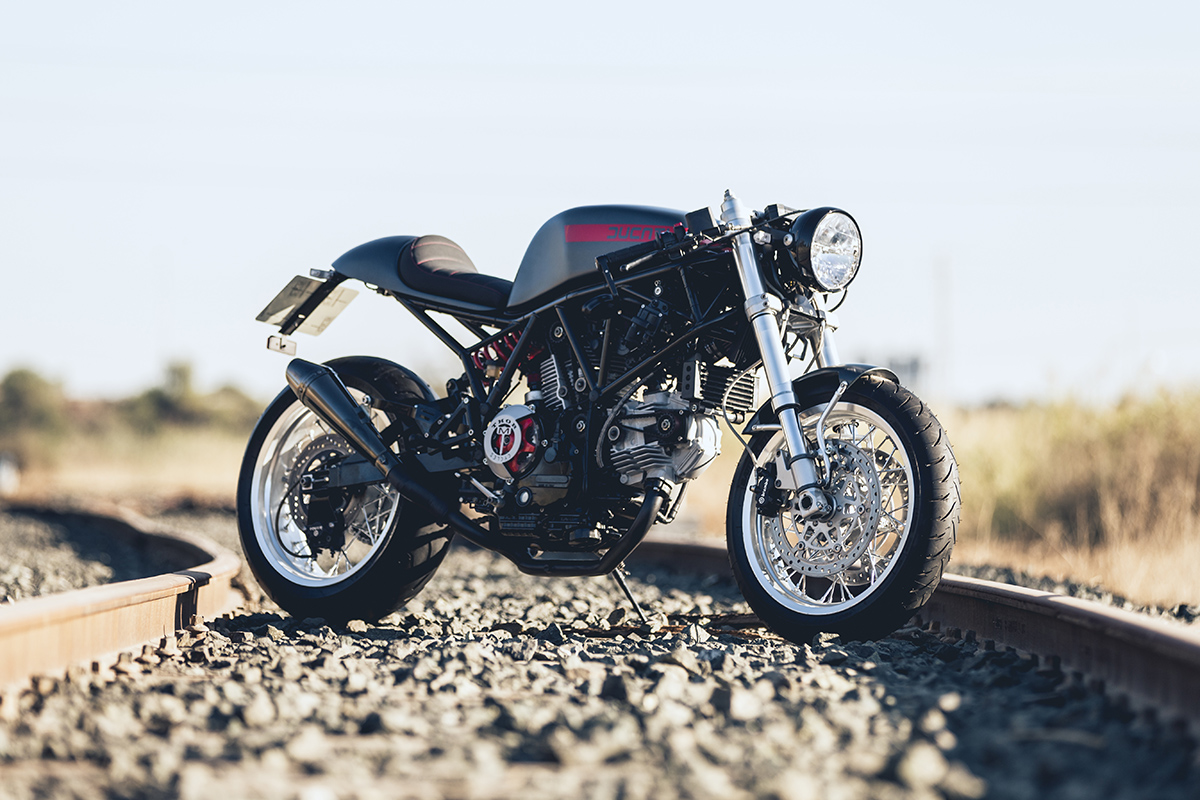 The cafe racer style single seat unit was delivered to Thor from the UK after a few different options were trialed on the custom subframe. The seat pad was made using a PVC base which the guys had upholstered in a dark non-slip material that contrasts beautifully with the red double stitching – it’s an Italian bike so touches of flair aren’t a surprise, they’re expected. The license plate bracket is another handmade item and for this Miguel used 5mm aluminum plate. With the help and advice from his friends at Balfonek Special Parts, the bracket serves as a fender eliminator with the indicators and tail light integrated into the unit to cut down on weight and to simplify the whole rear end. 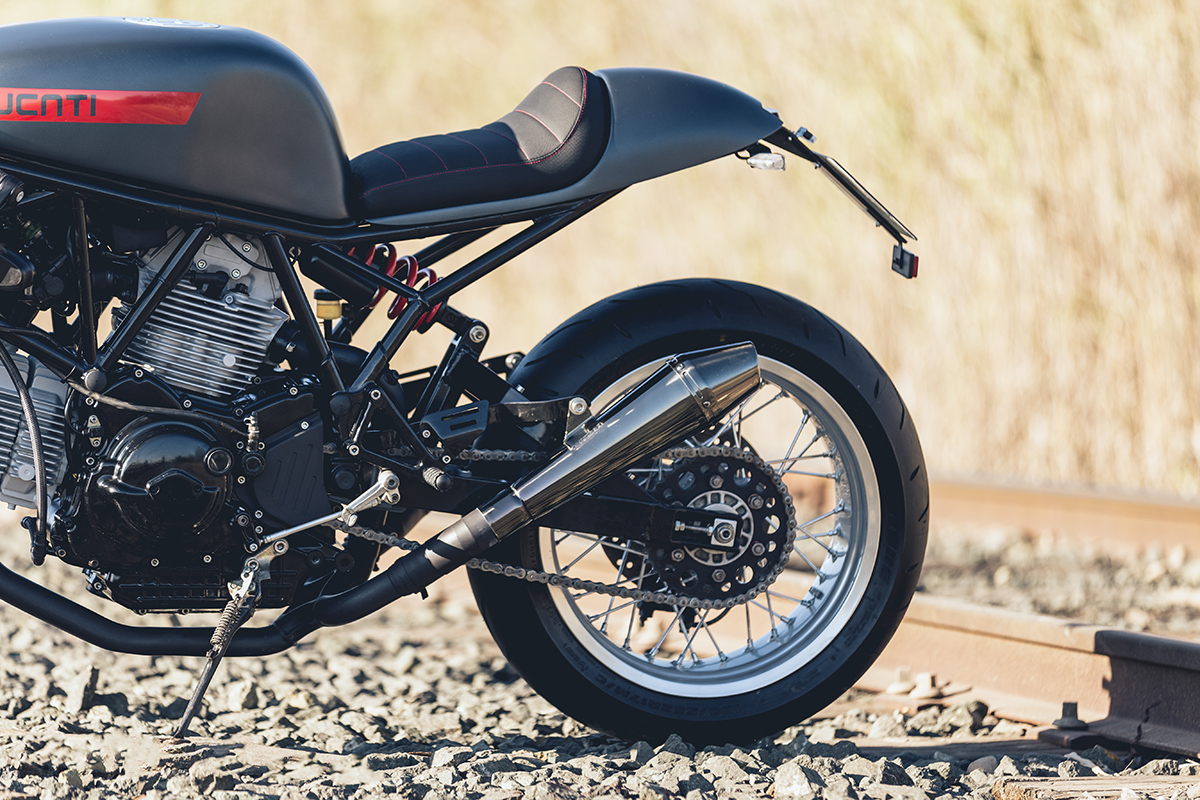 As an owner of an Italian bike myself, I can assure you that the Italian wiring stereotype is deeply rooted in FACT and this build sounds no different. Even though the bike is relatively modern Miguel was still able to cut out almost a meter of spaghetti from the bike! The ignition was relocated to the chassis and a new Koso DB01 digital gauge face takes care of the information delivery. The relays and electrical boards were relocated to under the tank and just to be extra precautious the guys encased the loom in fireproof wrap which is completely hidden from view – a mighty achievement it seems!

The paint was done by Thor Cycles’ good mates at Bull Garage and they have done a stellar job of contrasting the matte grey of the tank with the gloss red Ducati livery. “They were able to understand what we were looking for when we told them that we wanted simplicity and elegance, worthy of an official Ducati model,” says Miguel. 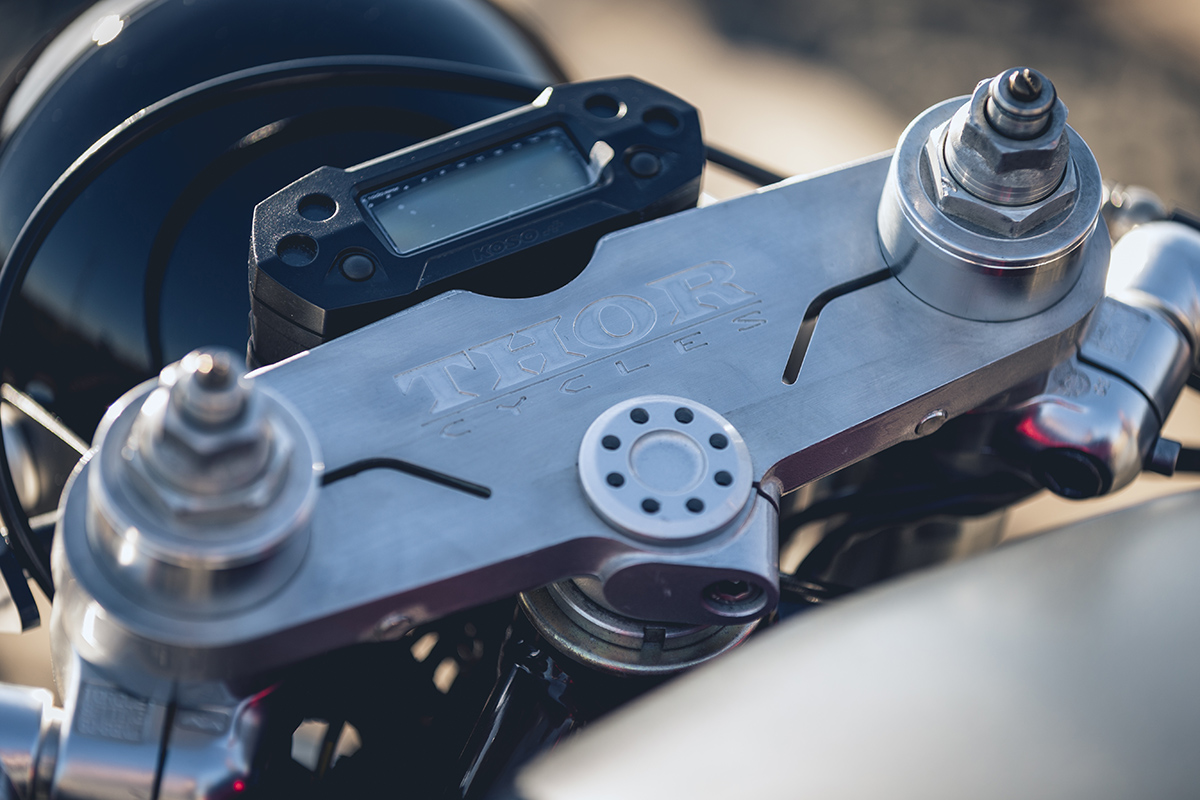 The final piece of the Project SAGA puzzle is another laser-cut item – the top triple clamp. Engraved to give it a very fine brushed aluminum effect it’s a feature you’ll find on all of Thor Cycles’ builds.

As for how it rides Miguel had this to say. “The motorcycle is now 20 kilograms lighter! The K&N air filters, the twin open exhausts and a remapping of the ECU have made the bike a real racing machine!” In our opinion that makes this Ducati the epitome of an Italian cafe racer. 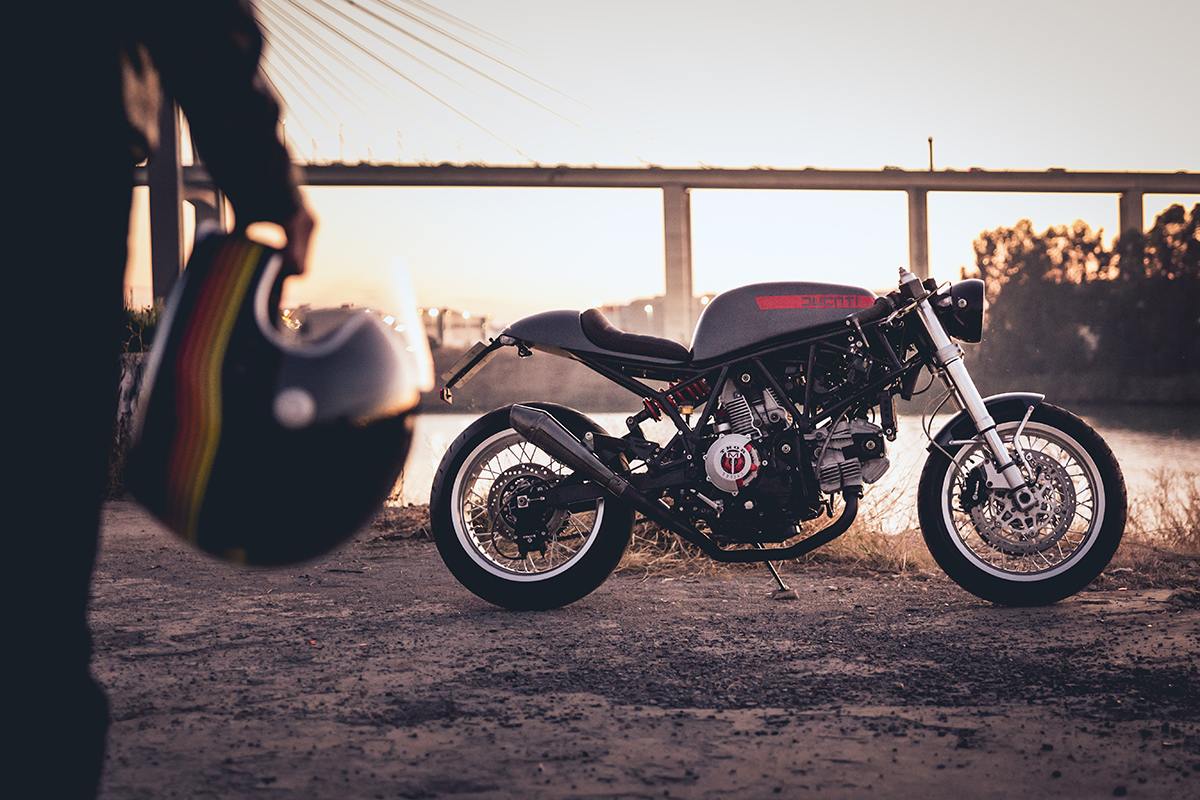 Ducati – my second favorite Italian motorcycle manufacturer. There is no doubt that the Bologna factory has produced more than their fair share of legendary motorcycles. Everybody loves a good legend and today’s tale comes from Miguel, the creator, and manager of Thor’s Cycles.

Miguel, the lucky sod, lives and works in Seville which is in the south of Spain. He describes the place as, “… a sunny place with nice weather and consequently, an area with a long tradition of riding motorcycles all throughout the year.” Mmhmm. Go on Miguel, rub it in as I sit here in what is supposed to be an Australian summer (it’s raining).