Restaurant, hotel and casino chain Hard Rock Cafe are set to open their latest hotel venture on the Spanish island of Tenerife. Hard Rock Cafe is synonymous with rock and roll memorabilia and there’s sure to be no shortage of it covering the walls of the new hotel. To commemorate the opening they’ve done something a little out of the ordinary, they’ve commissioned a custom motorcycle build. To oversee the project Hard Rock engaged Diego “Bermu” Bermúdez the editor of Spanish custom motorcycle magazine ‘Revival of the Machine’.

If you were asked what brand of motorcycle best suited the Hard Rock spirit I’m sure Harley Davidson would be the first that came to mind. So, it comes as no surprise that the donor Bermu acquired for the project was a Harley. However, rather than going with one of Milwaukee’s latest releases he opted for a much harder to find model. A motorcycle of a similar vintage to the Hard Rock brand, a Harley Davidson FXS Shovelhead from the seventies. 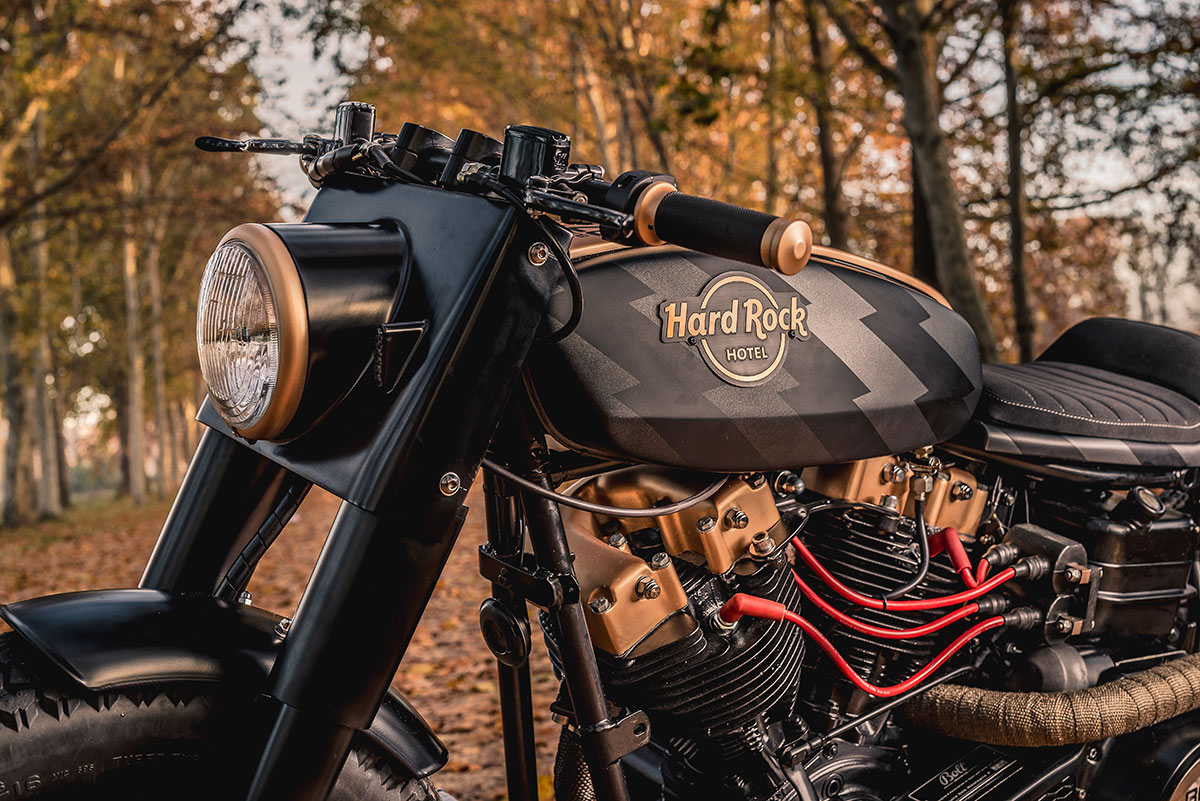 Knowing he needed an accomplished local builder onboard for such a prestigious build, Bermu enlisted the help of Alberto Caimi, head wrench turner and designer at Valencia’s Bolt Motor Co. Together the pair created a concept that would see the Shovelhead transformed into a Harley Davidson cafe racer. They coined the project ‘Old Wine’ because, like a good bottle of wine, this forty-year-old Harley Davidson took time to reach its full potential.

It wasn’t long before Harley Davidson Spain were also getting involved, offering support and sponsorship to see the project through. With access to Harley’s catalogue of parts, the build began with a full engine overhaul. New seals, gaskets and serviceable parts were installed during the comprehensive rebuild. For more efficient combustion, the v-twin’s heads were also converted to a twin spark set up. During the rebuild, Alberto also chose to upgrade the gearbox from 4 to 6 gears. To make clicking through them more pleasant he’s installed a hydraulic clutch too. 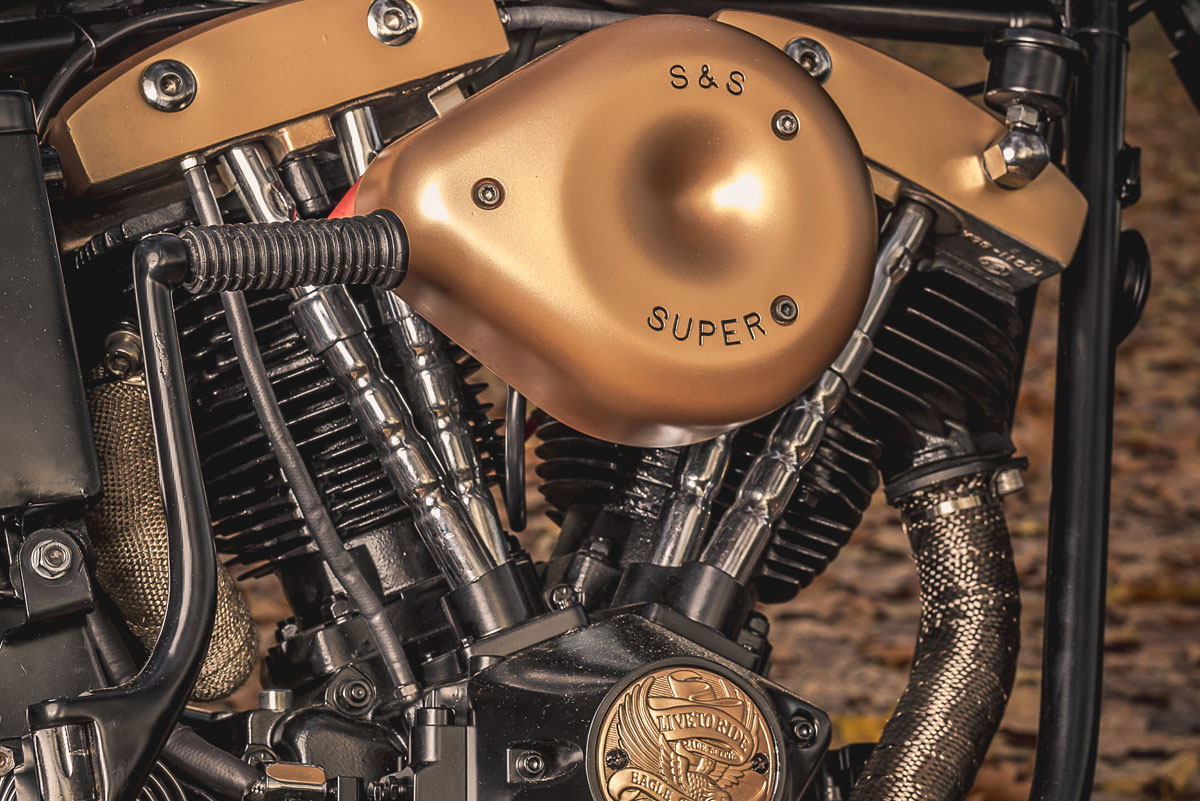 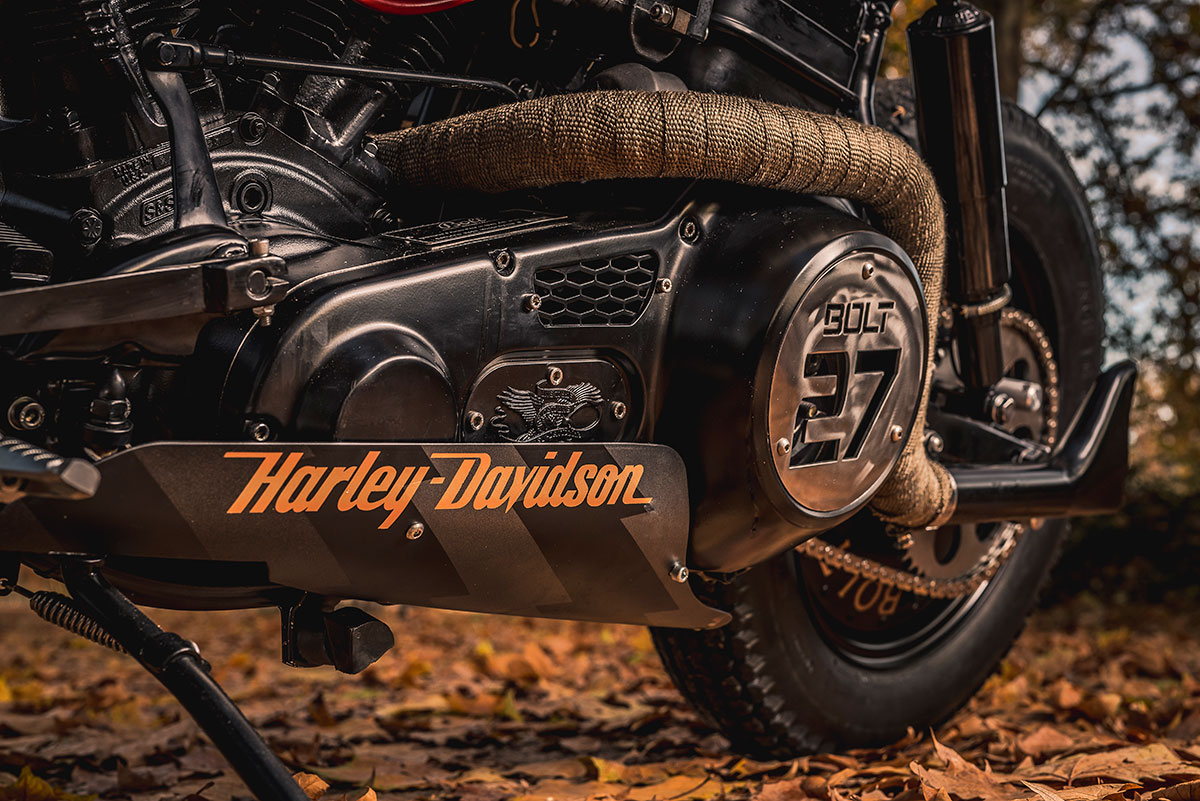 For the sake of preserving a classic, the FXS frame remains relatively untouched. Handling, on the other hand, received a significant improvement. The sleeved forks have had an internal rebuild and there’s a custom made set of shocks out back thanks to Hagon. Stopping power is also greatly improved thanks to a Brembo oversized radial set up. The Harley’s 40-year-old wiring was also in desperate need of a refresh. To overcome the issue it’s now running all the latest gear from Motogadget. Sitting perched on the top clamp is another Motogadget item, a Motoscope mini speedometer and the low flat bars are from Renthal. 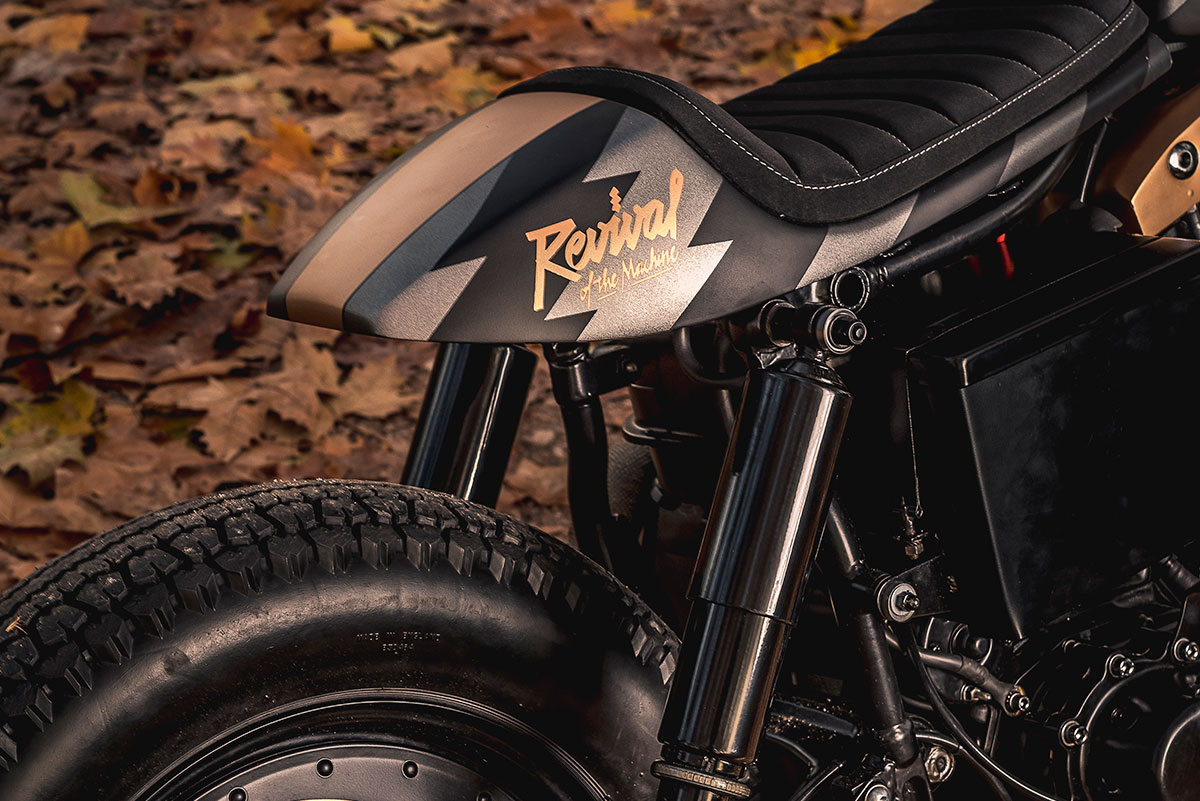 In my opinion, standard Harley Davidson fuel tanks don’t suit the cafe racer aesthetic. Thankfully, Bermu and Alberto agree. To get around the issue Alberto has shoehorned a ‘60s BSA race tank onto the Shovelhead frame where it looks right at home. Sitting just above the heads and level with the bike’s headlight he’s managed to create a balanced bone line despite the Shovelhead’s hunched backbone. For the rest of the bodywork, he opted to build it everything from scratch. Components such as the front fairing, tail and belly pan have all been hand formed from stainless steel sheet. A Bolt derby cover was also added to the engine and custom foot controls created. 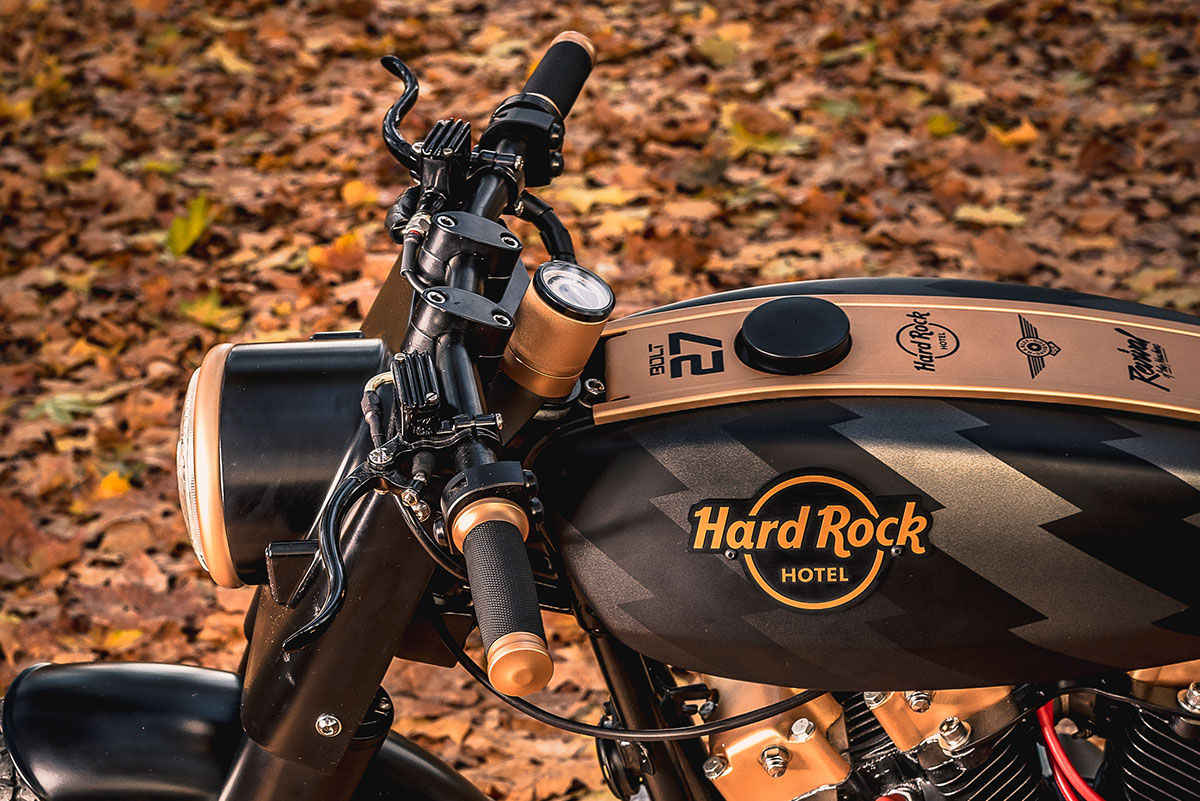 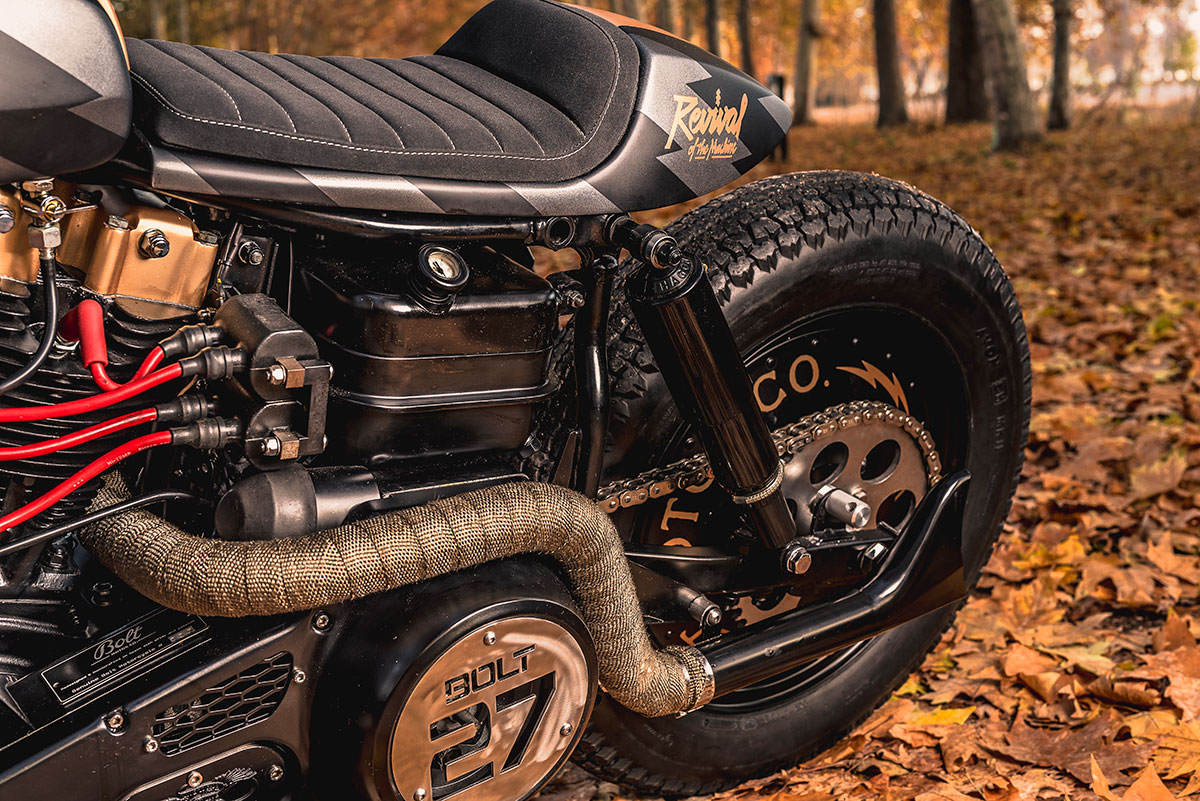 As for the striking paint covering this Harley Davidson cafe racer, it is the work of F1 helmet painter Rafa García-Cano. Along with laying a bolt themed scheme on the bodywork Rafa gave the v-twin a lick of black and gold paint. He also added a touch of race style livery by placing each brand’s logos along the spine of the tank. Naturally, it’s a Hard Rock Cafe badge that takes pride of place on the tank.

Old Wine will soon be unveiled at the Hard Rock Tenerife hotel before going on tour. Then in autumn of 2019, Old Wine will be one of the special guests at the inauguration of another new Hard Rock Hotel in Madrid.

Photography by Revival of the Machine 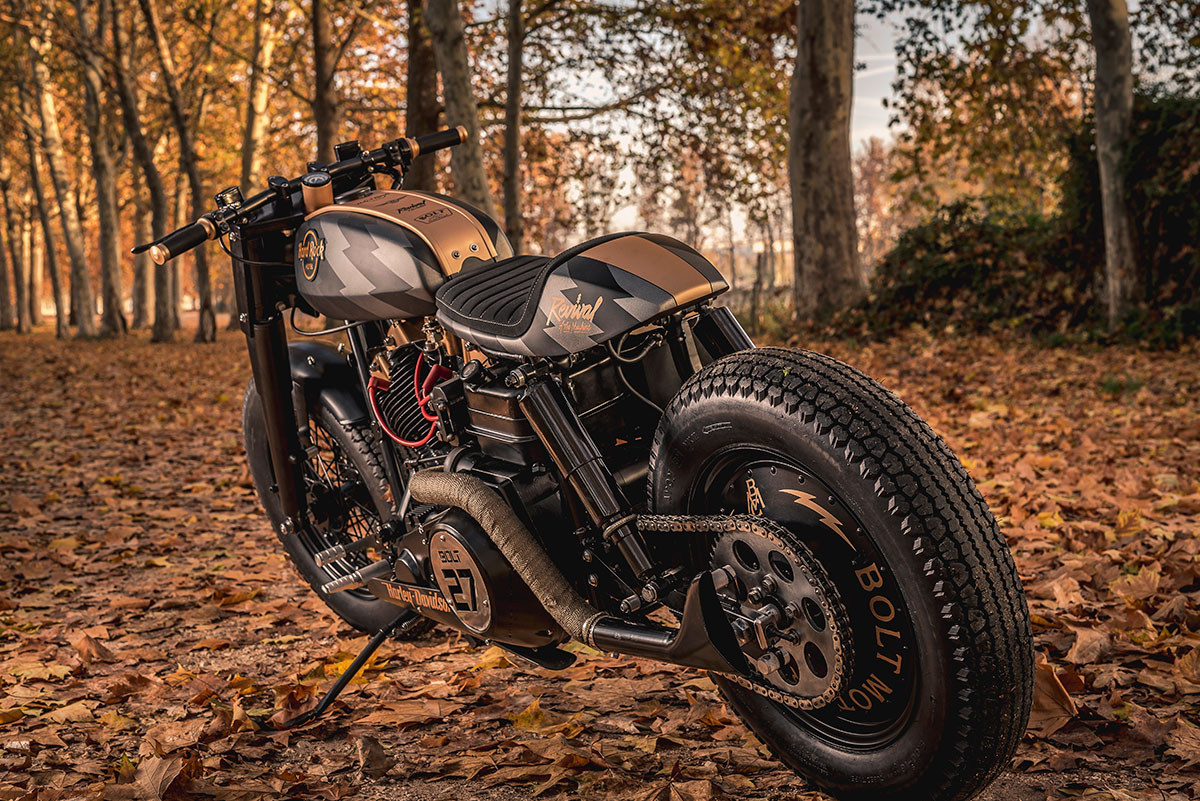