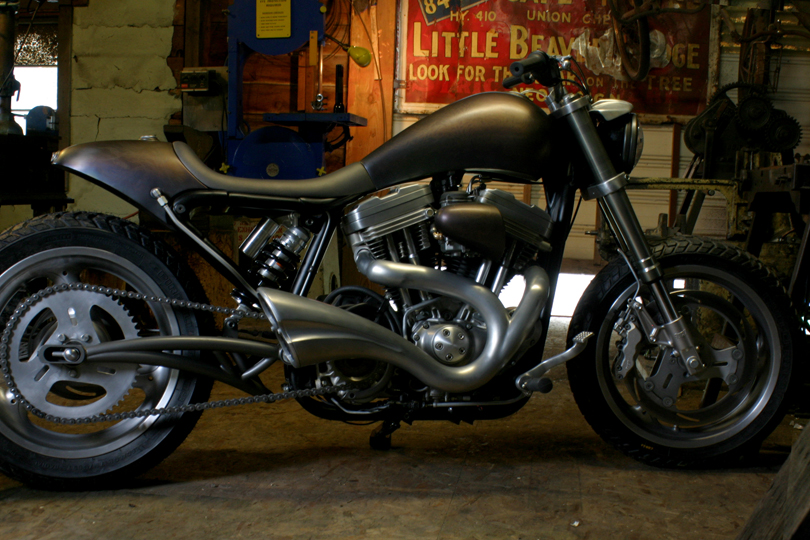 Last year Joe Cooper of Cooper Smithing Company grabbed our attention with the raw steel, hand formed bodywork of his Yamaha XT500 Cafe Racer. With his latest build the Gun Baby, he’s returned to the Harley Davidson platform that won him a second place at the 2010 AMD World Championships. Starting out with a Harley Davidson XL883, some Buell components and a pile of sheet metal, Joe set out to build this bike with one thing in mind…fun. 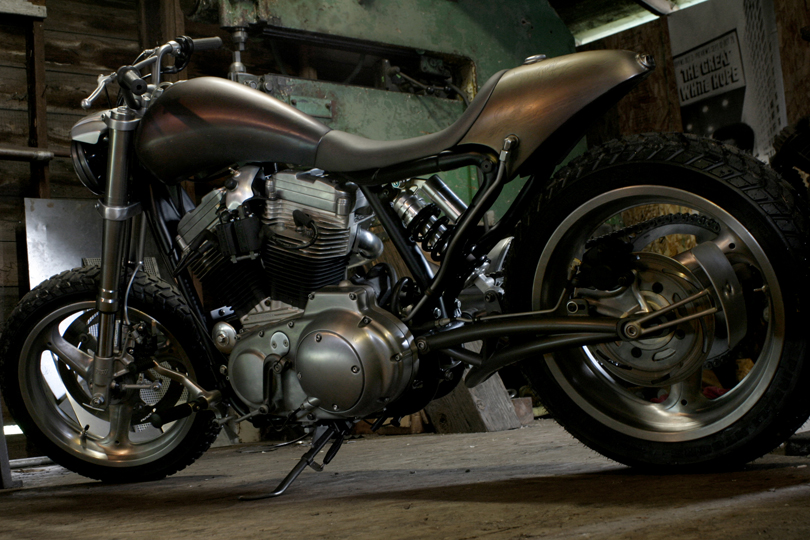 “I really like this powerplant because it is geared low and has plenty of torque for quick throttle response. For me, it’s more enjoyable to build around an engine where the power to weight is such that you can pin the throttle wide out more often, rather than being over-powered and overly cautious. I’ve always liked getting to 30mph in a snap more than I’ve liked riding at 150mph, so I carried that idea through with the chain conversion and larger rear sprocket. The rear suspension was updated to a progressive monoshock, carried by a custom swingarm which has been beefed up to handle the extra torque. Custom 2-into-1 headers were added and again, increase the low end torque, and as anice bonus keeps a super low exhaust note that just sounds unreal.” 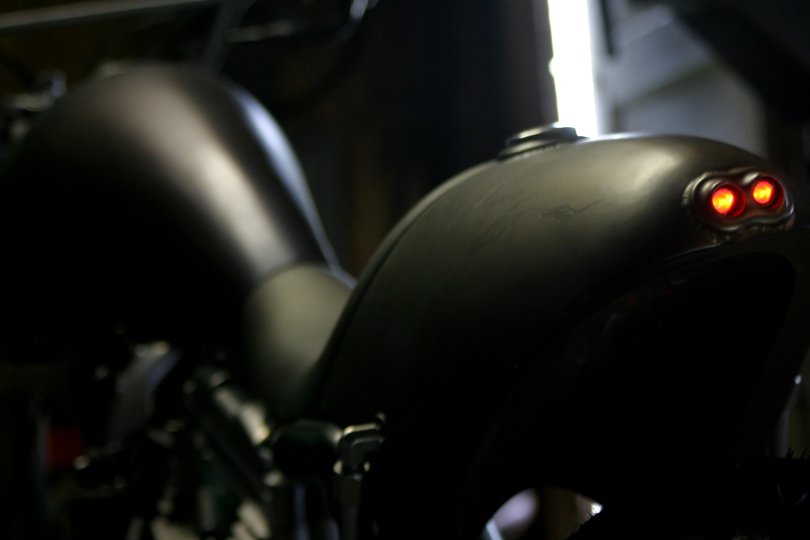 “Other engine modifications include a bulletproof, solid-state, Dyna-Tec single-fire ignition. Power to the plugs comes via an ultra light-weight lithium iron battery secured between the front frame rails. Everything else has been dismantled and set back to stock configuration, save for carburetor jets which needed to be enlarged to match the exhaust flow.” “The oil tank is built into the rear fender and features a much higher capacity that keeps the oil temperatures down. Both the rear fender and hand-built fuel tank were left in raw steel and finished by way of acid etching from a local artist. The flame treatment used resulted in an iridescent-type quality that ranges from golds and straw-yellows to deep purple, reds and even blue. I don’t believe there is a camera around that could accurately capture the finish – truly something that must be seen with your own eyes. I was so impressed with the finish, the bike was named “GunBaby” after the artists shop.” 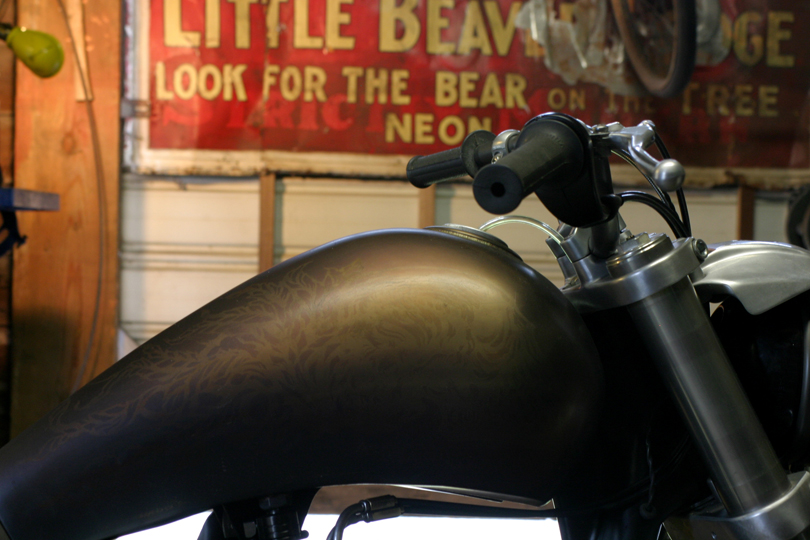 “The bike weighs considerably less than the donor Buell from which the brakes and front end were taken, resulting in an abundance of stopping power. To battle this, the master cylinder’s bore was increased and mounted to the front fork opposite the massive 6-piston caliper. The cylinder is cable-actuated feeding up to the front lever, and this has created a greater sense of feel to the entire braking system, along with adding loads of adjustability.” 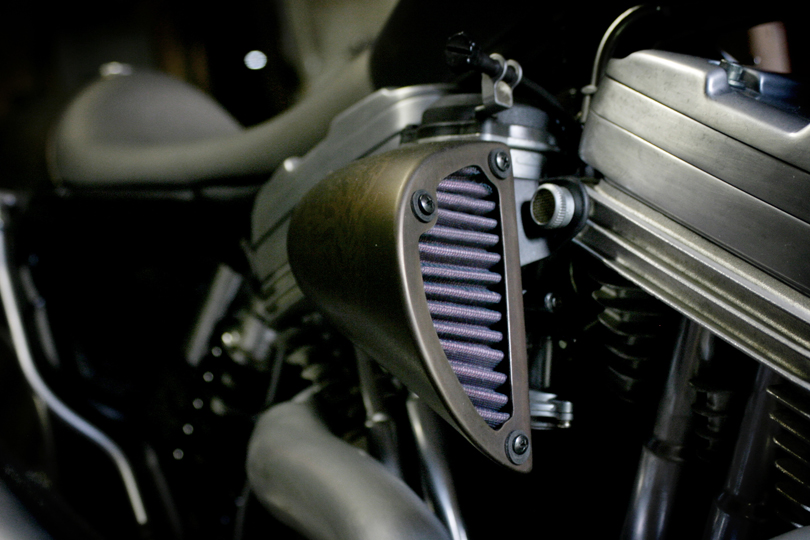 “The GunBaby is easily one of the most enjoyable bikes I’ve ever ridden. It’s low seat height, tight suspension and comfortable control positions coupled with low-gearing and torque gives it such a solid feeling. It’s incredibly difficult to ride without a big smile. You catch a lot of bugs that way, could be a major design flaw I should try to work out next time.” 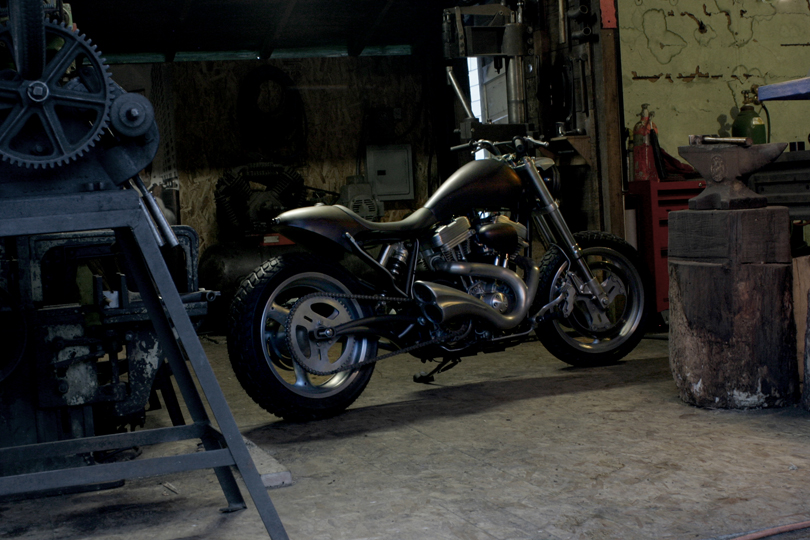 To see more of Joe’s custom motorcycles and his amazing work with steel go to Cooper Smithing Co.