Motorcycles and coffee are two items that appear on my list of things that I can’t live without, which is rather fortunate. Through my observations, motorcyclists spend a great deal of time in and around cafes, just like musicians seem to spend a lot of time in and around bars. The never-ending search for the perfect road will always feature a visit to a cafe. This gravitation towards places to get a caffeine recharge and to meet with fellow riders is exactly how the term ‘Café Racer’ came about. The undeniable connection between cafes and riders became the inspiration for this custom Harley Davidson Sportster, the aptly named BAR!STA. The ‘BAR!STA’, an atomic age-esque custom Harley Davidson Sportster, was built by a very talented bunch of Germans who go by the name Mainhattan Choppers. From the outset, the Mainhattan crew wanted to create something unique. so after the donor, a Harley Davidson XL1200C, was delivered to their workshop by a customer they called in their friend and regular collaborator Ian Alderton. Ian sounds like just the type of guy we’d love to chat with over a coffee. For 19 years he worked in the R&D department at Honda Europe and his past personal projects include building a Triton at age 21 before moving on to complete a Rickman Bonneville, a Moto Guzzi Le Mans and a Ducati Mike Hailwood Replica. 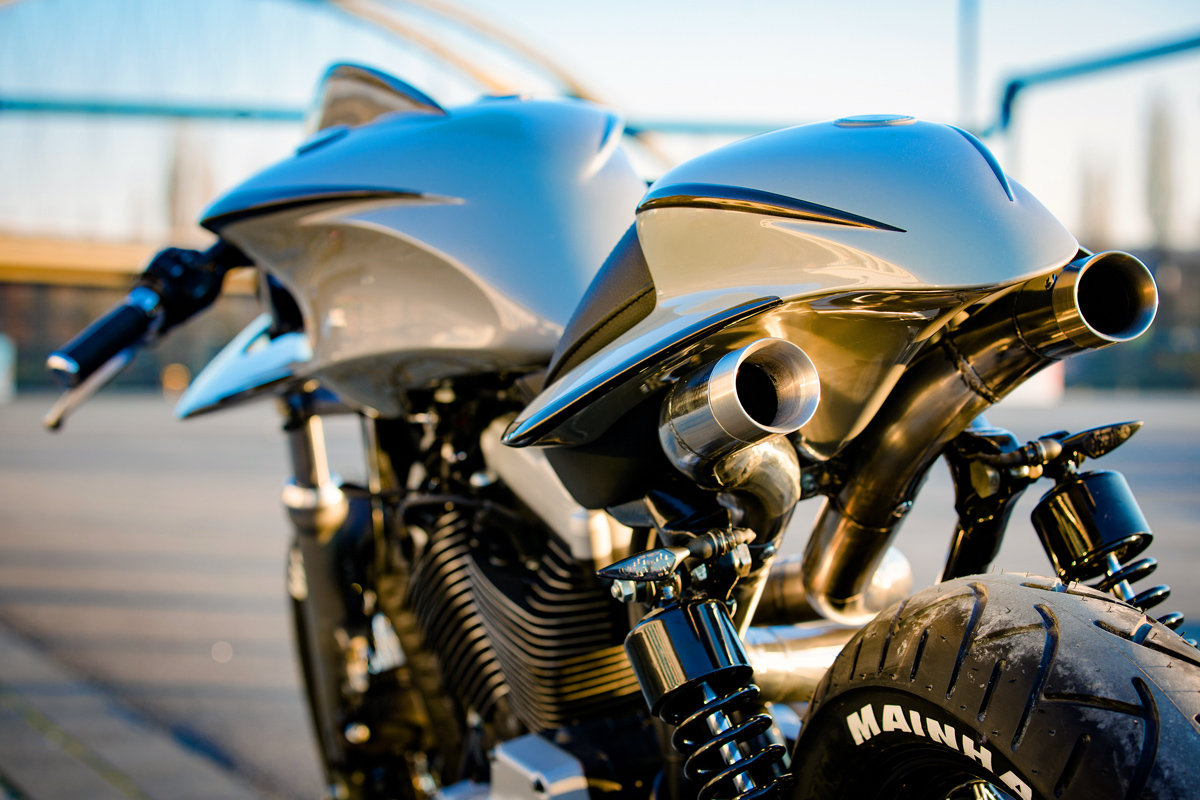 By far the most stand out feature of the Mainhattan BAR!STA is its unique bodywork, which is no coincidence. The goal of this project was to create something that would attract new customers to the Mainhattan workshop so along with being a serious head turner they set out to develop a limited production ‘kit’ bike. Ian and the rest of the Mainhattan team developed the design through sketches. Then using traditional automotive design techniques they translated the sketches into clay before forming them using glass-reinforced plastic prototyping.

The winged design of the Harleys front end blends seamlessly into the tank to form a single unit. The side wings flow around the front forks and clip-on handlebars while the top wing rises up over the yoke mimicking the silhouette of a bikini fairing in a uniquely abstract fashion. Rather than a traditional horizontal bone line which is prevalent in the current cafe racer scene, the BAR!STA is a collection of beautiful swoops and curves, reminiscent of Corvettes and Shelby Cobras. The lines of the tank flow seamlessly into the bikes single seat and back into the tail unit that echoes the design of the tank. 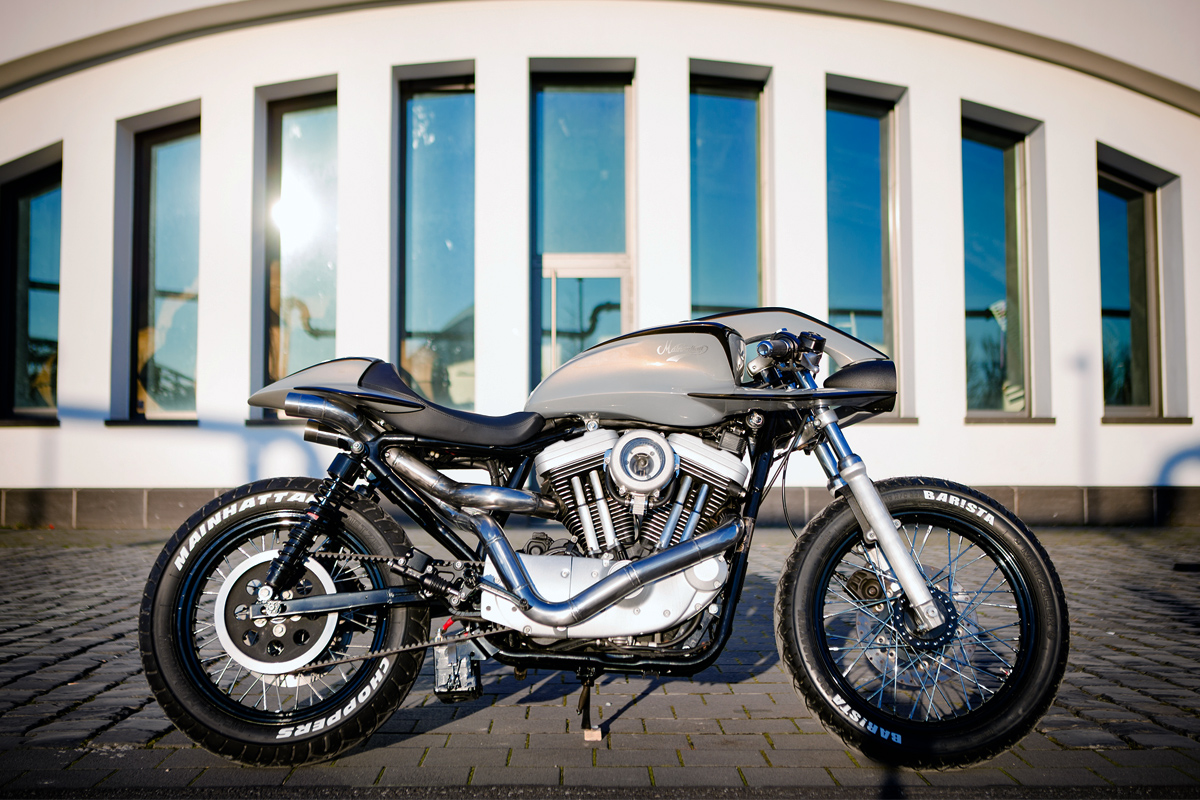 The large diameter 2-into-2 exhaust which creeps around the v-twin before exiting out either side of the tail was built made in-house by the Mainhattan team. They openly admit that the system is “basically an attention grabber” but as far as we are concerned warm buttocks in the name of design is fine when it looks this good.

To finish off their first BAR!STA build Mainhattan coated it in an understated two-tone paint scheme that allows the bodywork to speak for itself. Ian has also designed a series of BAR!STA paint schemes based on various themes that range from 1960s Corvettes, Cadillacs, Shelby Cobras and even a Mustang P51 fighter plane complete with graphics. As for the aftermarket parts, you will find on the bike (speedometer, footrests, indicators, rear lights etc.) Mainhattan says “these were specifically chosen from various suppliers to fit in perfectly with our ‘rocket’ design concept.” 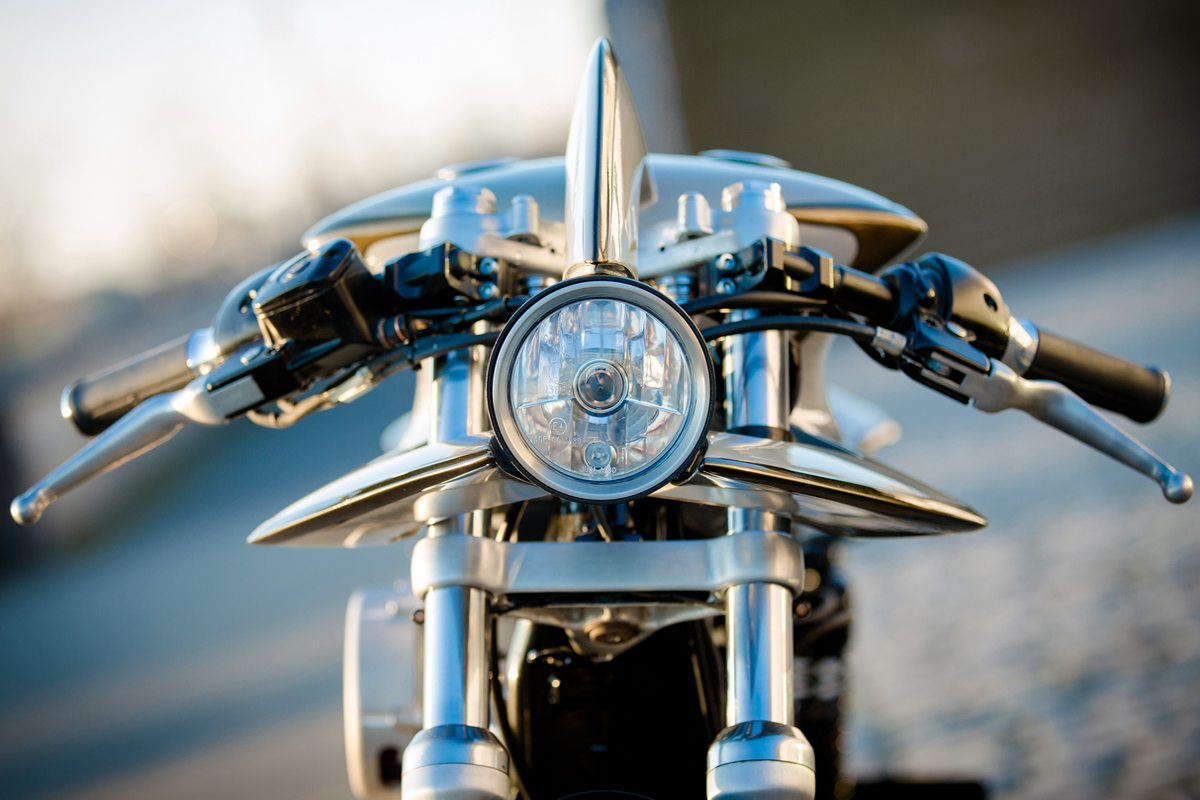 Since the beginning of the project, BAR!STA’s tank, tail, and seat were planned to be sold as part of a small scale production. It took 3 years to develop the design, alongside normal workshop business. Due to the extensive development hours invested in the build BAR!STA customers will be able to choose from a neo-classic, futuristic-modern or retro-elegance version of the bike by selecting from different exhaust, handlebar, wheel and accessory combinations.

A BAR!STA can be built upon any Harley Davidson Sportster model be it fuel via injection or a carburetor and pricing starts at around 15,000 Euros. If you want to see the bike in the flesh before clicking buy now it will be on show at the 2018 Glemseck 101 and the Monterey Cafe Racer Festival. 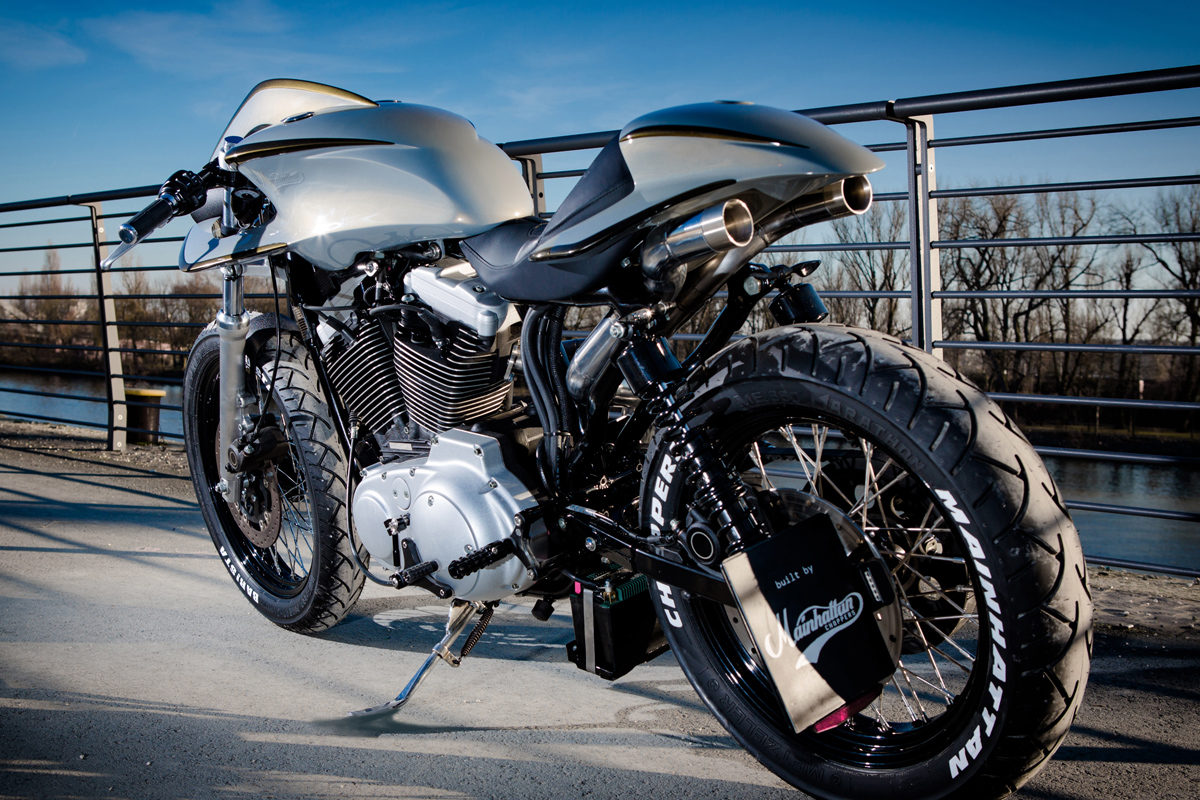