When we think of off-road motorcycles it’s often the bright orange bodywork of KTM that first comes to mind. The Austrian manufacturer earnt this reputation through 67 years of manufacturing and by winning countless enduro and motocross events. On the other hand, when we think of modern classics, KTM wouldn’t even get a look in. Each of the motorcycles in the current KTM road range is an angular, futuristic-looking naked sports bike or supermoto. Jonathan Evan, the man behind Indonesia’s Minority Custom Motorcycles, would like to have us thinking otherwise. This bike is Jonathan’s take on an alternative design approach to the KTM RC 250 that turns it into a brazen neo-retro cafe racer. 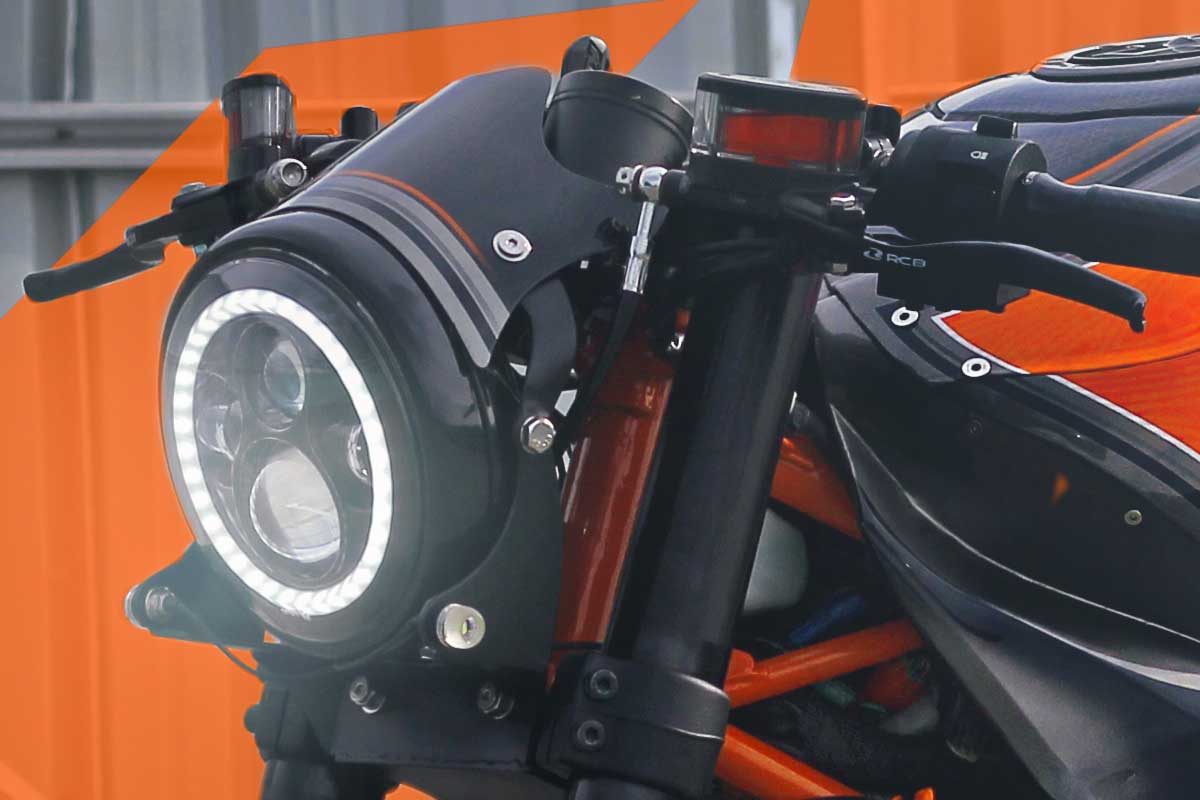 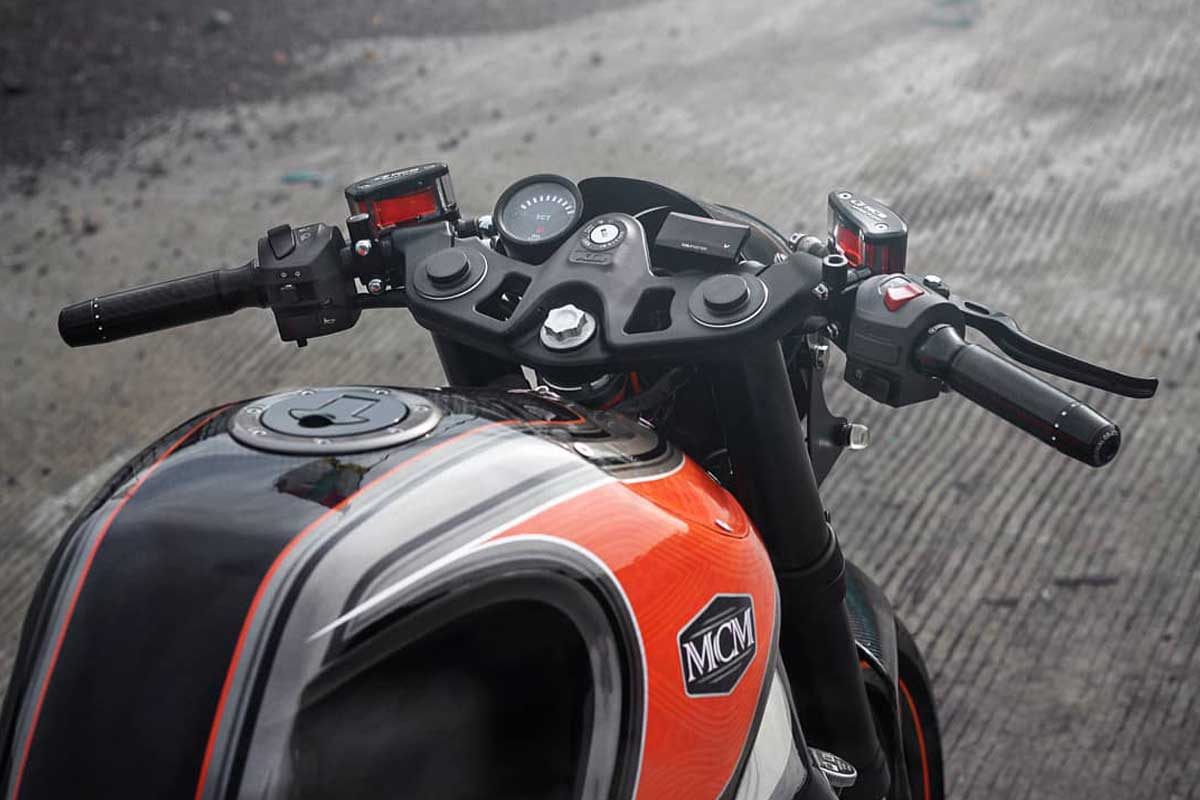 “We believe that simplicity can bring out the beauty of a motorcycle.”

Work on the bike began when a customer shipped his beloved KTM RC 250 from an island in the eastern reaches of Indonesia to MCM HQ in Surabaya, Java. That’s a journey that takes one week to complete so it goes without saying the owner had a lot of faith in his chosen workshop. For the outset Jonathan’s goal was clear. He wanted to create a bike that used a totally different design approach to KTMs with the RC 250 platform. The goal was to create a cafe racer that celebrated the RC 250’s signature, bright orange trellis frame and had the look or a modern cafe racer. Johnathan’s moto for MCM is that “We believe that simplicity can bring out the beauty of a motorcycle” and he’s honoured it with this project.

The most obvious place to begin was with the removal of the KTM RC 250 angular bodywork. In its place, MCM has installed a bevvy of custom made, cafe styled components. Starting with the fuel tank it’s a hand-shaped piece made from steel sheet. The new-look replaces hard lines with smooth curves for an undeniably retro-inspired aesthetic. To ensure their modifications wouldn’t detract from the bike’s performance the MCM tank holds just as much gas as the stock unit. In the rear, a few small changes to the subframe tightened the KTM’s proportions and prepared it for a wasps tail rear cowl. An integrated brake light and custom upholstered seat complete the new look. 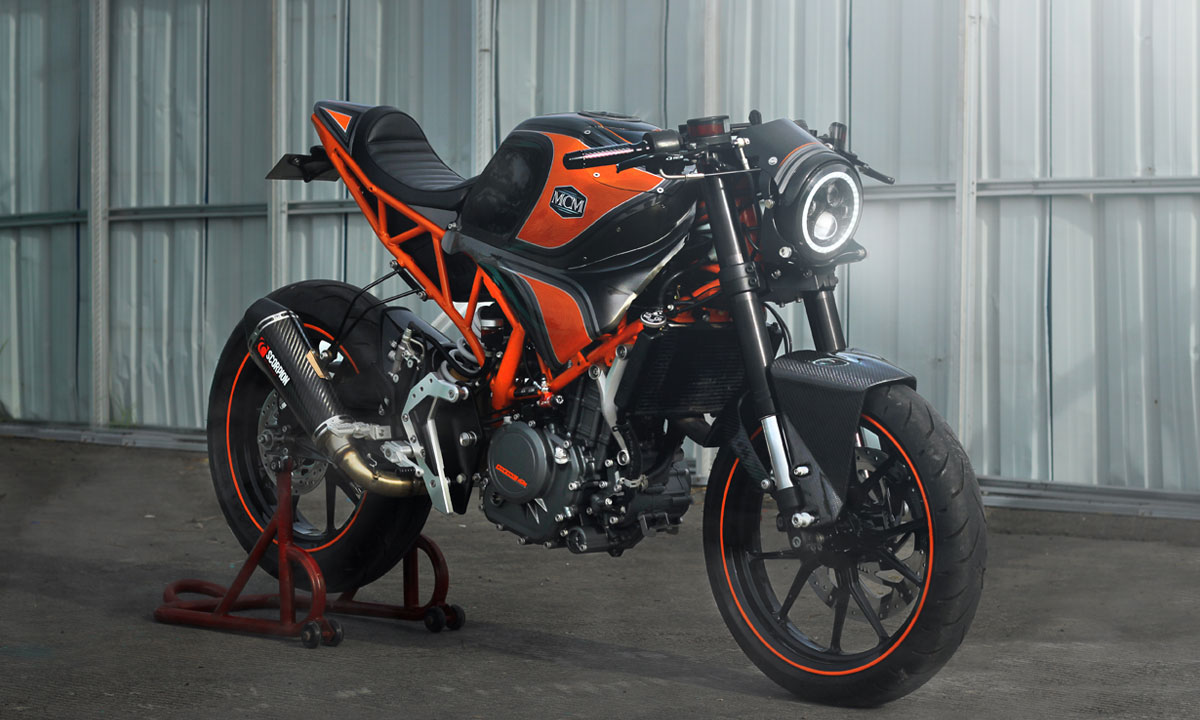 In keeping with the bike’s modern engineering, MCM has upgraded all the lighting to use LED solutions. Most notable is the halo style LED headlight with its small wind deflector and its custom bracket with integrated LED indicators. With the removal of the KTM bodywork, a lot of the bikes unsightly electrics were exposed. In order to keep them out of sight, a set of custom side panels that flow down from the tank were bolted to the frame.

Due to the fitment of a custom seat and clip-on handlebars, the seating position was drastically altered. This prompted the installation of rear-set footpegs. To get the most out of the extra ground clearance MCM has wrapped the wheels with grippy Bridgestone Battlax tyres. Overall performance also got a boost with the installation of a custom stainless exhaust system and Scorpion carbon fibre muffler. 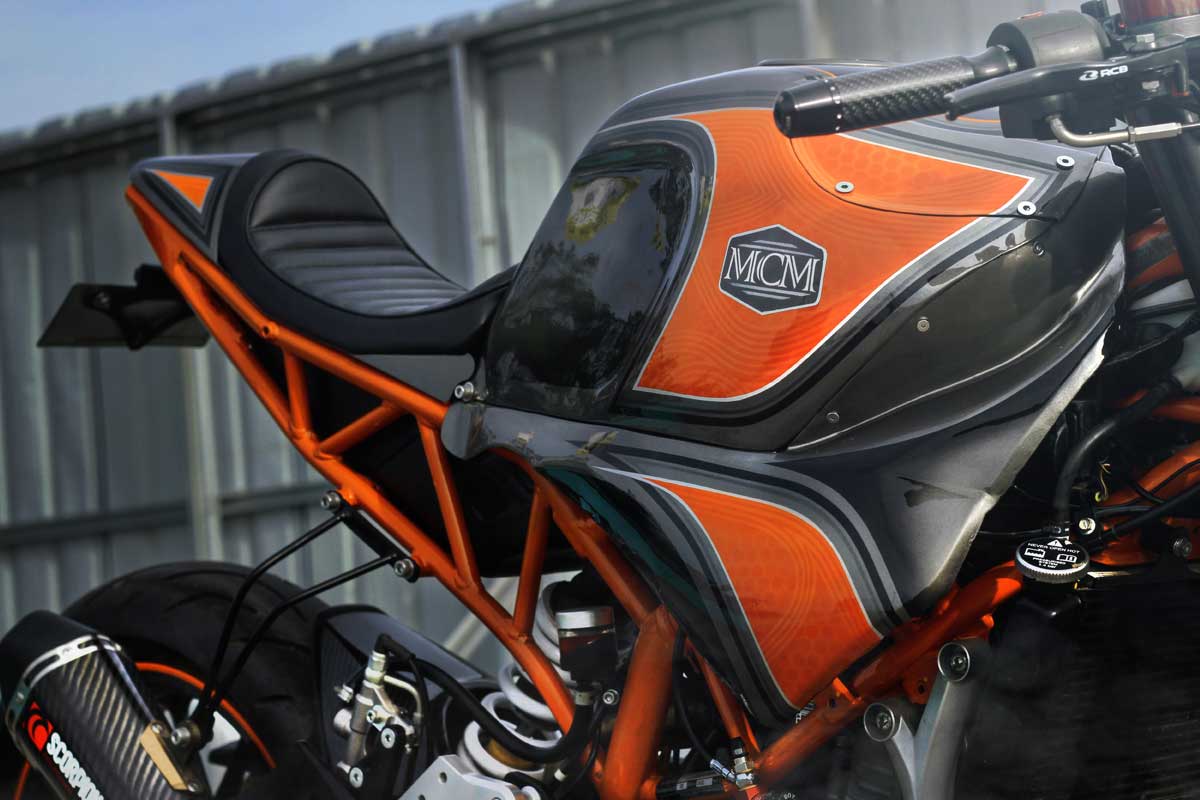 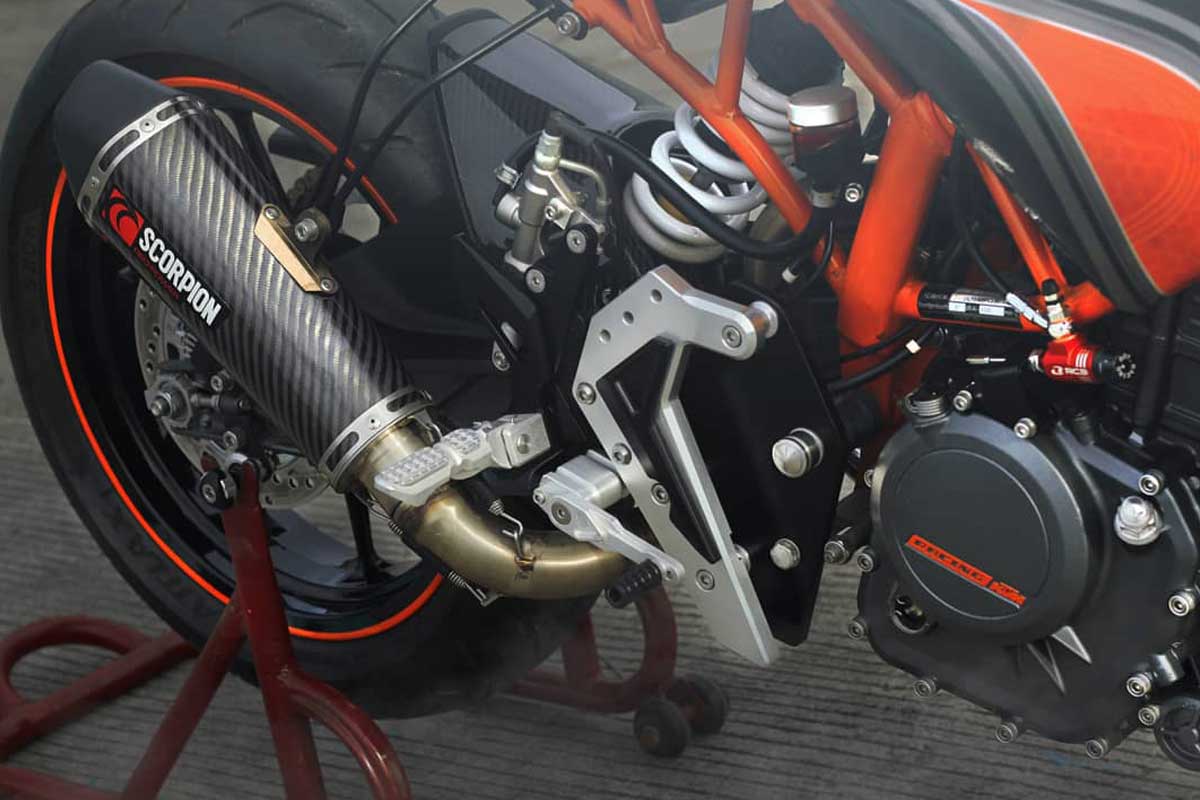 To finish things off MCM has laid a bespoke paint scheme based on KTM’s iconic colour palette. Pinstriped panels of orange and airbrushed effects give the bike a touch of 60s style. For a holistic finish, a metallic grey base was chosen that matched the colour of the RC 250 four-stroke single. The result from MCM’s efforts is a KTM cafe racer that would look right at home alongside modern classics like Ducati’s Scrambler and Suzuki’s SV650X. KTM if you’re listening, please follow Minority Custom Motorcycle’s lead. 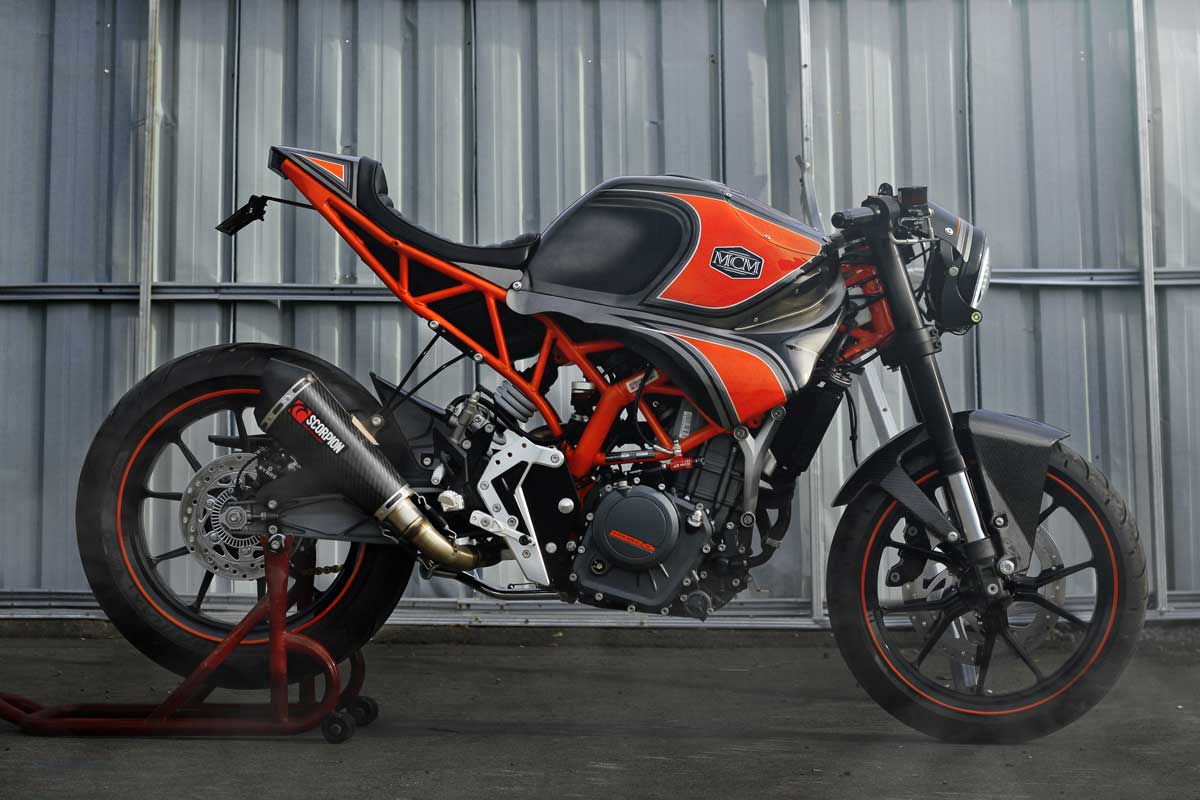