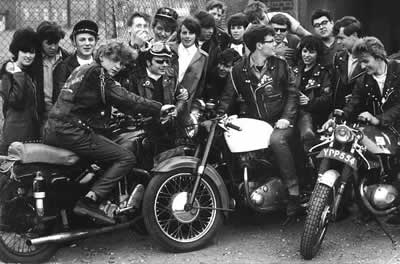 Built in 1938 the Ace Cafe developed into one of the most iconic landmarks in motorcycling history. Beginning life as a humble roadside cafe Ace’s two stand out features were it’s location, right alongside one of Britain’s fastest major road networks and it’s opening times, 24 hours a day. As its popularity grew among motorcyclists and the Cafe Racer trend developed the Ace Cafe became the place to go for any enthusiast. Teams of riders would gather and listen to Rock and Roll music with their girls before screaming off into the night to race around a course and return before a song on the jukebox could end.

In 1969 The Ace Cafe closed its doors after the development of the motorway network. Motorcycle manufacturers were struggling with the increased price of production while the market for cars boomed. With the iconic Ace Cafe closed the spirit of the Cafe Racers lived on even though other popular cultures had stolen the rockers limelight.

In 1993 the first Ace reunion was held at the site of the original cafe. Now over 12,000 people attend each year. But not stopping there the Ace Cafe would become the site numerous motorbike and car shows the year-round, almost like a homage to its unique past.

Then in 2001 Mark Wilsmore gained the go-ahead to reopen the cafe’s doors. Now 5 years on the Cafe is host to regular events ranging from live gigs to show and shines, cruise meets or even weddings.

The Deus Temple of Enthusiasm Bali

My simple account of the Ace Cafe’s history can’t do it as much justice as a visit to their website can do. If you live in the UK and you’re a bike fan of any sort pay them a visit and check out their historic photo gallery. It’ll get you all pumped for the ride back home.