Sena opened its doors in 1998 and since then has become a mainstay of the motorcycle communications game. They are known for their sleek, stylish designs and almost universal fitment. Their Bluetooth systems have helped revolutionise how riders communicate with pillions and with one another. A few years ago Sena released the 30 Series which was the first in their product line to feature Mesh Communication. Mesh goes above and beyond standard Bluetooth connections as it allows riders to drop in and out range without having to stop and reconnect. Fast forward to today and they have released the Mesh 2.0 enabled 50 Series.

I’ve been using Sena comms for a few years, my previous unit being an old SMH10R. The 10R is Sena’s lowest profile product and for Sport or Street riders, it works decently. Well, it works as you would expect a 5-year-old piece of tech to work. It’s a bit slow and the range and connection strength are limited. That said, for a comms unit not even running Bluetooth 4.0 it does surprisingly well. At least that’s what I thought until the 50R arrived. 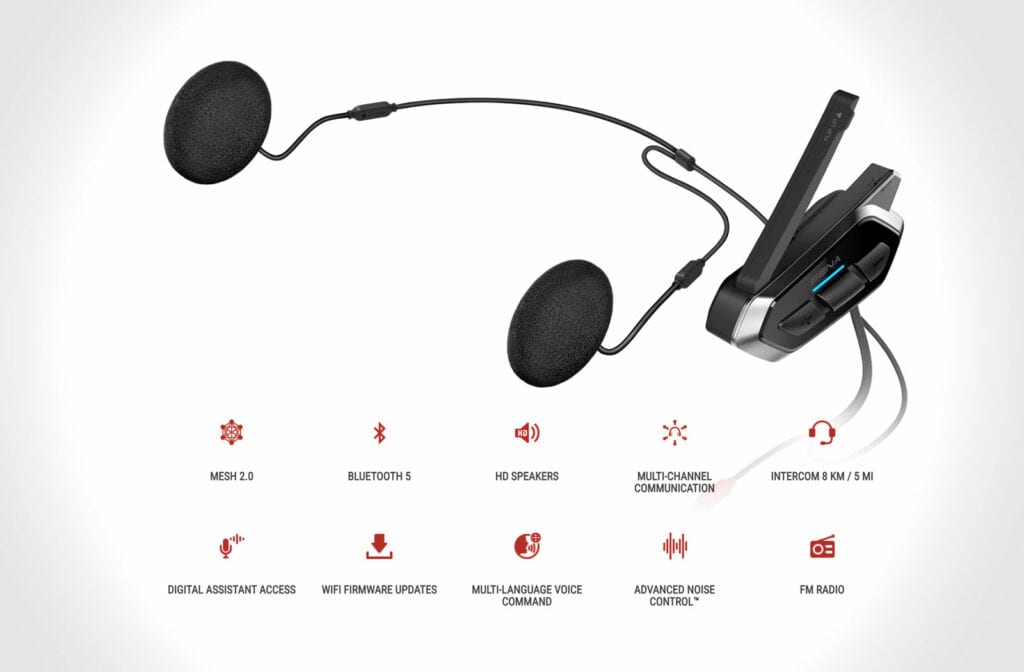 Before you open the box of the Sena 50R you know you’re in for a treat. The Apple-esque packaging builds anticipation as you remove the lid, rewarding you with the contents. The 50 Series is Sena’s newest premium product and it definitely shows. Although the casing is plastic it looks like brushed metal and black glass and there is a satisfying heft to the 50R, even though it only weighs 65 grams.

The battery is inside the main unit so all I had to do was install the speakers and run the microphone wire inside the chin bar of my helmet. The lid I chose to install the 50R in was my Shoei GT-Air. The GT-Air is a touring-spec helmet and was designed with comms in mind so installation was a breeze. If you don’t have speaker recesses in your helmet you may struggle with making room for the new Sena HD Speakers. They are a lot bigger than the previous models, but more on that later.

Included in the box were several mounting options. You can choose between a clamp mount, sticky mount or velcro mount. I went with the clamp mount because it was sturdy, non-permanent and I figured that I could easily swap the 50R between my helmets. My buddy Harley chose the velcro mount for his AGV X3000 and it too went on easily. However, I did run into a small drama when I went to install the speakers in my new Shoei Glamster. Shoei’s latest retro offering is a very slim, form-fitting package. Because of this, I had trouble fitting the speakers in without them being smushed right up against my ears. That got annoying quite quickly so I purchased an additional Sena earbud adaptor. Using earbuds instead of speakers is a great option for people who love their audio quality and don’t mind it being a bit more fiddly. Which, undoubtedly, it is. 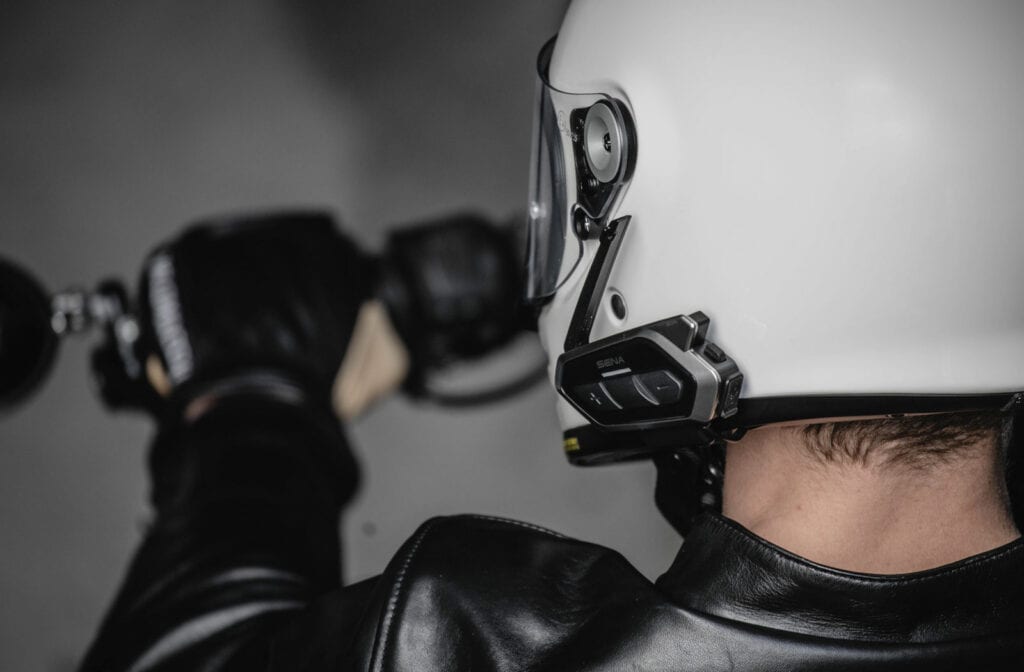 To coincide with the arrival of our 50R kit we planned a 3 day ride with a group of friends. We aimed to be riding upwards of 8 hours a day so it was the perfect testing ground for the 50R. The night before, Harley and I sat at his dining room table to get the Senas hooked up, fully charged and ready to go.

The new app-based Sena 50 Utility connection system was a bit of a struggle at first. Coming from their older system (connecting using a series of button presses on the unit) to the app was probably why we had a few initial dramas. First, they would connect, then drop out, then we would connect again, etc. There was a bit of head shaking so before we got too riled up we called it a night. The next morning, we decided to not use the app but to go back to the old way. I don’t know what we did but they connected straight away in Open Mesh and we were able to create a private Group Mesh. Once we’d locked into the private group it was all systems go. Thankfully we didn’t have a single connection problem for the rest of the trip.

On the open road, we quickly noticed just how good the audio quality was. It’s night and day compared to the SMH10R. The new HD Speakers are considerably bigger so this is where the quality is coming from. At 110km/h and with earplugs in I could still hear Harley speaking clearly. My helmet is “quieter” than most so others may see different results. When the speed and wind picked up the audio did drop off but for legal highway speeds it was good. Up to 80km/h where the wind is less of a factor, however, it’s downright incredible. The new speakers deliver crisp trebles with a good mix of bass, perfect for vocals. I did put on a podcast to test it further but the results weren’t as good. As for music quality, although it was greatly improved over the SMH10R, it was still nothing to write home about. This is to be expected, as although the speakers are a lot bigger you still shouldn’t compare them to noise-cancelling headphones. Apples to oranges. Baked into the unit is Sena’s Advanced Noise Control feature. It’s hard to tell when this is actually working but I’m sure it is a positive addition with the increased audio quality. 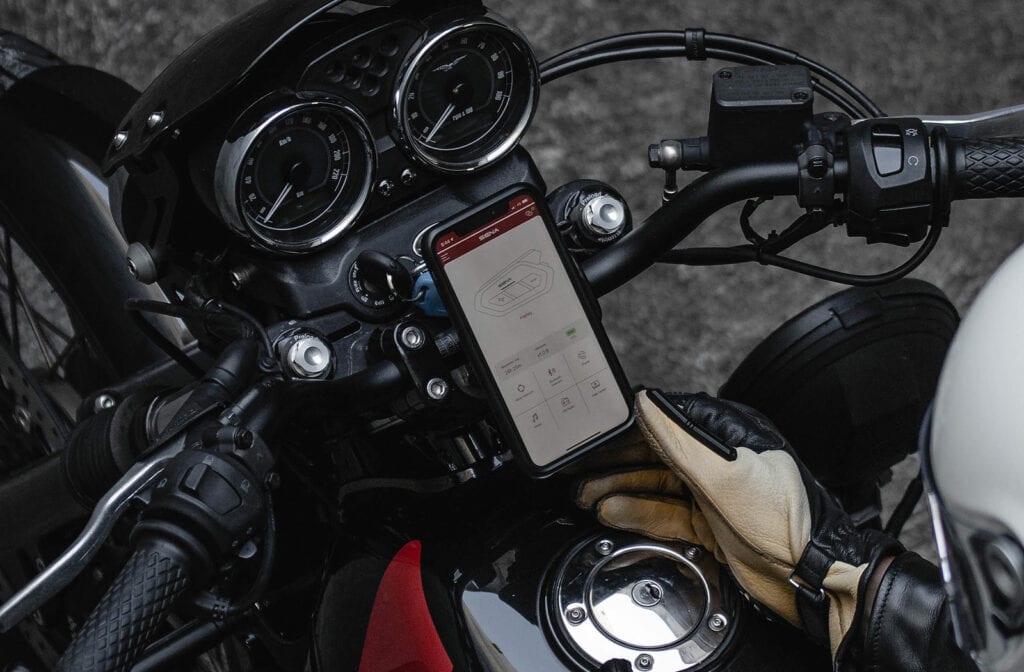 During my testing, I connected to another Sena 50R, a 20S, a 30K and a Schuberth Sena. Surprisingly, the best audio quality after the 50R came from the Schuberth Sena. The connection was a breeze and I was blown away by how good the audio was from a non-50 Series unit. The 20S and the 30K however, were a different story. I don’t know what it was but the units would constantly disconnect and the range was downright appalling. Mind you, I was in the middle of the bush on my trail bike with trees, hills and rocks in the way. This definitely had an effect on the connection strength.

This was in stark contrast to the connection strength with the other 50R. As long as I could see Harley, I could speak to him. We would’ve got close to the 2km range during our trip down south. We were running them in Mesh Intercom mode so the units would simply disconnect and reconnect seamlessly as soon as we were back in range.

The buttons on the 50R are large, tactile and easy to operate when wearing gloves. Like anything new, it does take a while to get used to where they are situated. The centre button is multifunction, depending on how long you hold it down for. Flanking the centre button are the volume buttons that also change function depending on how many times you press them. It all sounds a bit hard but don’t worry, I’m making it sound far more complicated than it actually is. Once everything is set up and you’re connected it’s all worth it. 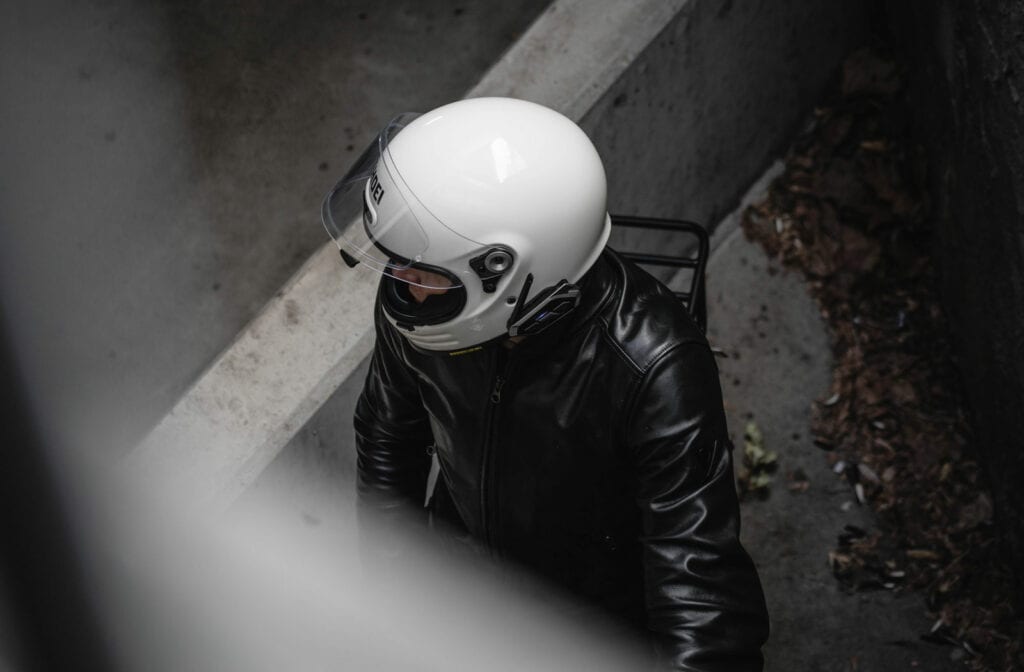 The 50R is accompanied by the 50S in Sena’s latest lineup. The Sena 50S is slightly bigger and features
a jog dial rather than the 3 button setup. The 50S also features an ambient mode where you can press a button and sounds from outside your helmet are piped through the speakers. The 50R doesn’t have this feature. In hindsight, it would be a very good feature to have even though the 50S is a bit bigger. Both units feature a small, pop up antenna that they say you need to use for the Mesh connection modes.

If you have multiple helmets I would recommend getting the 50S. The clamp system is far superior to the 50R mounting options and allows you to swap the unit between lids in seconds, rather than minutes. It’s a small thing but it’s worth noting.

Being smaller, the 50R also has slightly less battery life than the 50S. That said, we didn’t experience any battery issues, even after all-day use. We started each day on a full charge though, just to be sure. The new USB-C connection is a welcome upgrade over the old micro-USB input, especially as GoPro and Canon have made the same switch. One input to rule them all. The 50R also features a Fast Charge option where 20 minutes of charge will get you a further 6 hours of battery life. Not bad considering that’s shorter than most lunch breaks. 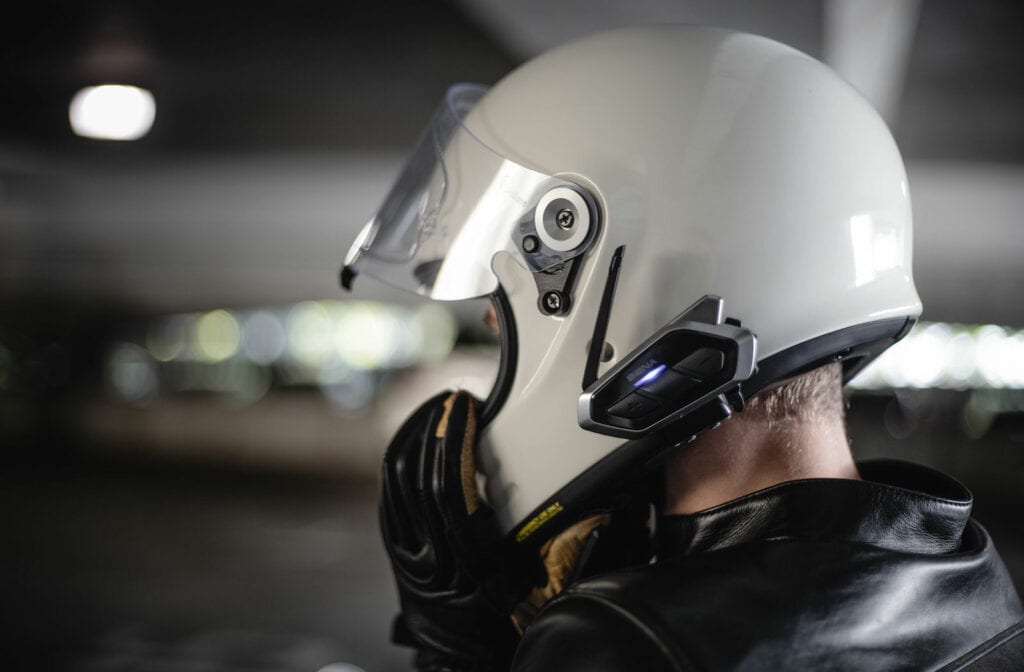 Our road trip had been progressing well. We’d ridden from Perth in Western Australia out to Windy Harbour and Point d’Entrecasteaux before heading back up to Nannup and starting the journey back home on day 3. Some of the guys were keen to get back so we started early to make good time. After a quick stop at the bottom of the Wellington Dam in Collie (to see the Worlds Biggest Dam Mural) things took a turn for the worse.

Coming around a blind left-hander, over the crest of a hill one of the guys hit a patch of very fine gravel. This resulted in the bike low siding and him hitting the ground hard. I was directly behind him and saw the whole thing, seemingly in slow motion. We were travelling along the banks of the river where the drop off to the water was very steep. It was sheer luck that he didn’t topple over the edge and down the cliff. Usually, I would resign these dramatic details to history. However, I am of the opinion that our Senas prevented a 4 bike pile-up. Thanks to the Sena I was able to alert Harley immediately so he could brake in time and avoid hitting me. With Harley breaking early the rider at the back also had time to hit the skids before it was too late. We jumped off the bikes and ran to assist our fallen comrade. It was all a bit of a blur after that!

Suffice to say, the last leg of the trip didn’t go as planned. No matter how much you plan, sometimes things happen that are out of your control (like a broken collarbone and seven broken ribs). What you can do is be as prepared as possible. We had first aid training, first aid kits, mobile phones and we all helped out, even when the ambulance arrived. Bluetooth communications are now a staple part of my riding kit because of how they helped us avoid an even bigger incident. Our story is not the only one that highlights the safety benefits of rider-to-rider communication and it certainly won’t be the last.

You could be blasting around the city with your friends and someone takes a wrong turn. You could be in the country and someone has a spill. Regardless of where you are, you should consider a Bluetooth communication system if you’re group riding.

I know some people ride motorcycles to escape technology and to unplug for a while. To them, I say what I’ve said before. Great technology, like the Sena 50R, will augment your ride and improve it. It won’t change it. Unless, of course, you’ve got mates that don’t know when to shut up.

Story and photography by Ben Pilatti 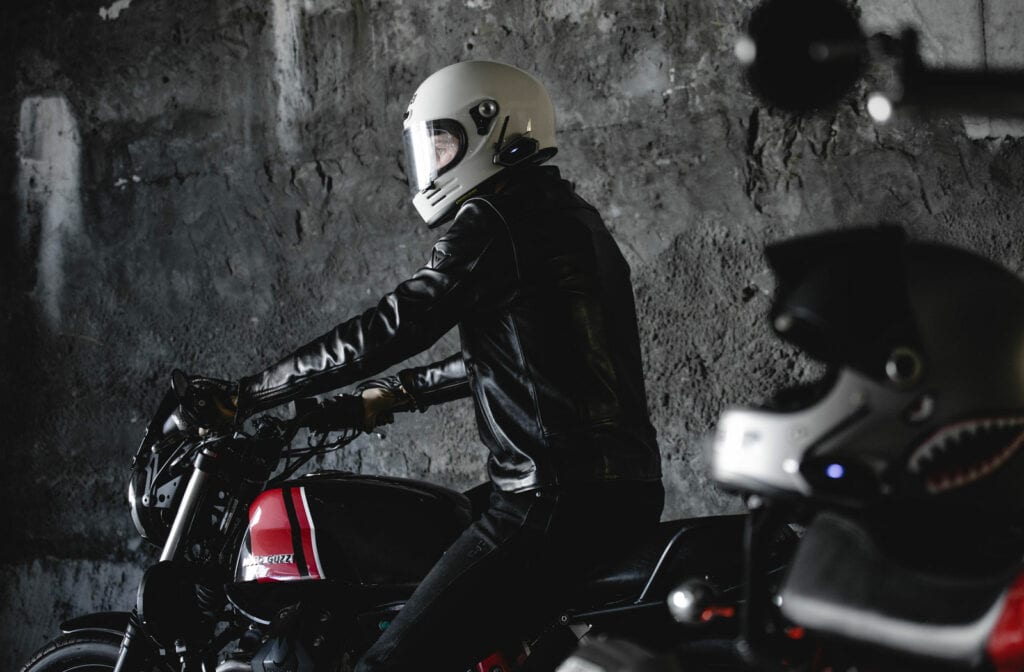