It’s been quite some time since we’ve seen a cafe racer roll out of the RSD workshop. But rest assured they haven’t lost their knack for nailing the cafe style and performance formula. Based on a 2015 MV Agusta Dragster 800RR, the more aggressive version of the Brutale, this project saw Roland Sands and his team transform the street fighter into a classic MV inspired modern cafe racer.

Commissioned by a repeat customer the RSD team were given complete freedom to interpret the cafe themed brief. “As with all our performance builds maintaining a fully functional machine and improving performance was chief in our process,” says Roland Sands. “With the MV we also set out to bring a classic aesthetic to the package in the spirit of MV racers of the past…” 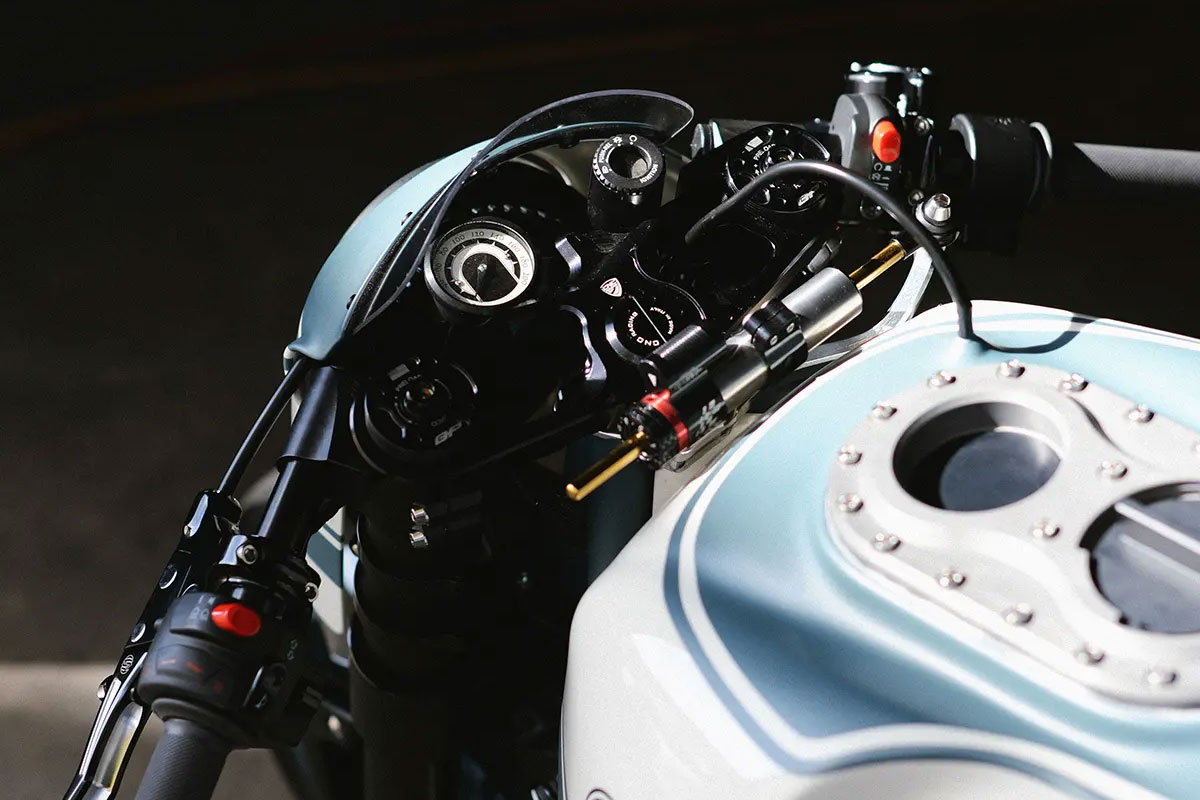 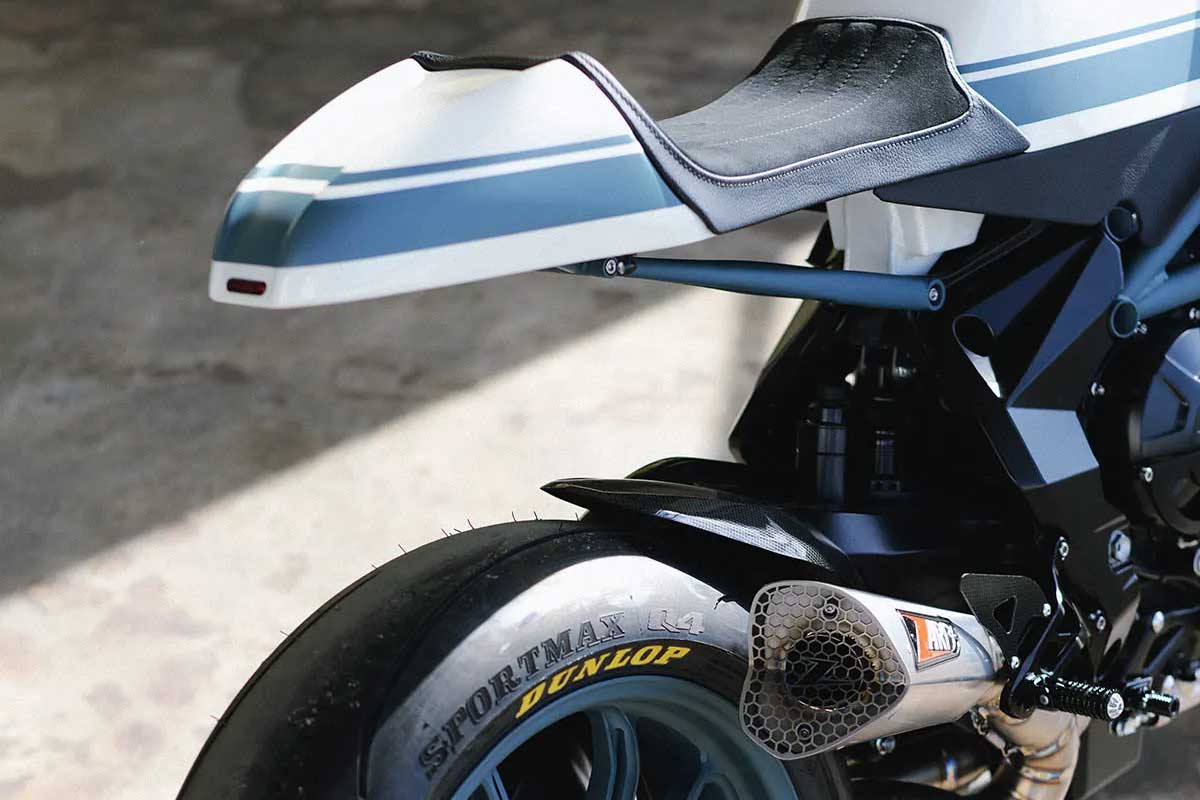 Things kicked off with revisions to the Dragster’s riding position. First, the upright handlebars were swapped for clip-ons and the factory yoke replaced by a CNC Racing triple clamp. Next, they swapped the factory foot controls for RSD components and positioned them higher for ample road clearance. To complete the revised riding geometry a custom subframe was then fabricated from tapered-chromoly tubing. As well as supporting a new tail assembly the bolt-on subframe setup a level bone line to ensure the bike had an appearance synonymous with cafe racer style.

The bespoke bodywork is all hand-formed aluminium and was inspired by MV’s legendary Grand Prix wins of the 50s, 60s and 70s. To add a touch of modern racing style the tank features a quick fill endurance racing fuel filler while the tail sports an integrated LED light strip. More modern lighting can be found on the front end in the form of an LED headlight that sits in a custom made bikini fairing. Flanking the radiator are custom made shrouds that were formed from aluminium before being reproduced in carbon fibre. To wrap up the body mods RSD called on their friend Bitchin Rich to upholster the saddle in grippy suede leather. 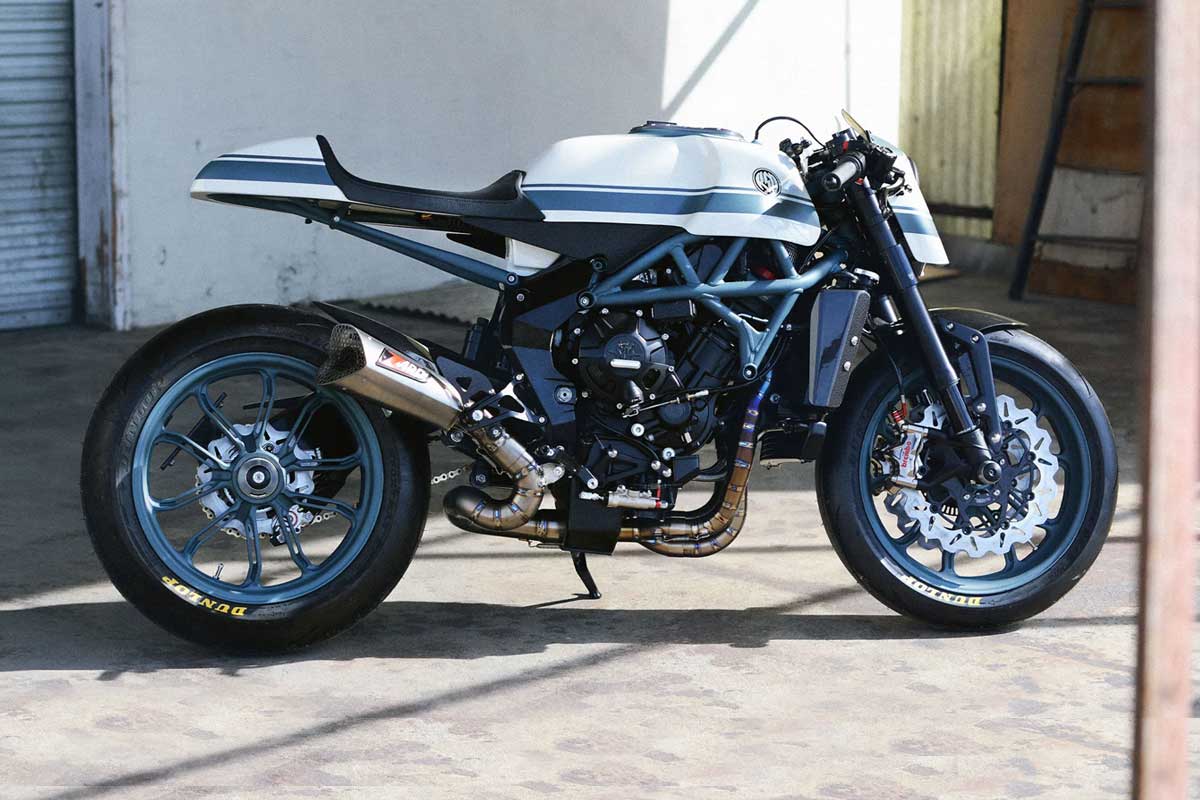 RSD is well known for its CNC expertise. Their MV Agusta Dragster is a rolling example of their ability featuring both off-the-shelf and one of a kind milled alloy components. The most notable are the bikes unique wheels. Machined from solid aluminium blocks each rim features a hub design matching the original Dragster wheels. This not only made installation a breeze but also allowed them to retain the Dragster’s sexy single-sided swingarm. To finish the wheel package off RSD painted the rims in a Cerakote “Blue Titanium H-185” ceramic paint and wrapped each one in sticky Dunlop Sportmax Q4 rubber. 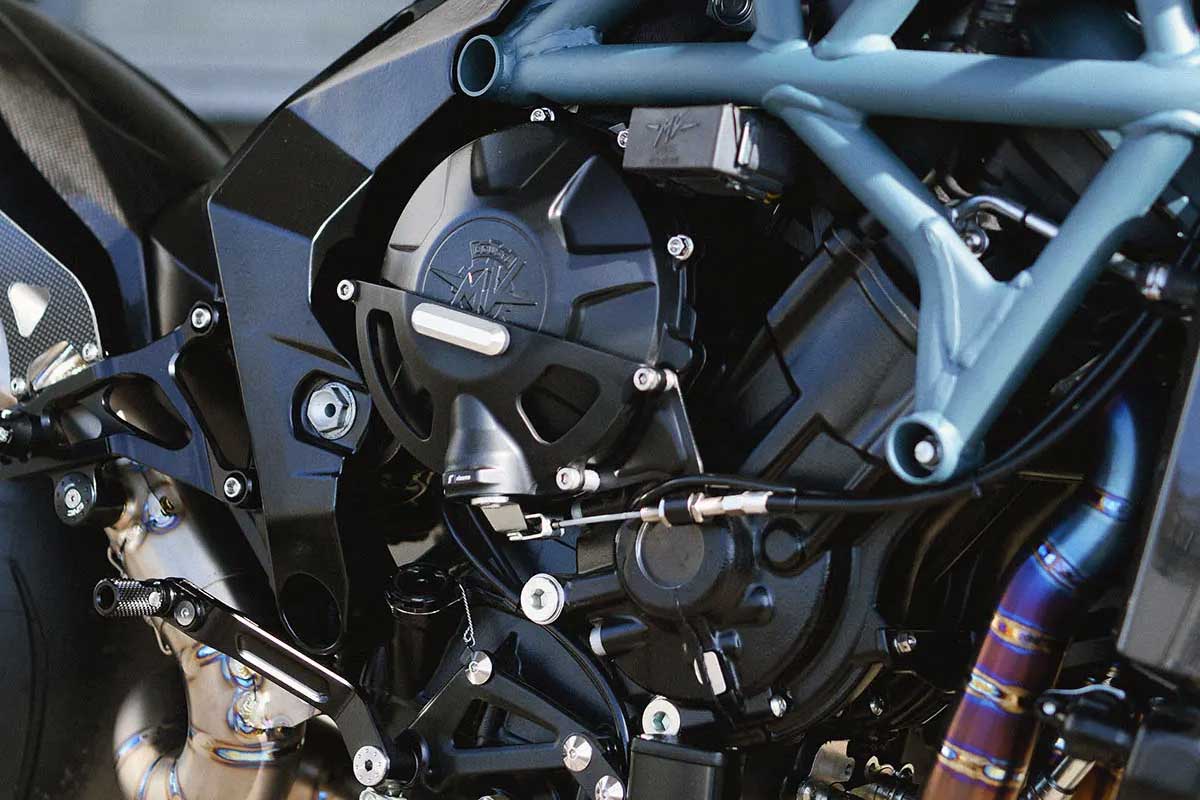 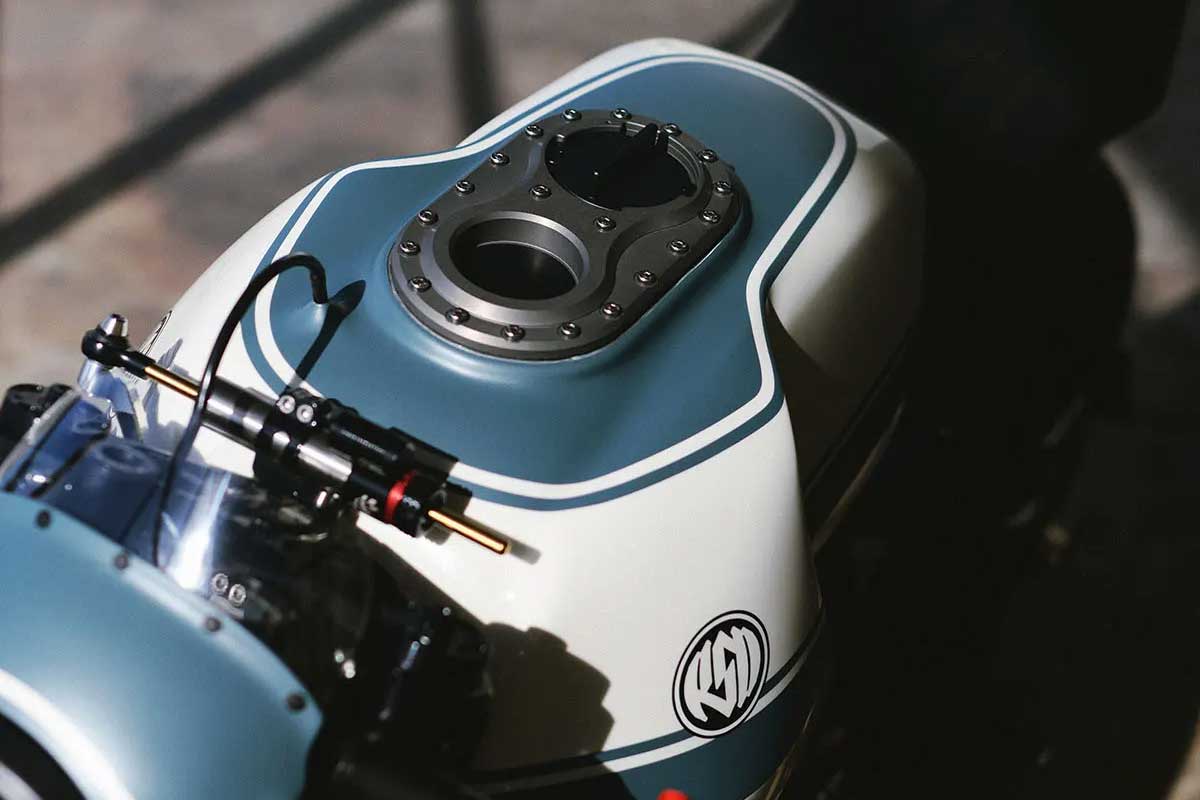 Back in 2015, at the time of this bikes release, all of the naked models in MV’s lineup featured an excellent chassis design that brought them success in the World Supersport Series. To take full advantage of the design they created the higher-powered MV Agusta Dragster 800RR. Based on their 798cc liquid-cooled triple the 800RR had a 15bhp increase over the standard Dragster along with a lighter set of adjustable Marzocchi forks, an adjustable Sachs shock and a purposeful steering damper. RSDs roots are firmly planted in racing so despite all MV’s efforts this RR was always destined for a few more performance improvements. 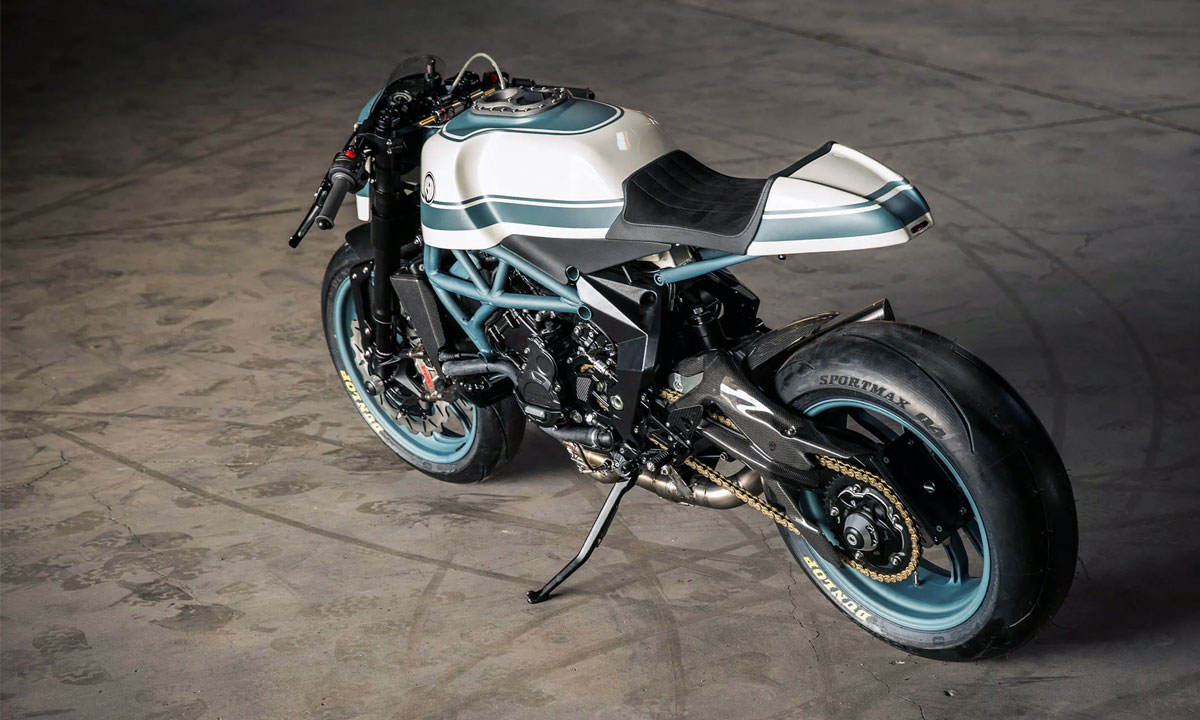 “This is one of the coolest cafe racers we’ve ever built, this special MV Agusta Dragster was made to eat asphalt and look good doing it!” – RSD Designs

With a significant reduction in both unsprung and overall weight, the MV Agusta was already outperforming its former self. But to give their Dragster cafe racer a real boost in power it received a complete Zard exhaust system designed and built especially for this project. Next, they optimised the bikes handling to suit the changes in weight distribution. GP suspension rebuilt the front end as well as blacking them out to tie in with the new colour palette. Extra grunt necessitates extra stopping ower so the MV also benefits from front and rear Brembo nickel GP racing callipers and RSD radial masters.

There’s no question as to whether the RSD team is happy with how their latest cafe racer project turned out. In fact, they’re so pleased they are even selling a limited edition t-shirt featuring the bike on their website. I know I’d prefer to own the bike over the tee, but I expect the chance of its owner giving it up now are slim to none. 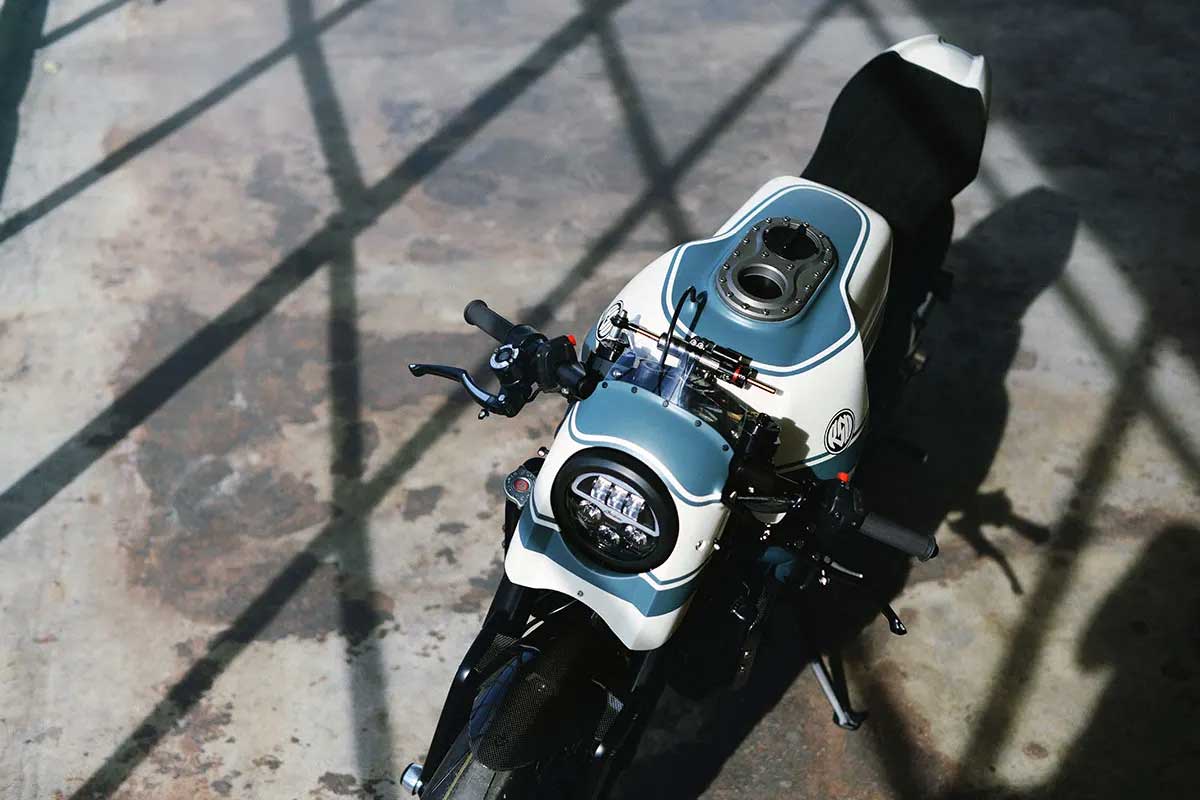