Royal Enfield has been making waves in the custom scene since the release of their 650 twins. They’ve collaborated with custom workshops and hosted several of their own dealership build offs around the globe.  What makes these bikes great as a basis for customization is that they’re amazingly well priced and how well they respond to modifications. So far Royal Enfield hasn’t offered much in the way of their own aftermarket parts to personalize these bikes. Thankfully a few enterprising workshops are stepping up to satisfy the demand. This Royal Enfield 650 Twin wears a cafe racer body kit developed by India’s Autologue Design. 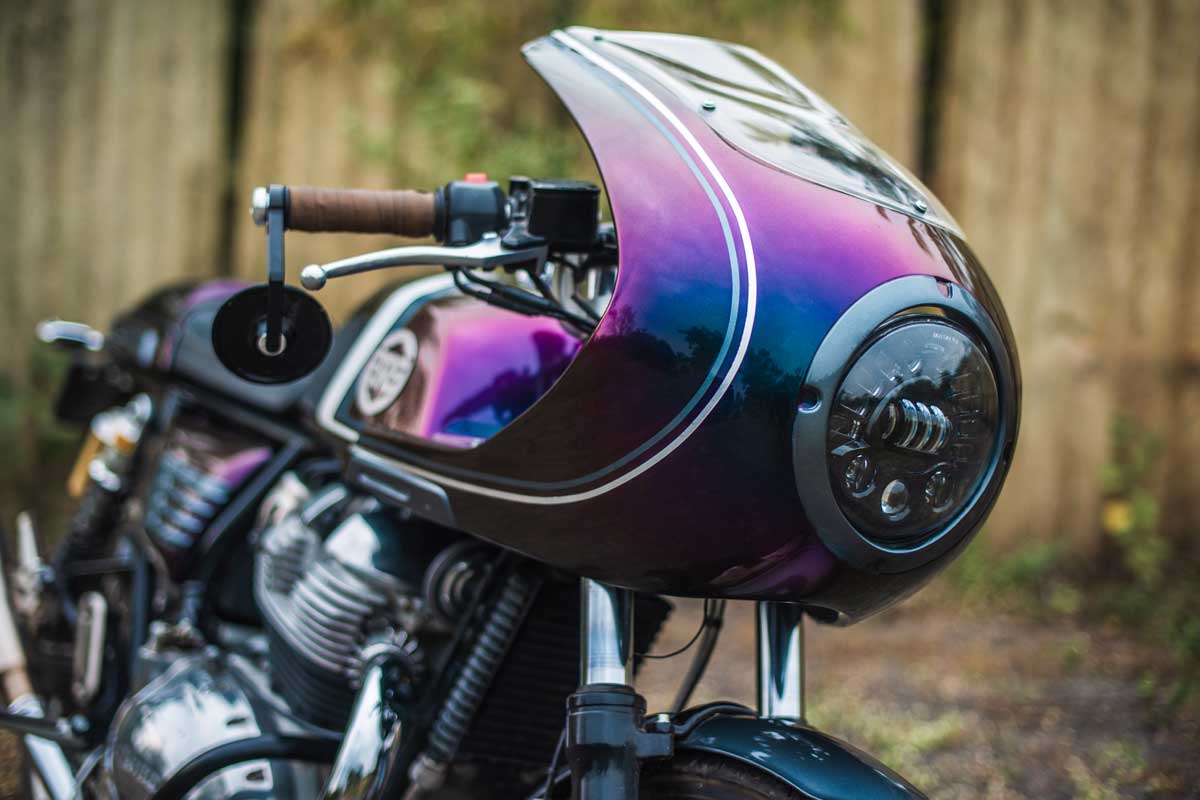 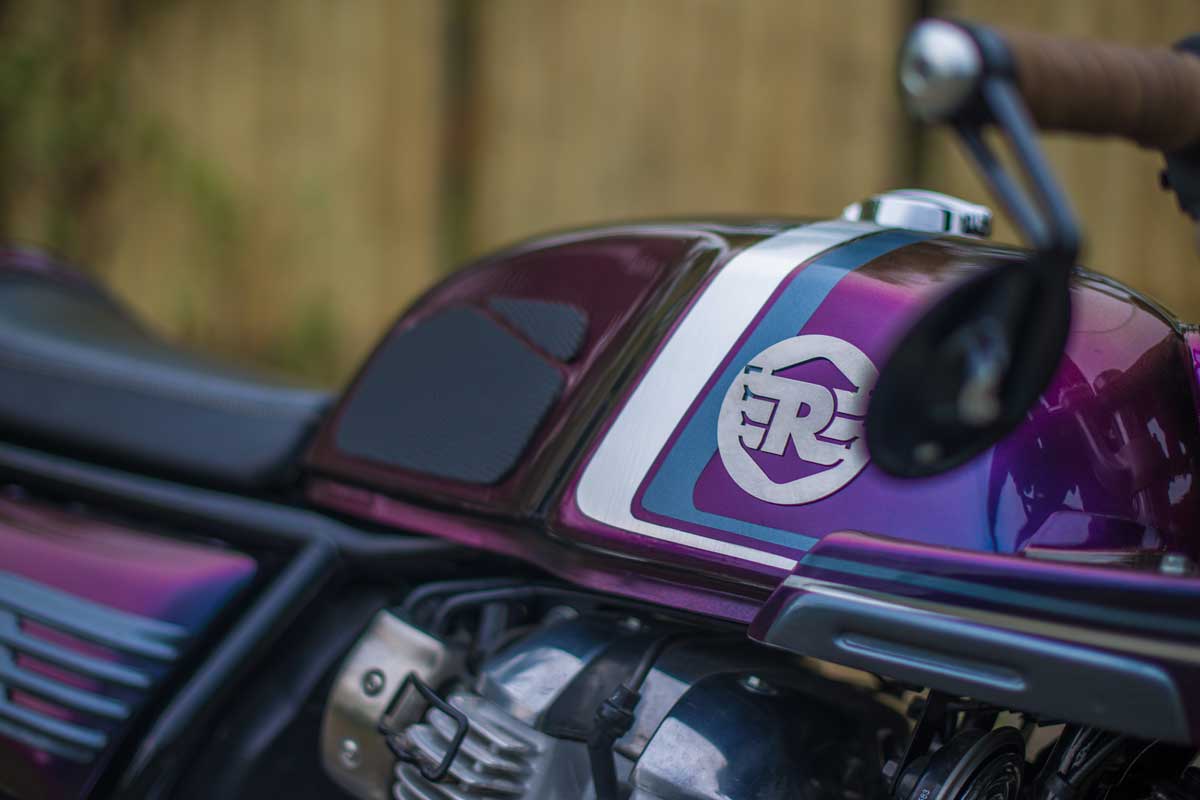 Since 2013 Autologue Design has produced bolt-on conversion kits for many of India’s popular motorcycles, but this is their first venture into Enfield territory. Their bolt-on Royal Enfield 650 cafe racer body kit is aptly named RECK, an acronym of Royal Enfield Cafe Kit. The bike in these shots is the companies proof of concept and testbed for the 2nd generation of the RECK body kit and was debuted at the Royal Enfield Rider Mania event earlier this year.

“Our kits are developed completely in 3D.” explains Autologue’s Mukul Nanda. “We start by scanning the bike then modeling in 3D, 3D printing test parts and finally molding. This leaves little room for error.” Autologue isn’t ashamed to admit that their kit was heavily influenced by a motorcycle that they consider to be the pinnacle of modern-retro design, the Triumph Thruxton. The similarities are undeniable, but the Autlogue kit still manages to hold it’s own. 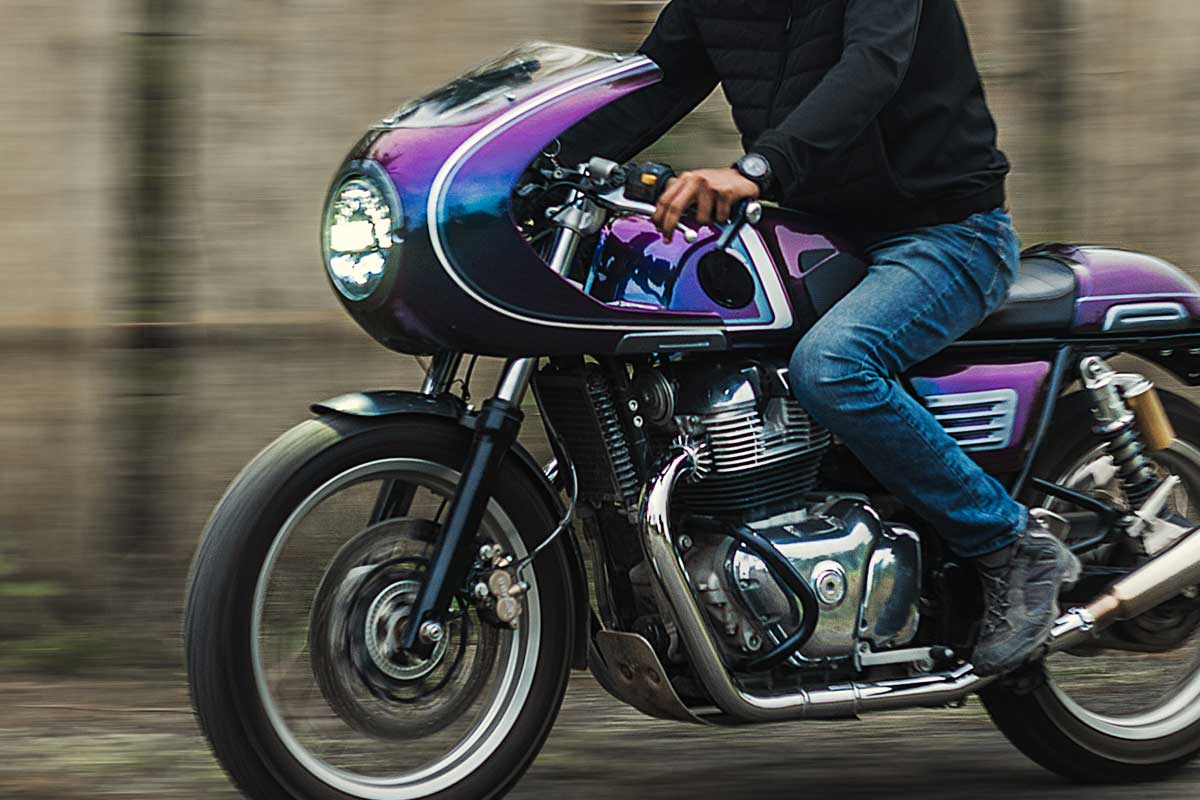 The RECK 2 kit consists of 2 main components, a front fairing, and rear cowl, and comes with all the hardware required to fit them. The front quarter fairing is installed using the standard GT 650 twin controls and handlebars and includes a vacuum molded windscreen. The removable rear cowl adapts directly to the existing subframe, covering both the rear of the seat and the unsightly protruding frame loop that Enfield’s own cowl design leaves exposed. Both components offer factory levels of fit and finish and emphasize the GT’s beautifully balanced bone line. All mounting hardware is laser cut from stainless steel including a headlight relocation bracket. 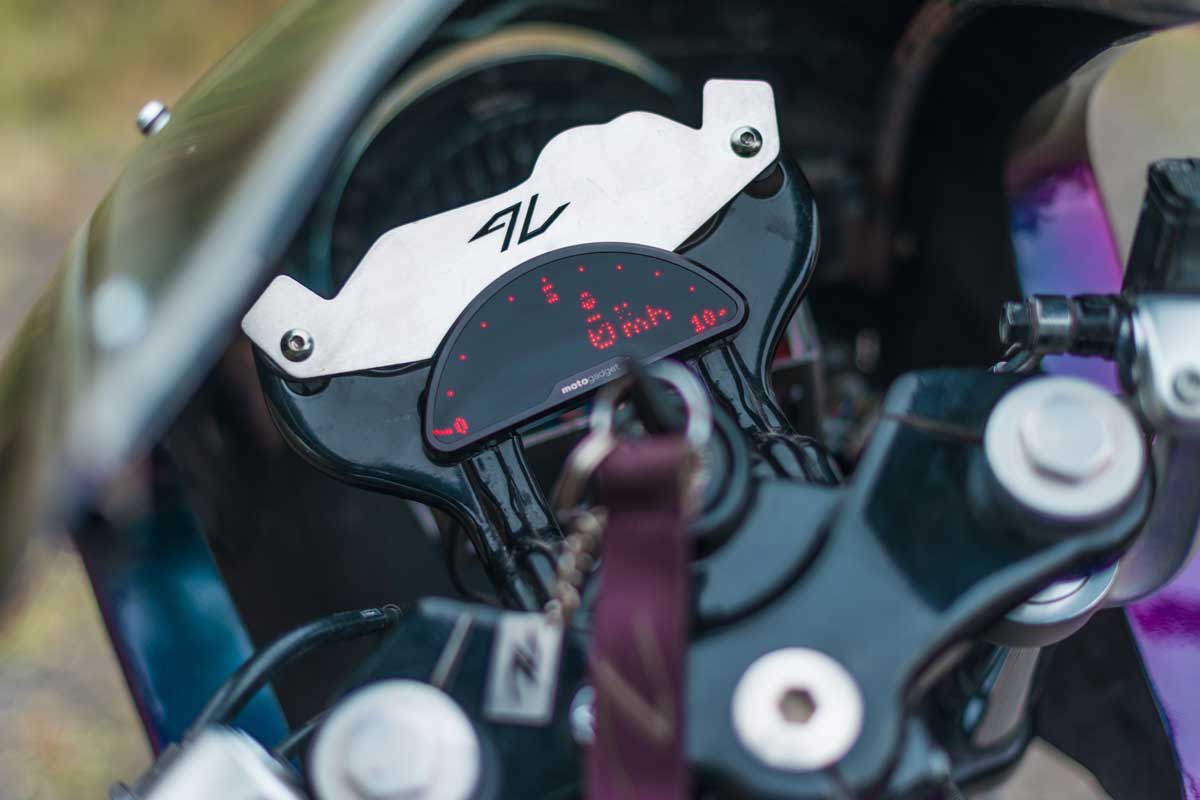 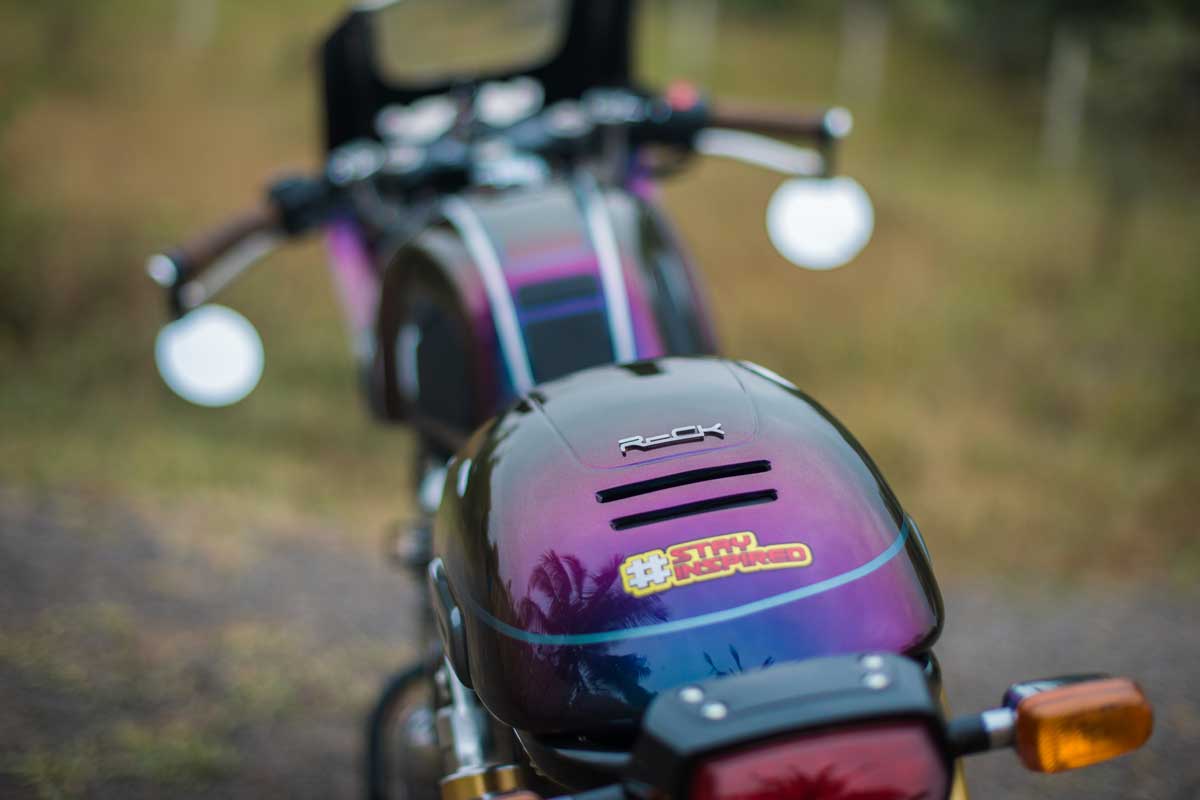 To demonstrate how owners can further develop their own GT 650 cafe racer projects, Mukul and his team made additional tweaks to their demo bike. The Autologue RECK GT 650 wears a spattering of other aftermarket components including a Motogadget Motoscope Pro gauge and M.view mirrors. Keeping the front end streamlined is an LED headlamp with integrated indicators. Then at the rear, the GT tail light has made way for a Royal Enfield Himalayan equivalent. Autologue also 3D printed bespoke finned covers for the factory side panels which can be purchased separately to the kit. Then to finish things off they painted the bike using striking hyper shift paint with custom pinstriping and laser-cut tank badges.

At around $200 USD for the body kit, it’s an incredibly affordable way to quickly transform a Royal Enfield 650 into a much more aggressive-looking cafe racer. During the Royal Enfield Rider Mania show, Autologue offered 25 kits for pre-order which unsurprisingly sold out fast. RECK 2 is now available to purchase through the Autologue online store. Let’s hope they can keep up with demand. 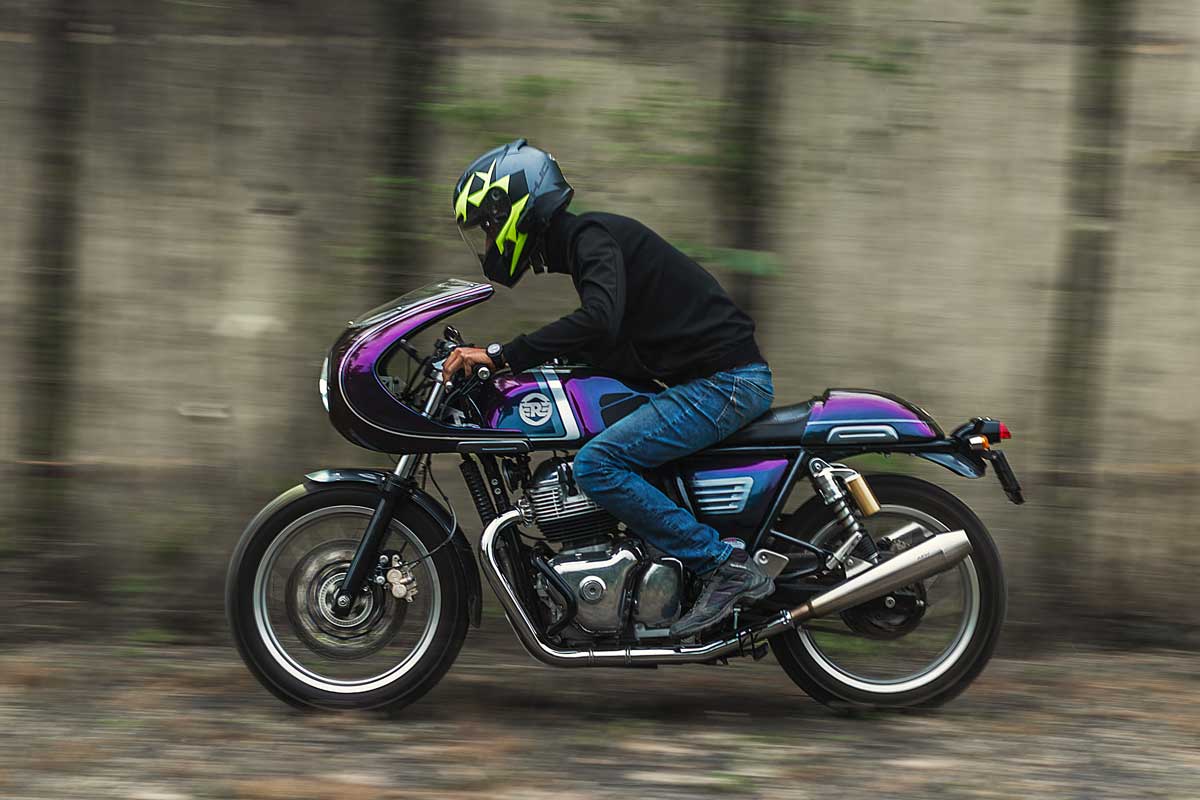 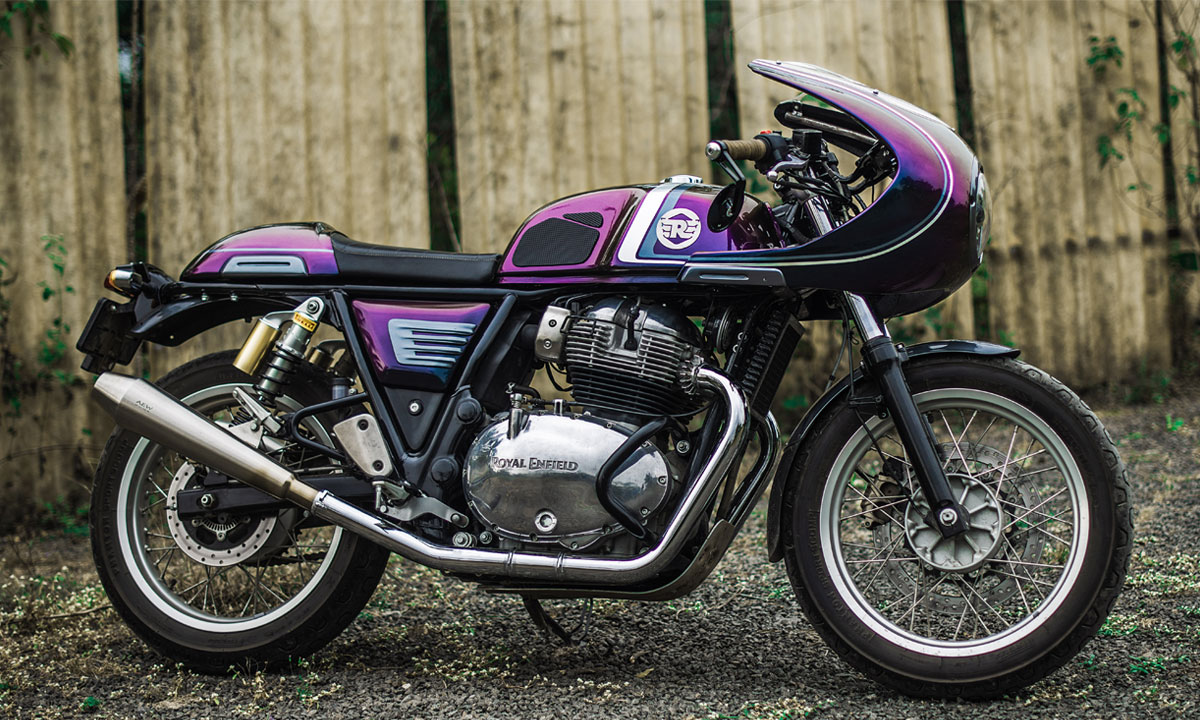 Under Pressure – Project RE Continental GT 650