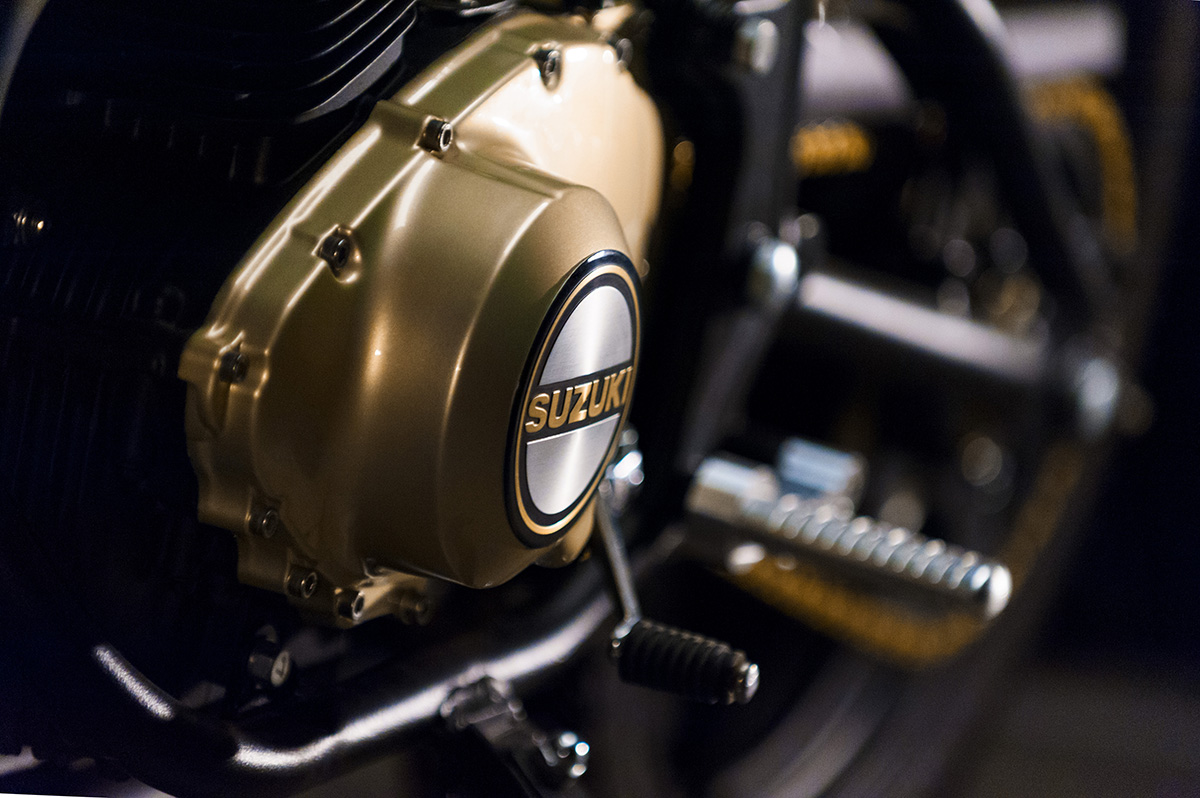 “Our concept was to build a retro-styled bike with modern elements and a comfortable riding position for everyday use. C-Racer is a design and manufacturing company of custom motorcycle parts, specializing in café racers, scramblers and flat tracks and was established in 2008. Using our own partson custom bike builds has been a side project of our for some time and this bike presented us with the opportunity.

The GSX250 is a small stature, small capacity bike and since we were about to strip it down, it would be getting even smaller. After careful consideration, we decided that our SCR3 universal seat and the URFF2S fenders would be appropriate for the bike. Its fuel tank is a real beauty and it dominates the bike’s appearance, so we thought we’d keep it in order to balance the loss of mass in other areas. For it to work with our concept though we changed the fuel tank’s angle by lifting its rear end by 2cm to match the bone line of the frame.” 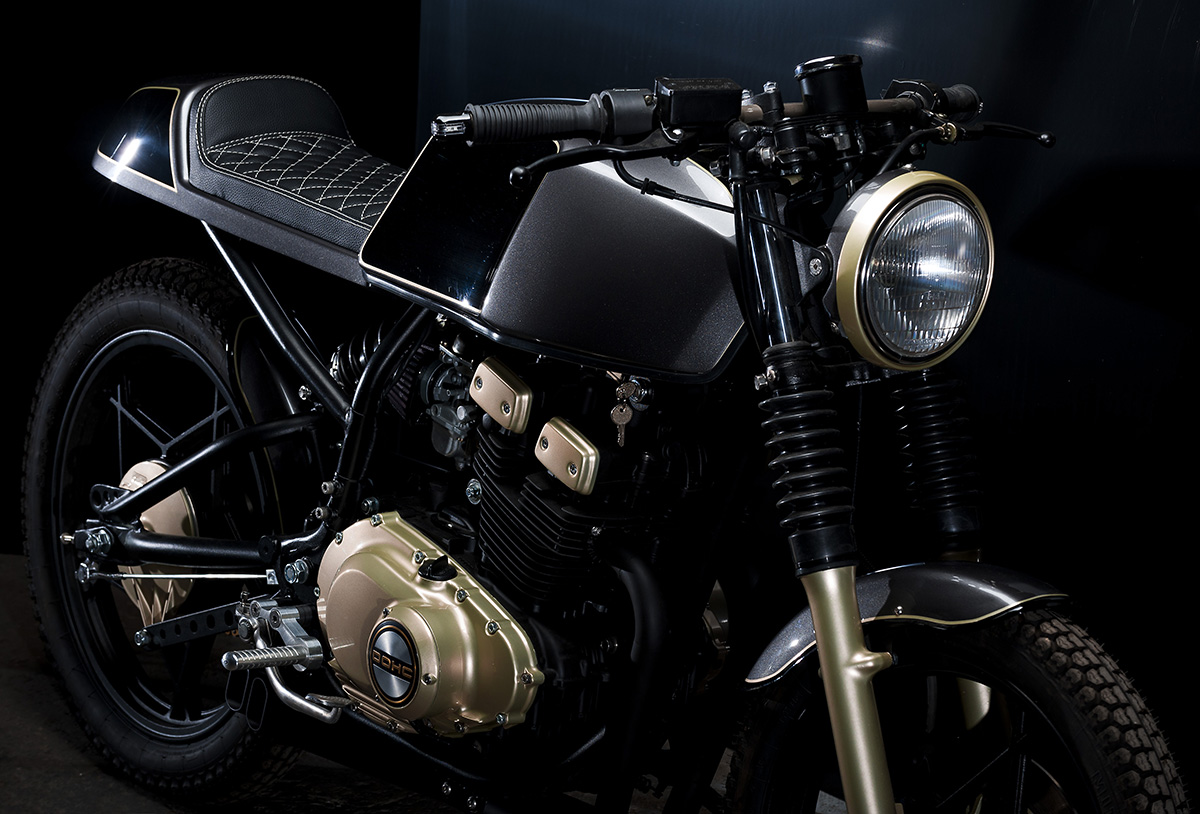 “The rear of the frame has been cut off, rebuilt and welded to fit our seat, matching the fuel tank’s lines perfectly. All the electrical components, including the Motobatt Quadflex battery are now hidden within the cowl and beneath the seat. An air vent has also been installed beneath the seat on the sub-frame for improved regulator cooling. The headlight brackets have been cut off and customized to position the headlight closer to the forks and a new ignition key has been positioned beneath the fuel tank in order to achieve a minimal instrument cluster. To mount our speedometer and rear set footpegs we machined stainless steel brackets. The fork brace from the stock front fender holds the new fender in place and a handcrafted bracket has been added to hold the rear drum brake. We also mounted a Yamaha FZ1 handlebar which had been lying around our store. As for the wheels, we decided to keep the original ones and picked the HO3 Mita’s 1930’s classic tread tyres.” 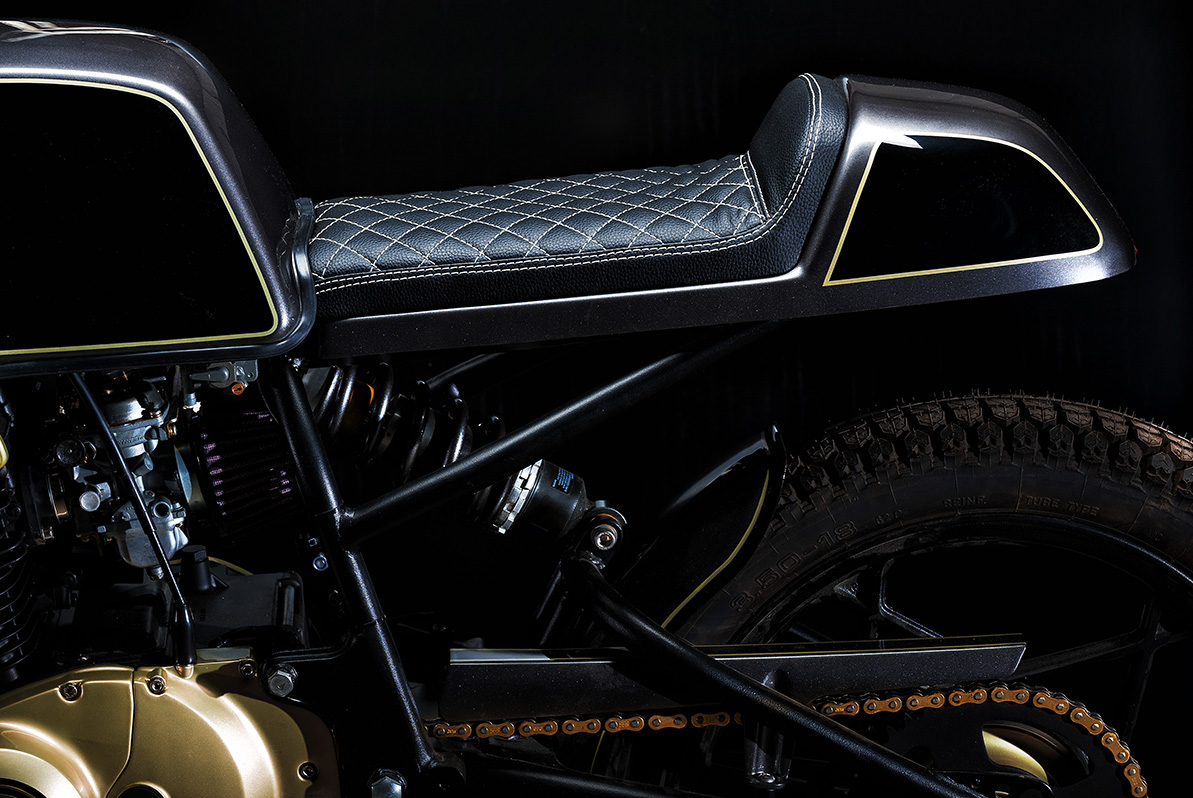 “The main modern modification has been the twin to mono-shock conversion. To do this we reinforced the swing arm from an Aprilia Tuono 1000 and affixed the hugger fender and chain guard from a Ducati Monster 620 for practicality.

After almost 2 years of being exposed to the weather and corrosion from sea spray we pretty much had to replace everything that showed signs of wear. The motor, carbs and fork tubes had been punished by mother nature. We had to dismantle all of them and rebuild them. The stock air filter was replaced with oval profile filters and our custom made exhaust and the silencer proved rather tricky to construct. Since we didn’t want to use an aftermarket muffler we spent many hours on how it should be done and ended up with this unique design. Once we were done with the exhaust and had tuned the carb the bike was ready for a ride. Initially the sound was loud but bearable, however after 3000rpm it became difficult to bear. We went back to the garage and made custom silencers and headed out for a second test. The sound was perfect, but the increase in the back pressure necessitated another carb adjustment. Finally after 1 week of trial and error our exhaust adventure was over.” 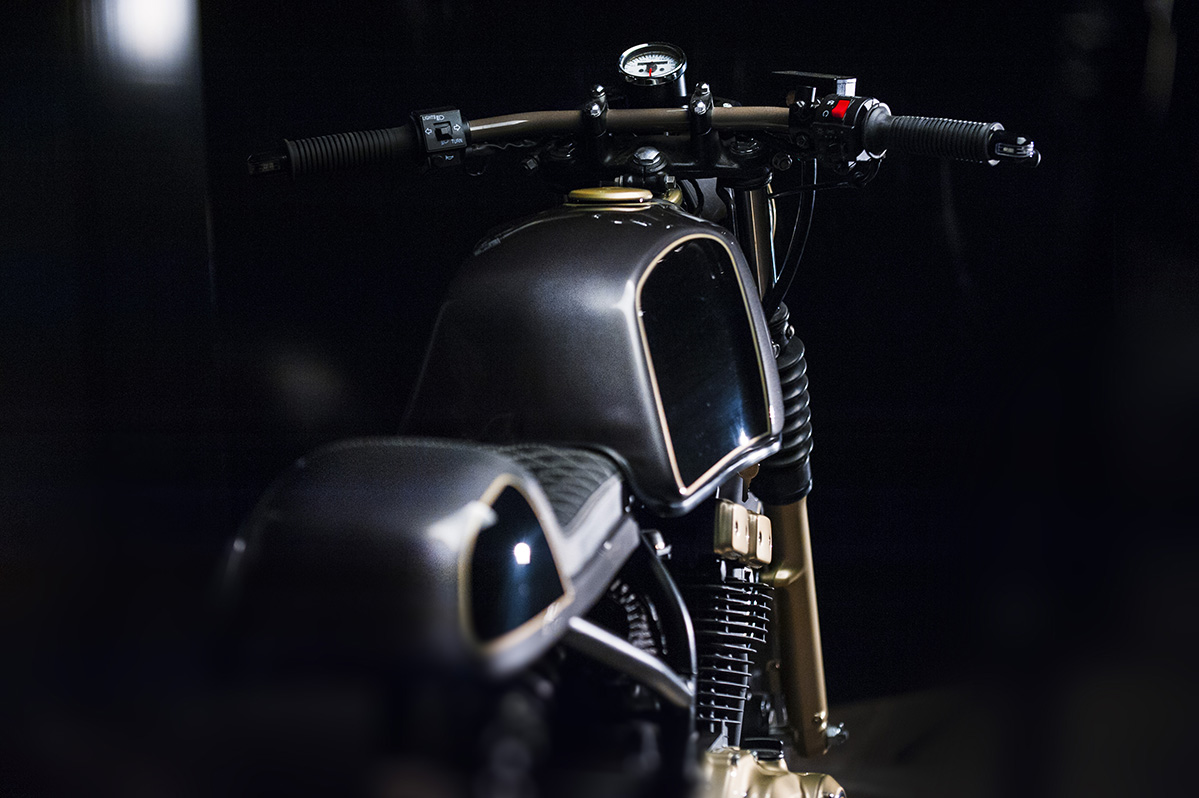 “After numerous disagreements within the team concerning the paint job, we ended up picking the final color completely by chance….black with champagne gold details. The frame, brackets, wheels etc. were sandblasted and electrostatic paint was applied. The Motor was also painted with gold Suzuki decals on each side.” 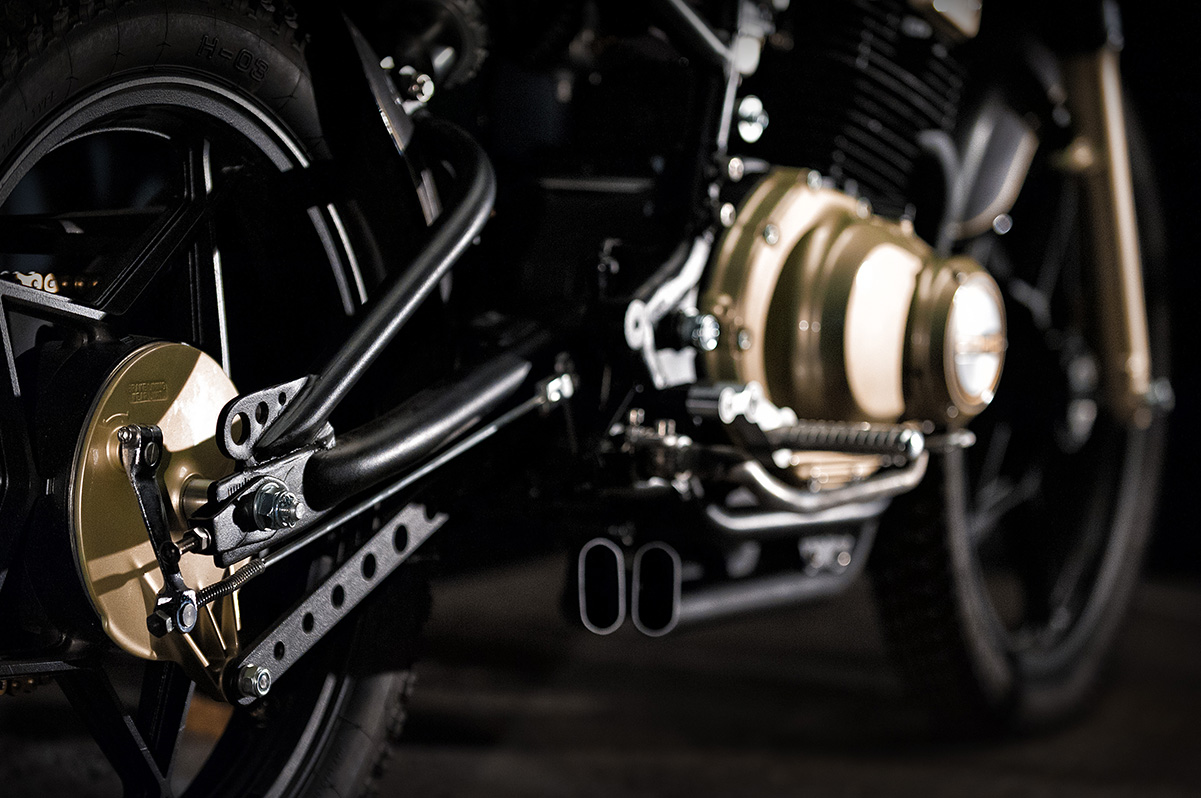 “The paint ended up being the reason for the bikes name…Sugar Kane. Two days before it was finished, one of our team members, Christos, had been watching the movie “Some like it hot” (1959), starring Marilyn Monroe as Sugar Kane Kowalczyk. After seeing the image of Marilyn in a black dress he instantly thought it was a fitting name for our GSX cafe racer.

In a city like Athens reasonable power and agility are motorcycle essentials. Our Suzuki GSX250 handles the task with ease and is made even better by our handling upgrades.”

Photography by A Dead Pixel 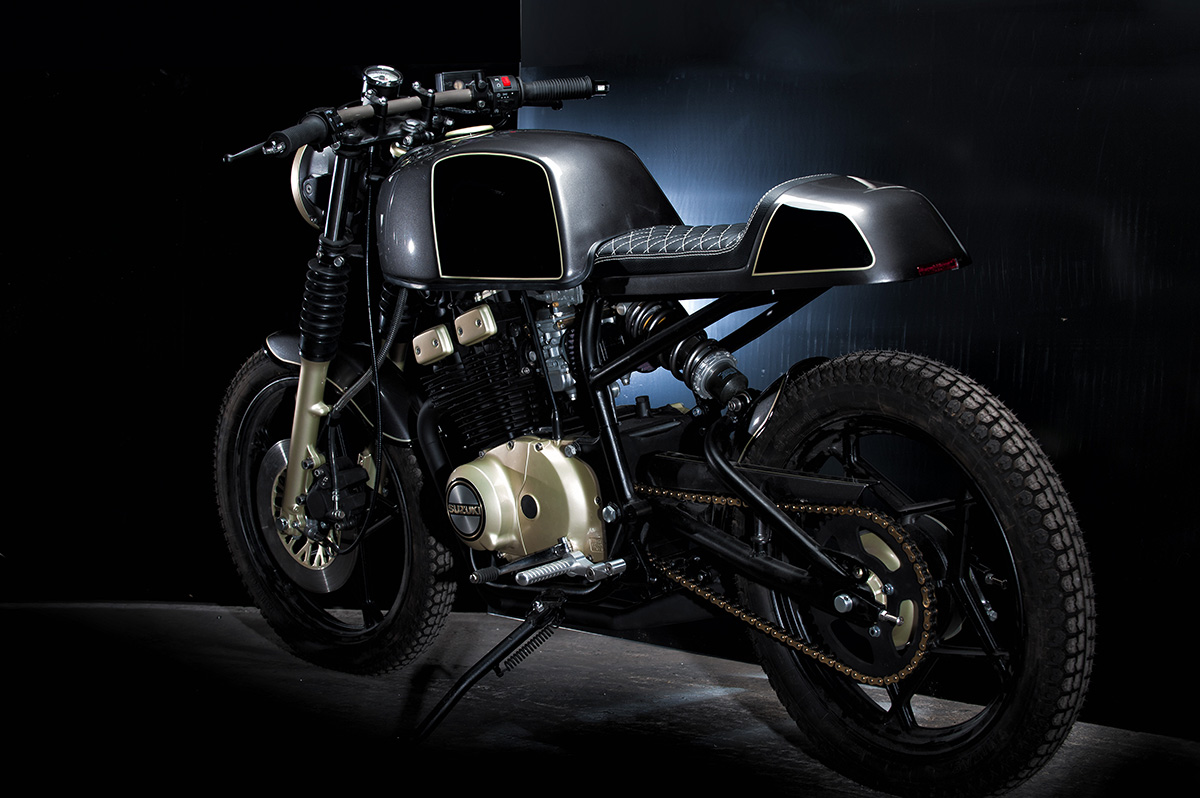 “We found this Suzuki GSX250 on a Greek island named Othonoi in the possession of a retired Lighthouse Keeper. Its journey to our workshop in Athens took 3 months instead of the normal 3 day journey, so it kind of stayed true to the island’s very history. Legend says that Othonoi was the home of the nymph Calypso who stalled Odysseus for seven years, so we believed the bike itself had been lost or forgotten wandering the seas. I guess it was a stroke of luck that it ever arrived!”